In a word, yes. Now is an exceptionally good time to invest in closed-end funds (CEFs) because the average closed-end fund trades at a price well below the value of its portfolio.  Closed-end funds typically trade at a discount to net asset value (NAV), but at present the discounts are unusually large.

What are closed-end funds?  Briefly, they are mutual funds that have a fixed number of shares and trade during the day on exchanges like stocks. They differ from open-end mutual funds that are bought and sold in direct transactions with the fund company at their net asset value (NAV).  They also differ from exchange-traded funds (ETFs) which like closed-end funds also trade on exchanges, but because ETFs can increase or decrease shares outstanding, ETFs trade at prices very close to NAV.

Because institutions such as closed-end funds can borrow at much lower interest rates than individuals, owning closed-end funds is an economically attractive way for individual investors to obtain leverage.  As long as the rate paid on the debt is lower than the return on the assets purchased with the debt, the fund will enhance its return with leverage.  If the opposite is the case, the fund will magnify its losses.  The use of debt increases the risk of a closed-end fund.   About two-thirds of closed end funds utilize some form of debt.  It is more common for bond funds to use debt and less common for equity funds.

For decades, academic researchers have described the behavior of closed-end funds as a “puzzle” in that it presented a clear-cut challenge to the usual assumption of market efficiency.  The central question is “why do CEF prices deviate so dramatically and persistently from NAV?” The NAV is an unambiguous indicator what the CEF’s portfolio is worth. However, standing between the CEF share owners and the CEF portfolio is a layer of management.  This layer of management is compensated by fees, which reduce the value of the CEF shares.  On the other hand, the management may enhance the value of the CEF through its astute trading of the portfolio.  CEFs are usually brought to market through an IPO only if there is a perception that the CEF management has an unusual degree of skill.  The fact that CEFs almost always trade a discount to NAV within a year of their IPO indicates that these initial hopes prove unfounded.  Thereafter, CEF prices reflect the tug-of-war between the hoped-for value that the managers of these funds may be able to add and the fees that they charge for their services.

CEF prices are determined by supply and demand, just like the prices of the underlying assets in the portfolio that go into calculating the NAV.  However, whereas the primary owners of the underlying assets tend to be institutions, the owners of CEFs are primarily individuals.  The latter are presumably more subject to emotional biases. During an IPO, CEFs are heavily promoted by financial intermediaries who are compensated by the CEF issuer, a cost indirectly born by the initial purchasers of the CEF shares.  A cynic may describe the former as wolves and the latter as sheep.  A rational and informed investor would not buy a CEF at its IPO knowing that its price will drift down to a discount to NAV as surely as summer becomes winter.

CEF discounts and premiums continue to be subject to retail investor emotion well after the IPO.  Academic evidence suggests that recent performance influences a CEF’s discount due to overreaction by retail investors.3  Other than at their initial issuance, CEFs tend to trade at a premium to their NAV when the underlying assets are considered both desirable and difficult to obtain, such as closed-end country funds that invest in countries with restrictions on foreign investors, single-state municipal funds with highly illiquid municipal bonds, or high-yield bond funds that own private or illiquid debt.

There would seem to be an arbitrage opportunity between CEFs and their underlying assets.  Why don’t some institutional investors simply buy the CEFs and short the underlying assets and thereby earn a risk-free arbitrage return?  There are several impediments that prevent this.  First, CEFs are thinly traded and even modest transactions can involve significant bid-ask spreads.  Second, the bid-ask spreads for the underlying assets are also very significant in many cases.  Most CEFs focus on relatively illiquid assets, thereby taking advantage of the more stable operating environment the a permanent capital base affords them compared to open-end funds.  Third, there are regulatory limits on the percentage of a fund that a single owner can have before certain disclosures and restrictions start to apply.  Owning a small minority of the outstanding shares in a CEF will still subject the arbitrageur to significant risk that the CEF’s discount to NAV may widen rather than contract.  In the final analysis, CEF arbitrage is just not profitable enough nor scalable enough to attract significant arbitrage capital.

However, the limits to pure arbitrage do not mean that investors of more modest size should not take advantage of the information provided by CEF prices compared to their NAVs.  Several well-received academic papers have shown this information to be potentially quite valuable.2  My own research has shown that NAV discounts in CEFs are exceptionally strong indicators of value and predictors of future performance.  Unusually large discounts to NAV tend to mean-revert back to more normal levels of discount.  When that happens, the returns of CEF investors who bought at a discount will be boosted.

The reason that now is a good time to invest in closed-end funds is the fact that on average their prices are unusually low relative to their NAVs.   The downdraft in the 4th quarter drove NAV discounts to unusually high levels:  closed-end fund prices are well below the net asset values of their underlying portfolios.  The graph below shows the 10-year history of the average discount levels for the major U.S. closed-end fund groups.  Discounts widened during the Great Recession and also when there have been stock market corrections or widespread fears of an economic slowdown since then, including in late 2018. 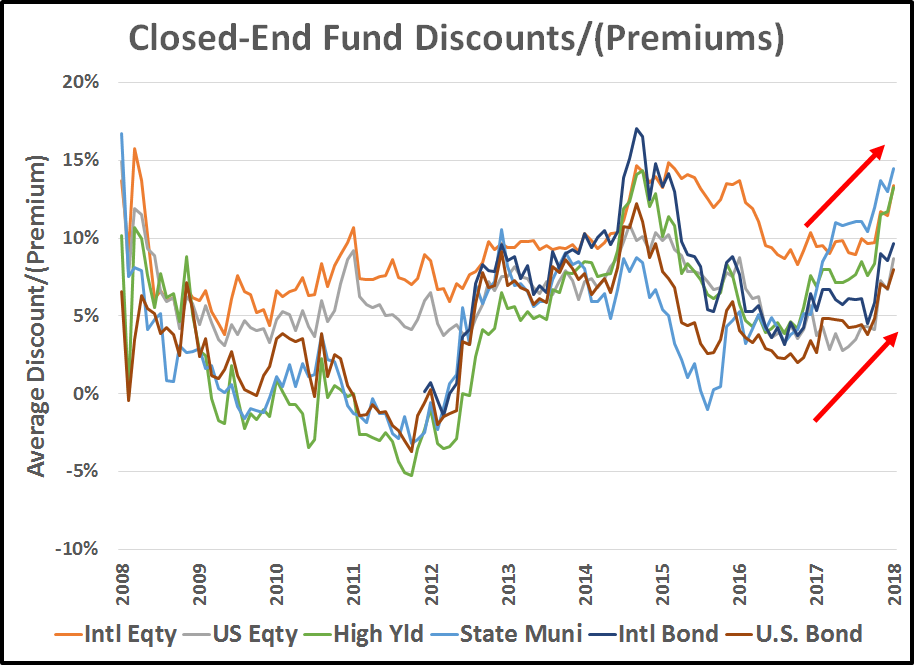 Using high-yield CEFs as an illustration, the graph below shows the history of the average NAV discount for all of the high-yield closed-end funds in the U.S. (Currently there are 59.)  On December 31, 2018, the average NAV discount of this group was 13.2%.  Over the trailing 5 years, the average discount had been 7.9%.  The current level is two standard deviations above average. Statistically speaking, this occurs only about 5% of the time.  The only time when the average discount has been more than two standard deviations above average and then widened much further was during the Great Recession. 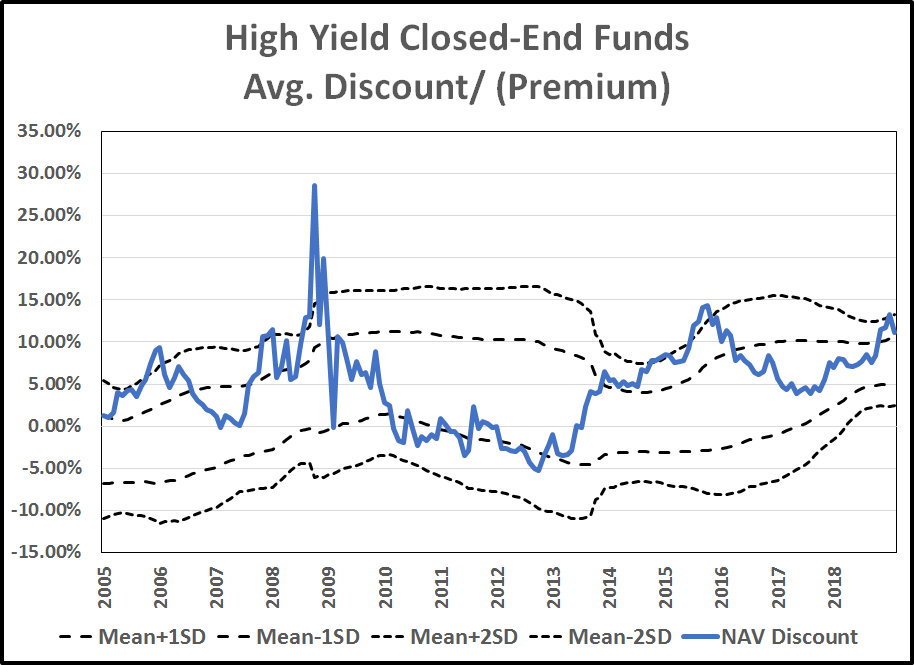 The fourth quarter of 2018 was a classic case for CEF discount widening.  U.S. investors began to worry about signs of a global economic slowdown.  These fears were compounded by a concern that the Fed would continue to tighten monetary policy despite contrary economic signals.  Global stock markets reacted with significantly negative returns. All of these headwinds affected high-yield bonds.  Economic slowdowns tends to increase default risk.  Interest rate increases cause all bond prices to decline, including high-yield bonds.  Negative equity market returns affect high-yield bonds because of their significant sensitivity to many of the same risks that affect stocks, as well as through the convertability of some high-yield debt into equity.

It is logical for high yield bond prices to correct in the face of these adverse circumstances.  However, high yield CEF prices declined much more than did the prices of the assets they owned.  Is this a sign that CEF owners are better at forecasting further problems ahead for high yield bonds than their institutional owners?  Or is it an indication that CEF owners became discouraged and sold at increasingly discounted prices for emotional reasons?  I believe that the weight of evidence is with the latter theory.  The odds favor those willing to go against the crowd.

How can I be so confident that investing in high yield CEFs with unusually large NAV discounts will be a winning strategy? Because I have thoroughly tested it.  The graph below illustrates just one of the tests.  The blue line is the cumulative residual return (net of our proprietary four-factor risk model) of an equal-weighted portfolio (20% each) of the five high-yield CEFs with the largest NAV discounts. The portfolio is rebalanced monthly.  Since 2002, the average residual return (net of risk effects such as equity market and interest rate betas) has been 7.6% per year.  The orange line is the same thing but investing in the five with the smallest (or most negative) NAV discount.  That return has been -7.2%.  The green line is a long-short implementation of the strategy.  Its return has been 14.4% per year.  The results have been both strong and consistent. 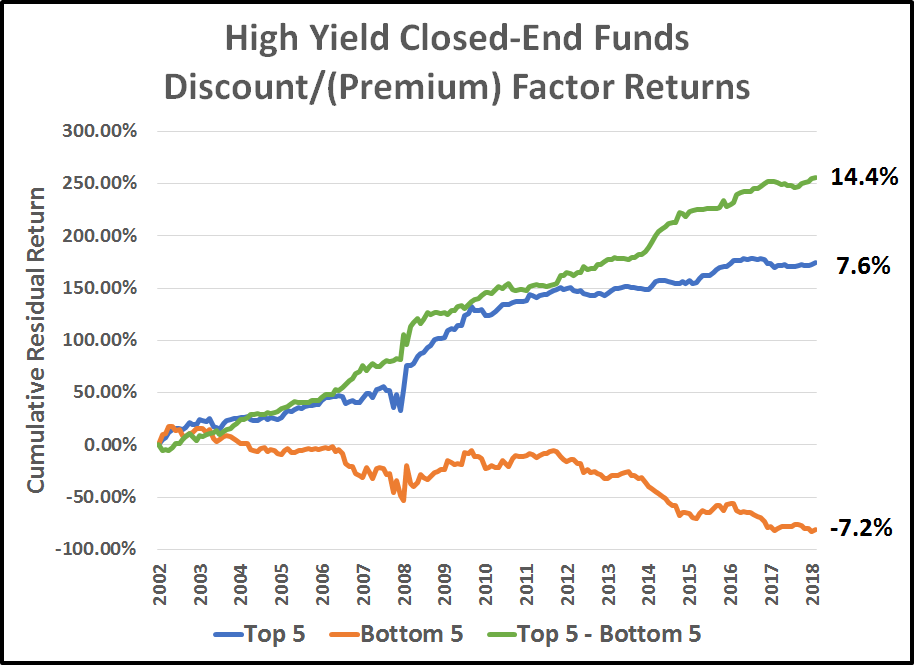 Most other closed-end fund groups show similar results from a strategy of investing in those with the largest discounts to NAV.   Results can be improved further by comparing the current NAV discount to the historical average discount for that CEF, buying only those with an unusually large discount relative to that CEF’s own history.

At year-end 2018, the NAV discounts were larger than average in all CEF groups.  For example, the average discount for single-state municipal bond CEFs was 14.5%.  International equity CEFs (mostly single country funds) were trading at an average 13.4% discount.  Even “plain vanilla” U.S. equity CEFs were 8.7% below their NAVs, on average, and U.S. bond CEFs had an average discount of 8.0%.  The opportunity for creating a diversified portfolio of closed-end funds selling at substantial discounts is unusual and attractive.

2Jeffrey Pontiff, “Closed-end fund premia and returns: Implications for financial market equilibrium,” Journal of Financial Economics, 37 (1995) 341-370.  From the abstract:  “Funds with 20% discounts have expected twelve-month returns that are 6% greater than nondiscounted funds.”  Patro, Picotti, and Wu, “Exploiting Closed-End Fund Discounts:  The Market May Be Much More Inefficient Than You Thought,” 2014 working paper.  From the abstract:  “We find significant evidence of mean reversion in closed-end fund premiums…Our strategy of buying the quintile of funds with highest expected returns and selling the quintile of funds with lowest expected returns yields an annualized arbitrage return of 18.2% and a Sharpe ratio of 1.918.”