The dots are coming!  The Fed is scheduled to release its famous “dot plot” of forecasts of various key economic figures, including the Fed funds rate, tomorrow (Wednesday, March 20th). The reaction of the Fed funds futures market may portend the stock market’s reaction in the days ahead. In this article, we examine the interest rate changes implied by the 6-month Fed funds futures contract as a potential stock market allocation indicator.

The Fed funds rate is the rate at which banks lend their excess reserves at the Fed to other banks in need of increasing their reserves.  As such it directly affects the ability and willingness of U.S. banks to make loans.  It is also a key interest rate that has a rippling effect on many other interest rates.  The Federal Reserve has traditionally made managing the Fed funds rate its primary tool of monetary policy.

Monetary policy changed after the Great Recession of 2008, perhaps forever.  The Fed funds rate was pushed down to an historic low of 0% to .25% and kept near zero until the end of 2015.  Never before had the Fed gone to such extremes to stimulate the U.S. economy, and never for so long, and rarely with so little apparent effect on economic growth.  It did boost the stock and bond markets, however.

After a time, the markets began to grow concerned about when the Fed might began to “normalize” interest rates.  With the growing anxiety came growing attention to any signals from the Fed about its future policy moves.  The Fed funds futures market is the best barometer of the market’s worry about increased interest rates.  Arguably, this factor has been one of the primary drivers of the stock market in recent years.

The market’s gyrations over the past quarter or so illustrate just how important reading Fed tea leaves has become for the market.  The last time the Fed released its “dot plot” (December 19, 2018), the stock market interpreted the three rate increases implied by the year-end 2019 dot with extreme concern and went into a tailspin.  After year-end 2018, Fed Chairman Jerome Powell and other Fed officials started to communicate a much more accommodating tone, with a much lower likelihood of rate increases for 2019.  This sparked the best start of the year for stocks in decades.

Chairman Powell has raised concern that the dot plot is receiving far too much attention. To illustrate, he has used a painting from pointillist Georges Seurat. I have attached a Seurat painting above, “The Eiffel Tower” (1889). Focusing on the individual dots that make up the painting misses the point of appreciating the overall work.  One must stand back and take in the broader picture.  In fact, Power has suggested that the Fed may do away with the dot plot altogether.

Even if they nix the dot plot, the market will still watch the Fed very closely.  Fed activity has always been an important factor affecting the stock market.  When trying to ascertain what the Fed is likely to do in the months ahead, the Fed funds futures market provides a very handy gauge of consensus market opinion, and as such it can be a handy asset allocation indicator for stocks.

Fed funds futures contracts are traded with monthly maturities out as much as 36 months into the future.  However, liquidity for Fed funds futures contracts (as measured by open interest) tends to be highest for nearby contracts.  On the other hand, my objective is to measure expectations with respect to future effective Fed funds rates, with a relatively constant horizon length that will be long enough to encompass at least a couple of Federal Open Market Committee meetings.  Open interest is still fairly good out six months, so I selected that horizon. 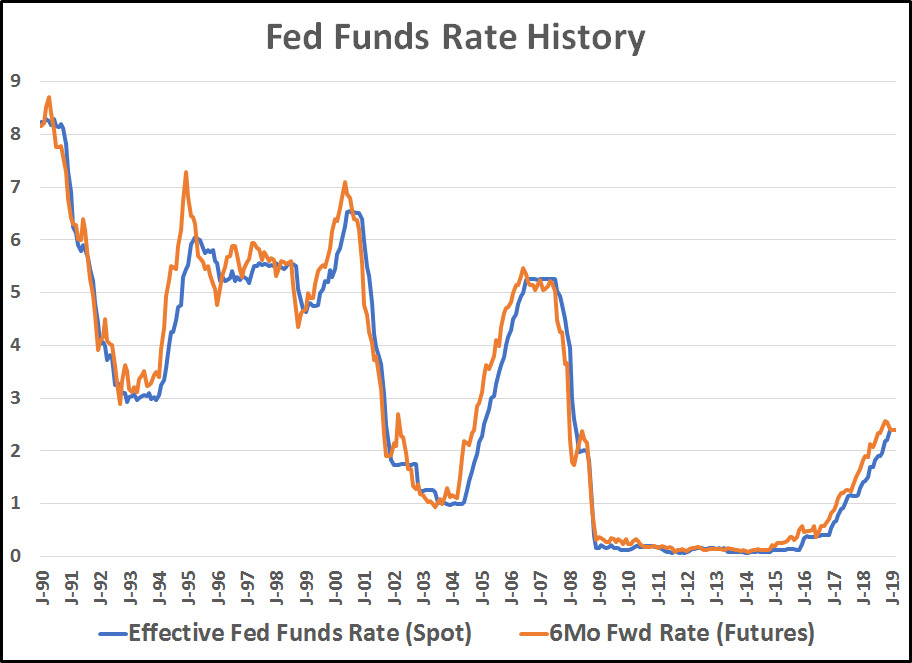 As shown in the graph above, the 6-month forward implied rate is sometimes a bit above the current effective Fed funds rate, and sometimes it is a bit below.  Importantly, changes in direction are usually reflected in the futures market before they happen in the spot market.  This is why using futures is much more effective as an input to a market forecast.  The stock market is driven by expectations, and particularly, changes in expectations. 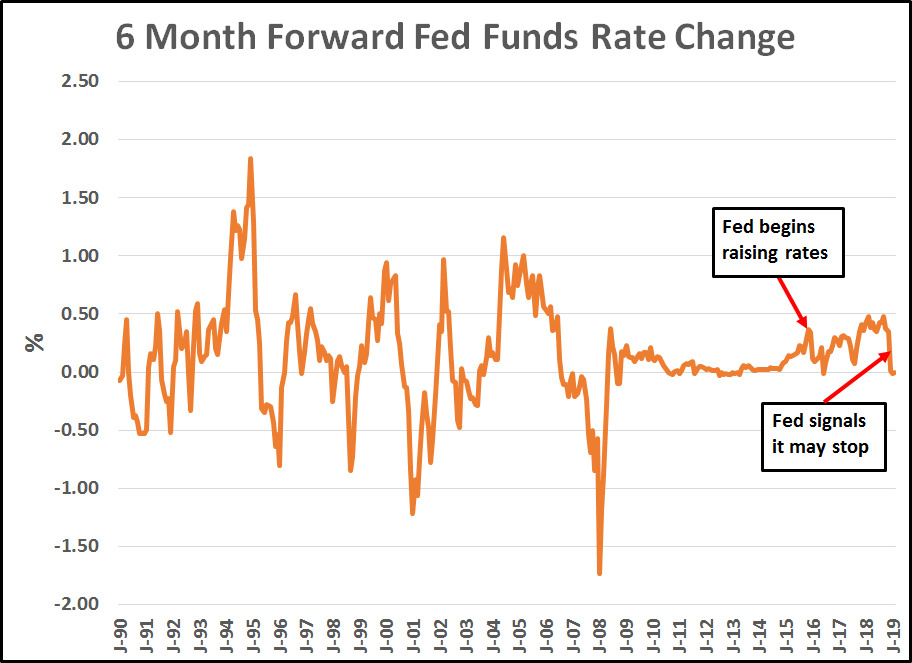 The graph above shows the expected change from the current effective Fed funds rate over the next six months implied by the 6-month forward futures market price.  My presumption is that an expectation of future monetary easing, reflected by an expected decline in the Fed funds rate, is positive for stock market returns, and vice-versa.  (The empirical data confirms my presumption.)  That is, when the orange line is above zero (as it was for several years before the end of 2018), that has a dampening effect on stock market returns.  The fact that the expectation of a further rate hikes has recently dropped to near zero takes away this dampening effect for now.  However, if rate expectations go back up, watch out! 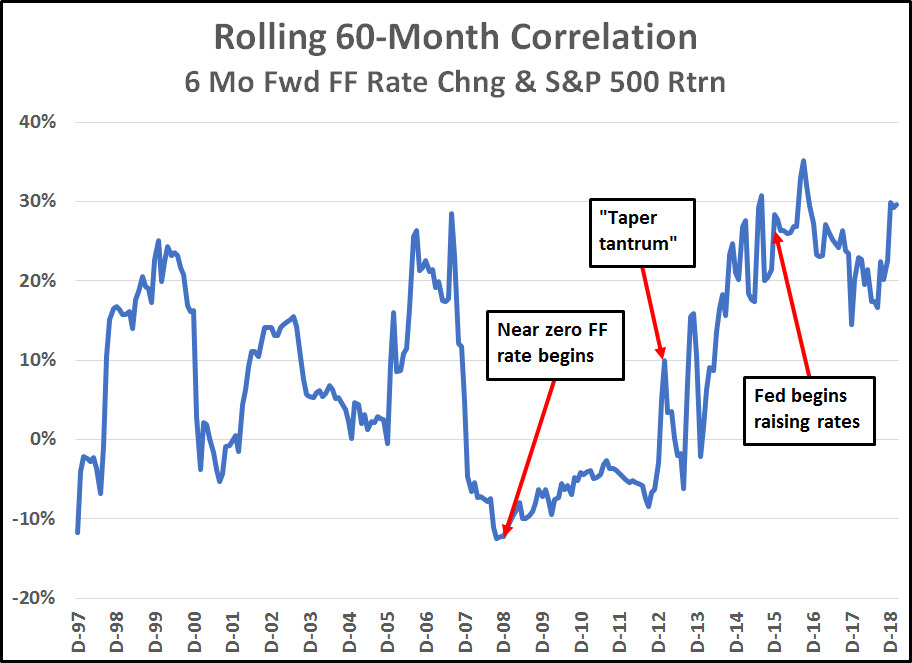 The graph above shows the rolling 60-month correlation between the month-end 6-month forward implied Fed funds effective rate change and the next month’s return of the S&P 500.  The correlation has been mostly positive, particularly in the post-“ZIRP” (zero interest rate policy) era.  At present the trailing 60-month correlation is incredibly high at about 30%, indicating that the stock market has been especially driven by concern about Fed policy in the recent past.

Currently the futures market indicates that there is no expectation that the Fed will move interest rates either up or down over the next six months.  That clears up one of the clouds that had been hanging over the market.  However, given the heightened sensitivity that stocks have exhibited to possible rate hikes, all it would take is an unexpectedly hawkish dot plot to torpedo the stock market.