Long-term bond yields are low by historical standards.  For bonds, current yield = future expected return.  Interest rates have much more room to go up than go down, with the risk of losing money on long-term bonds looming large compared to a very modest increment of yield.  Stay away from long-term bonds until their incremental yields over short-term bonds justify their much higher level of risk. 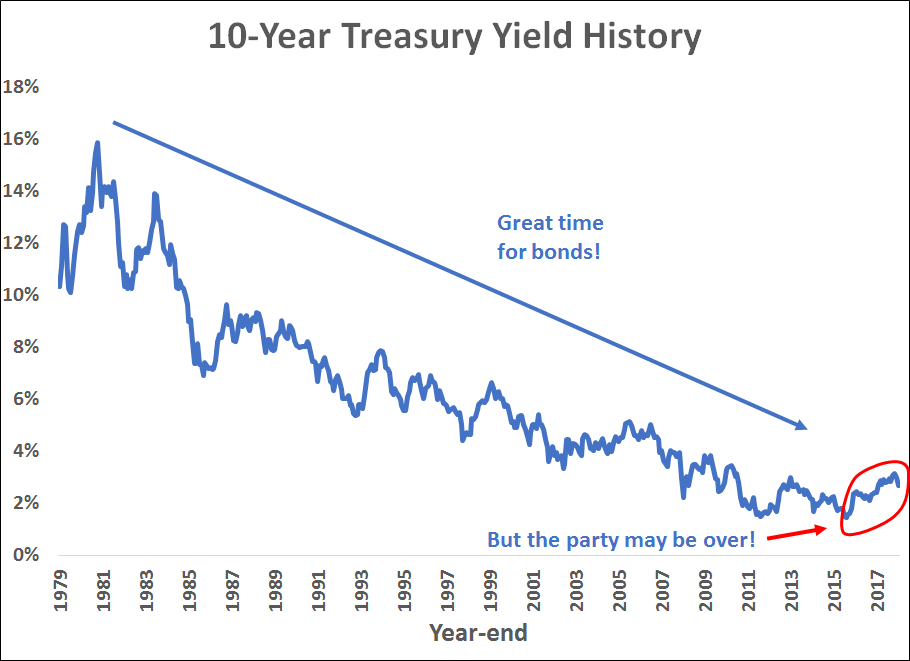 During most of this period, bond investors benefitted from more-or-less continued unexpected declines in interest rates, which meant that in addition to collecting the coupon yield, bond investors saw the prices of bonds being constantly boosted, resulting in unexpected capital gains. However, bond investors would be foolish to count on this continuing (for example, by using an average of past bond returns to forecast future bond returns).    Forecasting the expected return for bonds is very straightforward.  A bond is a loan with specified repayment terms.  Held to maturity, unless the seller defaults, the return is the yield-to-maturity (YTM), which takes into account the current price, the interest coupons, and the principal repayment at maturity.  Thus, the expected return for any bond or bond index is its current yield-to-maturity. 1

As shown in the graph above, recently interest rates have started to climb. While higher yields increase the expected return of bonds, the current owners of bonds suffer during periods when rates are rising.  For example, a perpetual bond with a 4% yield that sold for $1000 in a 4% interest rate environment will see its price decline to $800 (-20%) if the going rate for that bond becomes 5%.  Interest rates and bond prices move in opposite directions.

The sensitivity of a bond’s price to changes in interest rates is measured mathematically with a calculation called “duration.” The current duration of the Barclays US Aggregate Bond Index is 5.8.   This means that if interest rates increase by 1%, the price of the index is expected to fall by 5.8%.  Longer-term bonds have an even higher duration.  For example, the 20+ Year Treasury Bond Index has a duration of 17.6.

What happens to bonds and bond funds when interest rates change?   Below we will use three different Vanguard bond ETFs to illustrate the sensitivity of broad segments of the U.S. bond market to changes in interest rates. 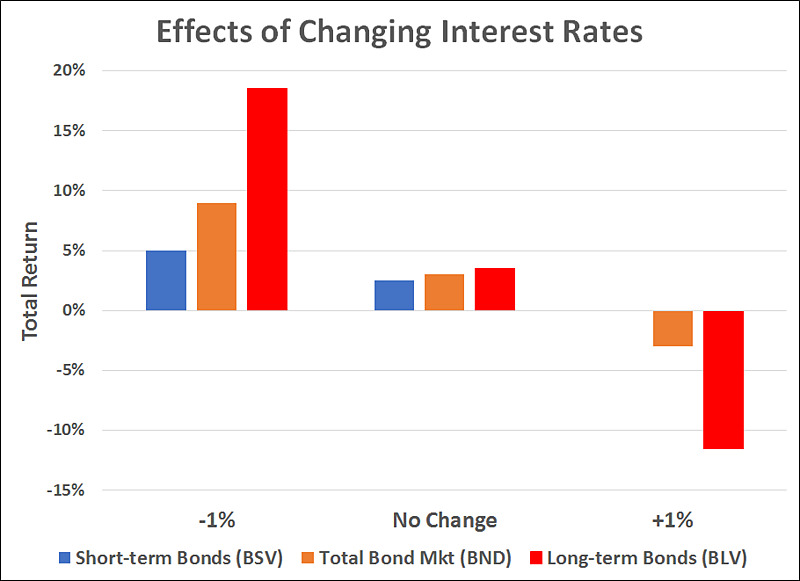 The graph above illustrates what happens to these ETFs if interest rates move up or down by 1% at the end of a one-year holding period.  If there is no change in rates (a good base case assumption), the return is simply the yield-to-maturity (YTM).  If rates decline by 1% (a rather unlikely scenario at present), all three ETFs are assumed to earn their YTM and have a capital gain equal to their duration.  If rates increase by 1% (a more likely scenario), they also earn their YTM, but they have a capital loss equal to their duration.  Given the rather high likelihood of some amount of increase in interest rates over the next few years, the pickup in yield for taking on incremental duration (interest rate risk) appears to be insufficient compared to the risk of losing money, which is very real.

During the Great Recession, the Federal Reserve began aggressively buying up huge amounts of Treasury and mortgage-backed bonds in an effort to drive down interest rates and thereby hopefully boost the economy.  The policy, known as “quantitative easing” (QE), continued for years to help boost the very weak economic recovery.  This unprecedented Fed policy saw the Fed’s balance sheet balloon from under $1 trillion to about $4.5 trillion (see graph below).2  This has had the effect of artificially reducing interest rates and boosting bond prices. 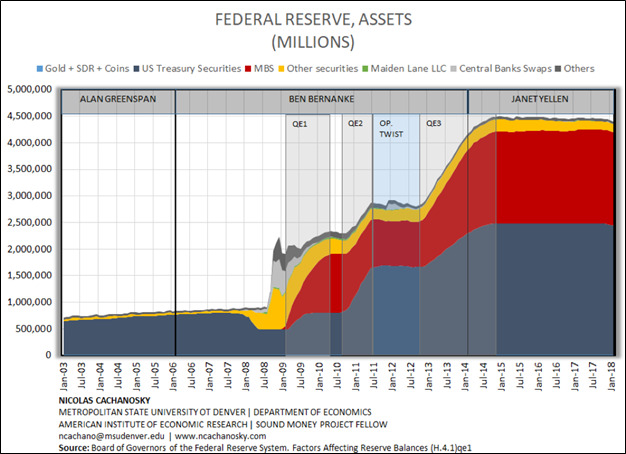 The 10-year artificially-supported market for bonds has now come to an end.  In December 2015, the Fed began to increase short-term interest rates, which it had held down to nearly zero since 2008 (see graph below).  Then, in September 2017, the Fed announced that it would begin to unwind its enormous bond holdings in an effort to “normalize” policy. 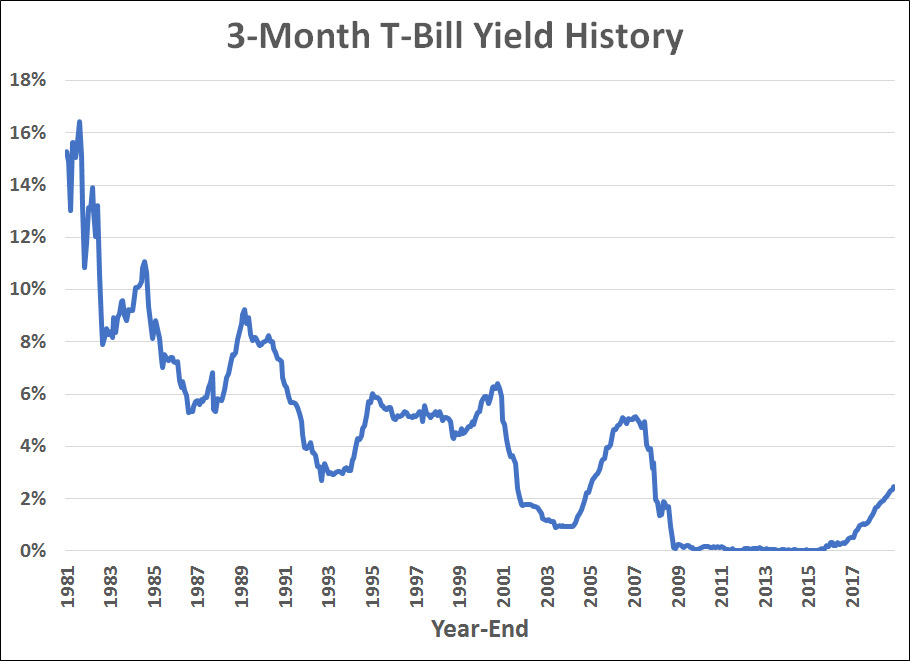 What the end of QE means for bond investors is unclear.  Since QE was unprecedented in the history of central banking, we have no past experience to draw upon.  The entire point of buying all those bonds was to reduce long-term interest rates.  Reversing QE by selling bonds, or allowing them to mature without reinvestment (which has been the Fed’s modus operandi), should logically lead to higher long-term interest rates than would otherwise prevail.

After much criticism and a huge decline in stock prices in the fourth quarter of 2018, the Fed recently announced that it will likely halt the unwinding of its bond portfolio by year-end 2019, leaving its balance sheet much larger than its historical average level.  This “new normal” will mean that the Fed will continue to roll over long-term bonds as they mature, providing ongoing support for the current levels of prices and interest rates for long-term bonds.  Long-term bond yields will not be allowed to increase to the market-clearing level they would have absent the Fed’s buying support.

In the short-run, this new policy will eliminate a potential headwind for long-term bonds.  However, it also means that long-term bond yields will remain artificially low. Essentially, the only investor that is likely to find long-term bonds very attractive at their current low yields is the Fed, and only because the Fed is motivated by politics and policy rather than economics.

1 For some bonds and bond indexes, if the bond gives the issuer the right to call the bonds—which is common for corporate debt—a better measure is the “yield-to-worst” or YTW.  Schwab has a nice short article explaining different types of bond yields here.

2 Federal Reserve Assets graph is from an article on the Seeking Alpha website written by Nicolas Cachanosky, PhD.