The Fed is pulling out all the stops to provide ample liquidity. Stocks have responded. That is likely to continue.

The U.S. stock market just had its best month since 1987.  During April, the S&P 500 gained 12.7%.  Since the low on March 23, stocks are up about 30%. This despite a continued torrent of bad economic news, including an enormous increase in unemployment and the onset of a serious recession. What’s going on? Is the market ignoring reality?

There are always many theories that market commentators use to explain why the market went up or down. They always sound plausible. I’ve heard that stocks rallied in April because they were “oversold.” Or because the market was able to look through the recession to the recovery. Or because Covid-19 turned out not to be the nightmare that some feared. Or because the talk in the commentariat shifted from lockdown to its loosening.

It’s quite possible that all of these things helped to push up stock prices in April. But there is one factor that, at least in my opinion, trumps them all (If you will pardon the expression): The Federal Reserve has been especially vigorous in providing monetary support to the economy and the markets during this time of Covid-19.

During most of its history, the Fed’s primary policy tool has been managing short-term interest rates. On that front, the Fed shot all of its bullets early in the Covid-19 battle. On March 3, the Fed reduced the Fed funds rate by .5% to a range of 1% to 1.25%.  Then on March 15, it cut the rate by a full percentage point to a range of 0% to .25%.  At least so far (unlike central banks in Europe and Japan) the Fed has resisted the idea of lowering interest rates below zero. So, unless and until that changes, the rate change lever of monetary policy can’t be pulled down any further.

But that does not leave the Fed with no further policy tools at its disposal. As it did during the aftermath of the Great Recession, the Fed has been pursuing a policy of “quantitative easing (QE).” This involves the purchase of Treasury and mortgage-backed bonds in an attempt to drive down longer-term interest rates and encourage borrowing and economic growth. (Buying bonds pushes up their prices and pushes down their yields.  Bond prices and interest rates move in opposite directions.) Between 2009 and 2014, three rounds of QE increased the Fed’s balance sheet by an unprecedented $3.7 trillion. (See graph below.)

On March 23, the Fed announced that it would pursue a much more aggressive policy of QE than ever before, purchasing securities at a rate of $125 billion per day.  It has even expanded its purchases to include corporate bonds, even some that are below investment grade (“junk bonds”).  The Fed balance sheet has quickly ballooned to over $5.5 trillion. The rate of growth has been incredible. In the last 6 weeks, it has added over $1.5 trillion in assets, a growth of nearly 40%! 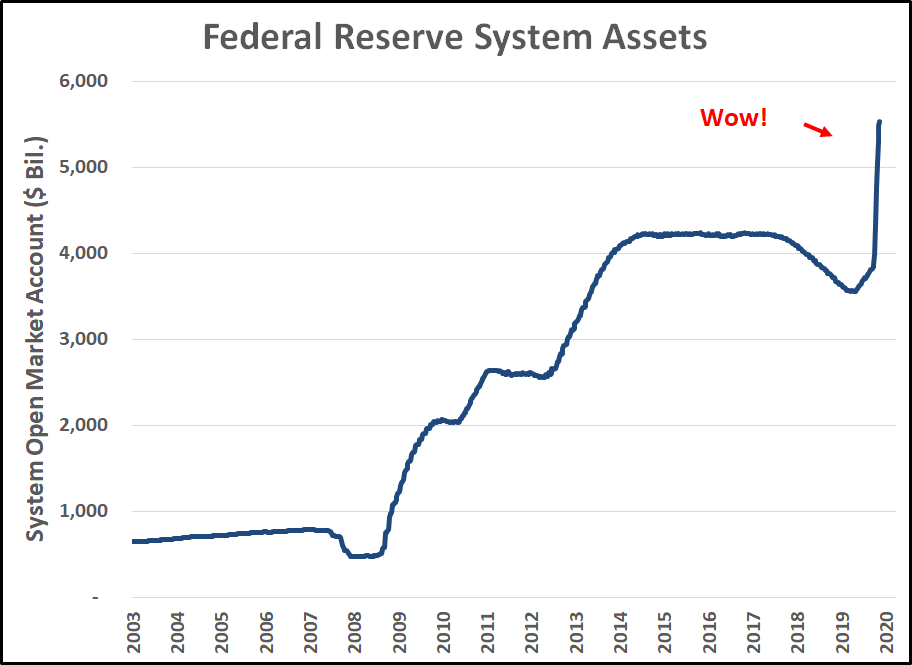 There is a widespread belief among economists that aggressive monetary easing will ultimately have an inflationary impact. However, many believe that the prices of financial assets are inflated first, well before the prices of goods and services. In an earlier article I showed that since the end of the Fed’s “ZIRP (zero interest rate policy)” in December 2015, stock prices have been strongly correlated to changes in expectations for the Fed funds rate.

Now that Fed funds has hit the zero lower bound, changes in the expectations for Fed funds may no longer have much of an effect on stock prices, particularly as a reflection of monetary ease. Instead, it may make sense to look at the effect that quantitative easing has on stock pricing.

Unlike for Fed funds, there is no futures market that provides a gauge of expectations regarding the size of the Fed’s balance sheet. However, the Fed publishes a breakdown of its “System Open Market Account (SOMA)” holdings every week.  This provides a relatively high-frequency reading on its activities. While it is changes in expectations that drive markets, it may be reasonable to assume that the very quick and extremely large increase in the Fed balance sheet that we have seen recently has been mostly unexpected. Probably at least some of April’s stock market rally was in reaction to this extreme move on the part of the Fed.

Empirical analysis of the relationship between percentage changes in the Fed balance sheet and stock market returns confirms that a strongly positive relationship exists, particularly when the Fed pursues a very aggressive policy of quantitative easing. Specifically, the cumulative percentage change in Fed assets over the most recent four-week period is a useful variable in forecasting the return of the S&P 500 over the following four weeks, especially for large positive changes in Fed assets.

The graph below groups four-week percentage changes in Fed assets into bins by size of change.  The most negative changes are on the left side, and the largest positive changes are on the right. The number of observations is depicted with the red line using the scale on the right side. The data is published weekly by the Federal Reserve Bank of New York website and goes back to 2003. Most of the largest percentage increases in assets took place in 2009 and 2020. 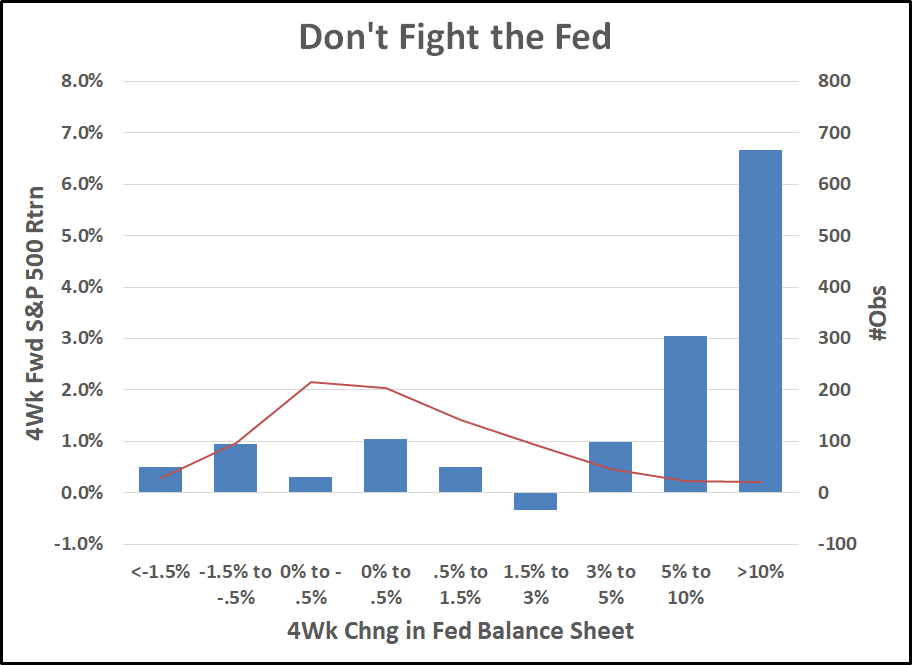 Since it began its latest round of aggressive quantitative easing six weeks ago, the Fed has been growing its balance sheet by an average of over 5% per week, which if sustained would lead to cumulative four-week increases of over 20%! Until this slows down, we will be in the bucket on the far-right hand side of the graph.

Now, it is likely that the initial element of surprise (shock and awe?) that hit the stock market in the early stages of this latest round of QE will wane, and that is likely to weaken its effect on stock returns. Also, there are many factors that effect stock market returns in addition to monetary policy. For example, stock market valuation must be considered. Also, the level of, growth in, and quality of corporate earnings should play a role.

At the present time, while the absolute level of stock prices may be somewhat high, normalized earnings yields relative to current bond yields make stocks appear quite attractively valued. On the other hand, expectations of earnings for 2021 (forget 2020) are still cascading downward, providing a headwind for stocks.

Still, the Fed is the 800-pound gorilla. Fight them at your peril.