I began my investment career at Invesco in the summer of 1987, just in time for the market crash of October in that year.  Back then, we had one small electronic box called a Telerate machine outside the trading room that would allow all of us non-traders to see how our stocks were doing.  On October 19, the Dow crashed 22.6%, its biggest one-day drop ever.  As the day wore on, a lot of us were crowded in front of the Telerate machine, staring in open-mouthed disbelief.

The next morning, our President and CIO called a meeting of all portfolio managers.  Gloom was in the air.  The newspaper headlines were alarming.  As soon as we sat down, an older colleague of mine piped up with a question for our fearless leader:  “What do we do now coach?”  He didn’t miss a beat.  His automatic response was, “We stick to our disciplines.”

In those early days of Invesco, we were mostly a value-oriented institutional investment firm.  (We hadn’t yet bought any mutual fund companies.)  We were known among clients and consultants for our time-tested valuation models and asset allocation disciplines.  Our disciplines indicated that expected returns for stocks had just jumped materially.  We weren’t going to let the emotions of the moment cloud our judgment.  We weren’t going to just avoid selling stocks, we were going to buy them.

We were well-rewarded.  Within two years, the market had surpassed its previous highs, and went on to scale far greater heights.

Many academics who have studied the question of whether the stock market is always rationally priced have concluded that sometimes it is not.   For example, Yale professor Robert Shiller was one of the first academics to point out that stock indexes are far too volatile relative to changes in their underlying fundamentals.  His 1981 article “Do Stock Prices Move Too Much to be Justified by Subsequent Changes in Dividends?” was a thunderbolt against the backdrop of absolute faith in market efficiency among academics at the time.  His book, Irrational Exuberance (2000), which was published at the height of the dot-com bubble, argued that stocks had become grossly overvalued.  A second edition in 2005 included cautionary remarks on a growing housing bubble.  His latest edition (2015) includes warnings on the risks of long-term bonds.  (Shiller won a Nobel prize in 2013.)

Some academics and many investors assume that the market is “efficient.”  If markets are perfectly  efficient, then current asset prices reflect all known information.  At its most extreme, this would be true for both individual securities and for asset classes. It is well known that most actively managed funds fail to beat their benchmark indexes after costs, which is evidence of “micro-efficiency” or the efficiency of individual securities within an asset class when compared to one another. Sometimes this evidence is assumed to apply to whole asset classes (such as U.S. stock or U.S. bonds) as well as to individual securities.

However, there is less reason to believe that asset classes are efficiently priced compared to individual securities. The rationale for this assertion has to do with the “limits to arbitrage:” the fact that asset classes are not subject to effective arbitrage that will drive their prices toward intrinsic value.  Arbitrage can be applied fairly easily to individual stocks or bonds that are mispriced.  For example, overpriced stocks can be sold short, and other related risks, such as market, sector, and industry, can be neutralized with hedging techniques.  That sort of low-risk arbitrage is not possible with asset classes.

Those who study behavioral finance theorize that markets are subject to crowd psychology, and that euphoric pricing bubbles can form that ultimately pop.   Conversely, selling pressure can feed on itself and spiral into a panic in some cases, as it arguably has recently.

A Bit of Rational Analysis

Yesterday (March 12, 2020), the S&P 500 closed at 2,480.64.   That price is down 23.2% since the start of the year.  If the market is pricing stocks rationally, the assumption must be that the aggregate economic value of corporate America has suddenly dropped by 23.2%.  For that to be true, the earnings, dividends, and cash flows of corporate America, from here into infinity, must have dropped by 23.2%!   That is just not credible.

In fact, because interest rates have dropped so much, the rate at which future earnings, dividends, and cash flows should be discounted to derive the current value is much lower.  The decline in discount rates makes the present value of stocks higher, all else being equal.

Yes, earnings will be affected by the coronavirus. We do not know to what extent, and probably won’t for quite some time.  But current pricing assumes that earnings and dividends will fall precipitously and never recover.  Never.  The market is just not able to see past current events.

As is typical, investors are doing what they always do when panicked—piling into safe assets like Treasury bonds. All of this panic buying has driven up the prices and driven down the yield on Treasury bonds—to all-time lows. Yields on Treasuries are so low that they don’t even cover inflation.

Stock dividends have historically grown well above the level of inflation.  That’s one reason why, normally, stock dividend yields are lower than bond yields, usually by quite a lot.  But not since The Great Recession, when the Fed drove interest rates down to historic lows and kept them there. The Fed buys Treasury bonds because of policy and political goals, not because they are a great return/risk investment.  Arguably, no rational, economically-motivated investor would buy Treasuries at these levels.

Meanwhile, the dividend yield of the S&P 500 has shot up to the highest spread ever over the 10-Year Treasury yield. 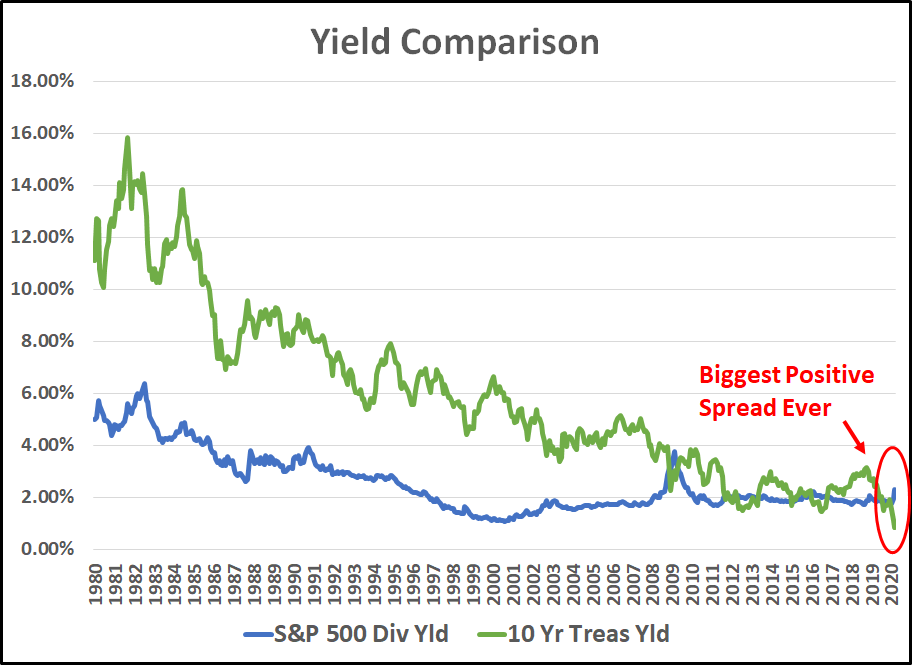 The 10-Year Treasury had a yield of .85% as of yesterday’s close (3/12/2020).  Consensus expectations for inflation are at about 2.0% (having come down in the last few months from a recent high of about 2.6%).  That means that buyers of the 10-Year Treasury are willing to risk losing 1.15% in real purchasing power every year for the next 10 years.  Maybe investors are betting that inflation will fall dramatically and stay low for 10 years.  But probably most buyers of Treasuries are not thinking 10 years out.  They just want safety of principal, and they want it now, regardless of the expected return.

But eventually, things will return to normal, and owners of 10-Year Treasuries will be locked into a combination of low return and high risk.  The duration of the 10-Year Treasury is 9.28.   That means that if interest rates increase by 1% (back to where they were at the beginning of the year when the 10-Year Treasury was yielding 1.91%), they will lose 9.28% in principal!  Things have become insane. 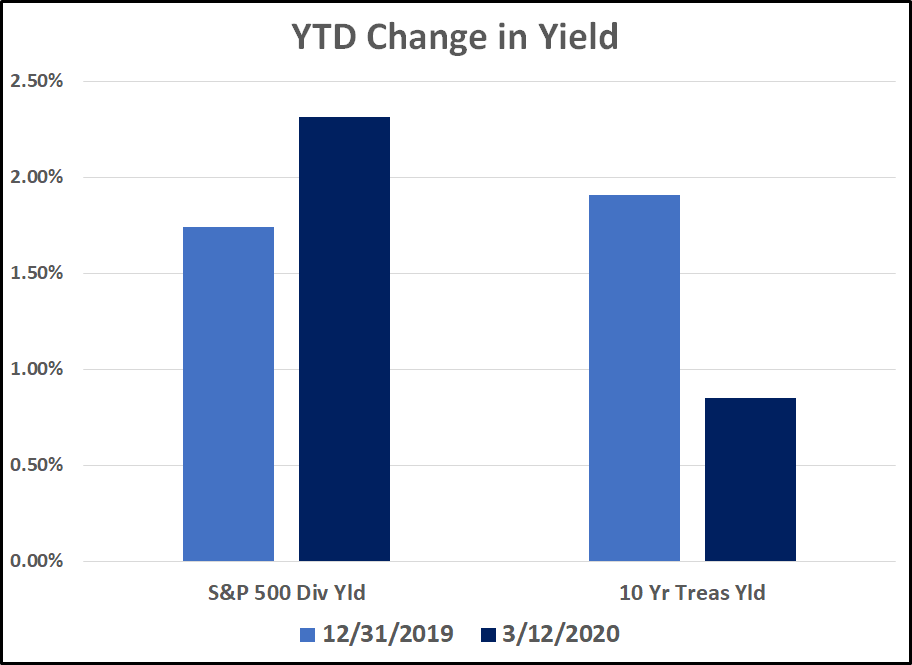 As of last night’s close (3/12/2020), the dividend yield of the S&P 500 was 2.31%.  Unlike bond yields, dividend yields are not locked in.  Yes, they can go down during a recession.  For example, the peak-to-trough decline in dividends for the S&P 500 during the Great Recession was about 25%.  But even if S&P 500 dividends decline by 25% in the months ahead, the dividend yield will still be 1.79%.  That’s still quite a bit higher than .85% for the 10-Year Treasury.  And over the long-term, stock dividends have always grown a lot faster than inflation.