The picture above is from the 2016 Philadelphia Marathon. It nicely captures the thrill of finishing the race.

The goal for most marathon runners is not to win, but to finish.

Long-term investing is like a marathon. To finish the race you have to push through and keep going despite the pain and fatigue.

Stock and Bond Prices are Down

The truth is, the markets are constantly estimating what may happen in the future and pricing that into stocks and bonds. U.S. capital markets are extremely competitive and efficient at pricing in current expectations. The way the events would unfold in 2022 may seem obvious now in hindsight, but rest assured, it was far from obvious in real time.

You may be tempted to give up and sell now. After all, Federal Reserve officials are continuing to talk about further increases in interest rates. Won’t that lead to further declines in stocks and bonds?

Maybe. But given how clearly the Fed has communicated that intention, is should not surprise the markets. In other words, further rate increases are probably already reflected in today’s prices for stocks and bonds.

Yields are Up, Expected Income is Up

The good news is that the reason stock and bond prices are down is largely because interest rates are up. Another word for interest rates is “yields.” The income that stocks and bonds will generate has increased. And after all, income generation is the whole point of investing. We save and invest in order to pay for future expenditures, for most of us, that means our living expenses in retirement.

The table below shows that even though prices have declined, the actual dollar amount of income for bonds (based on yield-to-maturity) and even stocks (based on dividend yield) is actually up, even though the dollar value of the investments has declined! 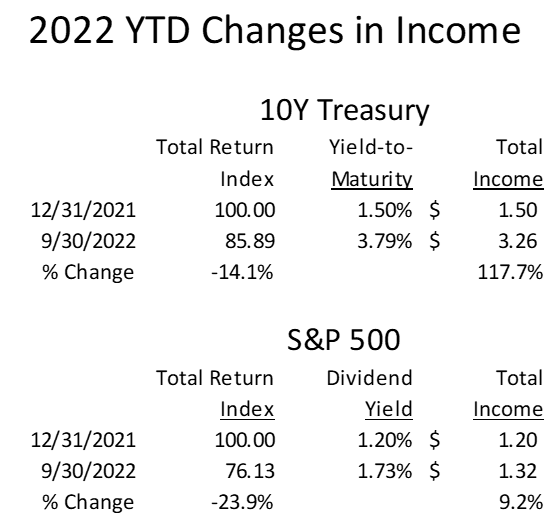 Similarly, a $100 investment in the S&P 500 at the beginning of the year is now worth only $76.13 because the total return has been -23.9%. But the dividend yield has increased from 1.20% to 1.73%. (I’m using the trailing twelve-month dollar amount of dividends paid divided by current price, but there are other ways of estimated dividend yield.) In other words, the dividend yield has gone up because the dollar amount distributed by S&P 500 companies in the form of dividends has not fallen by 23.9%. In fact, it has increased slightly. So, the yield as a percentage of price has increased noticeably. This has more than made up for the price decline, and in dollar terms, the expected income of that investment has climbed from $1.20 to $1.32.

Stock Growth May Be Down a Bit

Of course, while yield is the only driver of total return for bonds, stocks have another important driver of total return—growth. There are various ways of forecasting long-term growth for stocks.  I use a 50/50 combination of trailing long-term growth rates for dividends per share and consensus economic growth forecasts. Both of these growth measures have slowed a bit this year. Dividends are not growing quite as quickly as before. And consensus GDP forecasts have been trimmed to reflect the looming possibility of recession, which in turn has dampened expectations for future near-term corporate earnings. As a result, my forecast of long-term growth for the S&P 500 has declined from 6.8% to 5.8%.

However, both of these are relatively minor short-term effects. I know of no reason to make substantial cuts in the long-term growth rate for U.S. corporations. It usually takes a devastating war or a political revolution to really ruin the productivity and dynamism in an economy. While these can’t be entirely ruled out for the U.S., they are not likely. Even using the lower growth forecast, the expected return for the S&P 500 is still 7.5% (1.7% dividend yield + 5.8% long-term growth). Unlike the yield for bonds, that return is likely to be comfortably above the rate of inflation.

Eyes on the Prize

The whole point of investment is to generate long-term income to pay your bills. From that perspective, the attraction of bonds has increased dramatically because of the rise in interest rates. You may have lost money in bonds this year, but the ability of those bonds to support you in retirement has greatly increased.

The math for stocks is similar, if less dramatic. The dollar amount of the dividend yield of the S&P 500 has actually increased slightly, despite the price decline. If we have a recession, the growth rate may slow for a time, but there is little reason to doubt the ability of corporate America to reward investors over the long-term.

Don’t be distracted or discouraged by short-term price volatility. Keep your eyes on the prize—long-term income generation.