Long-term bond yields are at or near all-time lows by historical standards. For bonds, current yield = future expected return. Interest rates have much more room to go up than go down, with the risk of losing money on long-term bonds looming large compared to a very modest pickup in yield. I recommend that you stay away from long-term bonds until their incremental yields over short-term bonds justify their much higher level of risk. That means that you should not buy any broad bond market fund, and if you already own one (as most people do), you should sell it and reposition into a short-term bond fund. 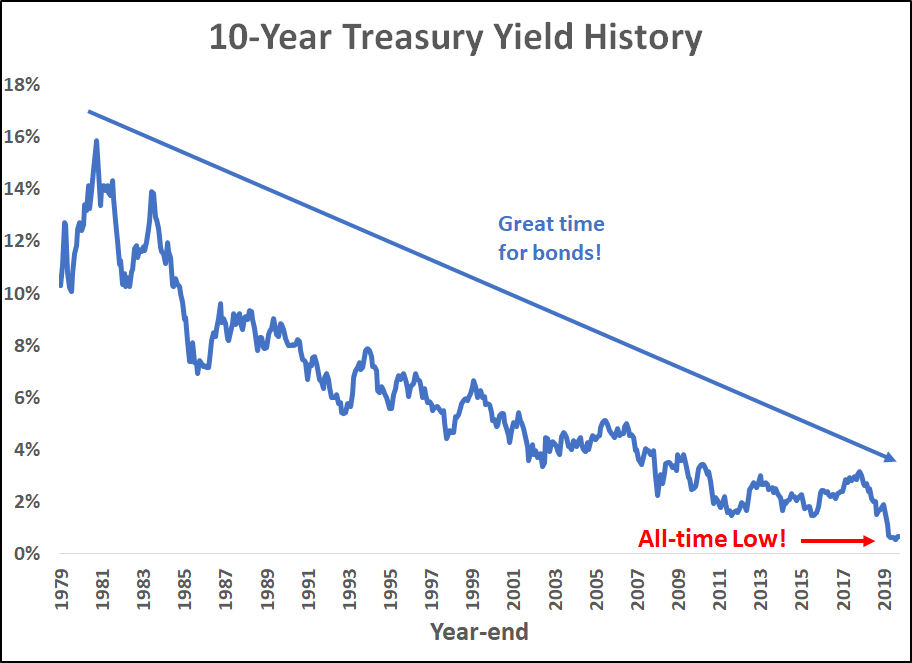 During most of this period, bond investors benefitted from more-or-less continued unexpected declines in interest rates, which meant that in addition to collecting the coupon yield, bond investors saw the prices of bonds being constantly boosted, resulting in unexpected capital gains. However, bond investors would be foolish to count on this continuing (for example, by using an average of past bond returns to forecast future bond returns).

Forecasting the expected return for bonds is very straightforward. A bond is a loan with specified repayment terms. Held to maturity, unless the seller defaults, the return is the yield-to-maturity (YTM), which takes into account the current price, the interest coupons, and the principal repayment at maturity. Thus, the expected return for any bond or bond fund is its current yield-to-maturity. 1

The sensitivity of a bond’s price to changes in interest rates is measured mathematically with a calculation called “duration.”  The current duration of the Barclays US Aggregate Bond Index (the U.S. bond market) is 6.1.  This means that if interest rates increase by 1%, the price of the index is expected to fall by 6.1%.  Longer-term bonds have an even higher duration.  For example, the 20+ Year Treasury Bond Index has a duration of 18.0.

What happens to bonds and bond funds when interest rates change?  Below we use three different Vanguard bond ETFs to illustrate the sensitivity of broad segments of the U.S. bond market to changes in interest rates. 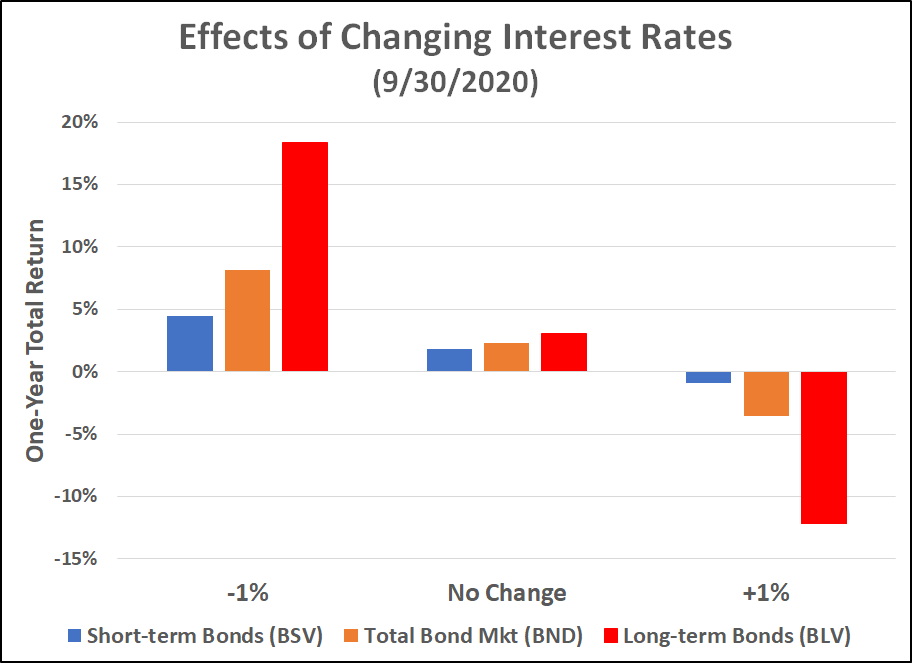 The graph above illustrates what happens to these ETFs if interest rates move up or down by 1% at the end of a one-year holding period. If there is no change in rates (a good base case assumption), the return is simply the yield-to-maturity (YTM). If rates decline by 1% (a rather unlikely scenario at present), all three ETFs are assumed to earn their YTM and have a capital gain equal to their duration. If rates increase by 1% (a more likely scenario), they also earn their YTM, but they have a capital loss equal to their duration. Given the rather high likelihood of some amount of increase in interest rates over the next few years, the pickup in yield for taking on incremental duration (interest rate risk) appears to be insufficient compared to the risk of losing money, which is very real.

Reason #3:  The Risk in the U.S. Bond Market is Very High

The U.S. bond market, as measured by the Bloomberg Barclays Aggregate Bond Index (a broad index of most government and investment-grade corporate bonds) has a higher duration than ever before. That means its level of interest rate risk has never been this high. 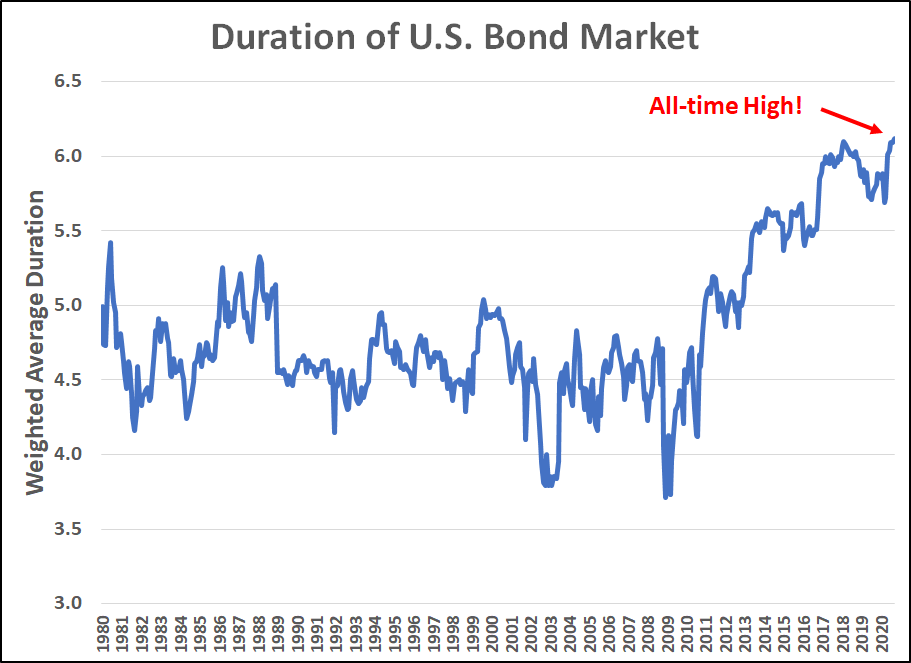 Broad U.S. bond index funds are weighted by market capitalization. Bond issuers are generally savvy and act in their own perceived best interest. When you buy the overall bond market by buying a broad bond index fund, you are taking the other side of the trade. Not surprisingly, bond issuers have been taking advantage of historically low interest rates to float bonds with longer maturities, locking in these low funding rates and consequently driving up the duration of the overall market. The Fed is willing to buy the entire bond market because they have monetary policy (and political) objectives that drive them. They are not motivated by economic incentives, which are paltry at best. Why anyone else would buy long-term bonds is the question.

Reason #4:  The Yield Pickup for Risk is Extremely Low

Not only are yield low in absolute terms across the maturity spectrum, but the yield curve is a great deal flatter than normal. Thus, the additional yield on offer for taking on incremental interest rate risk is quite a bit lower than normal, as shown below. 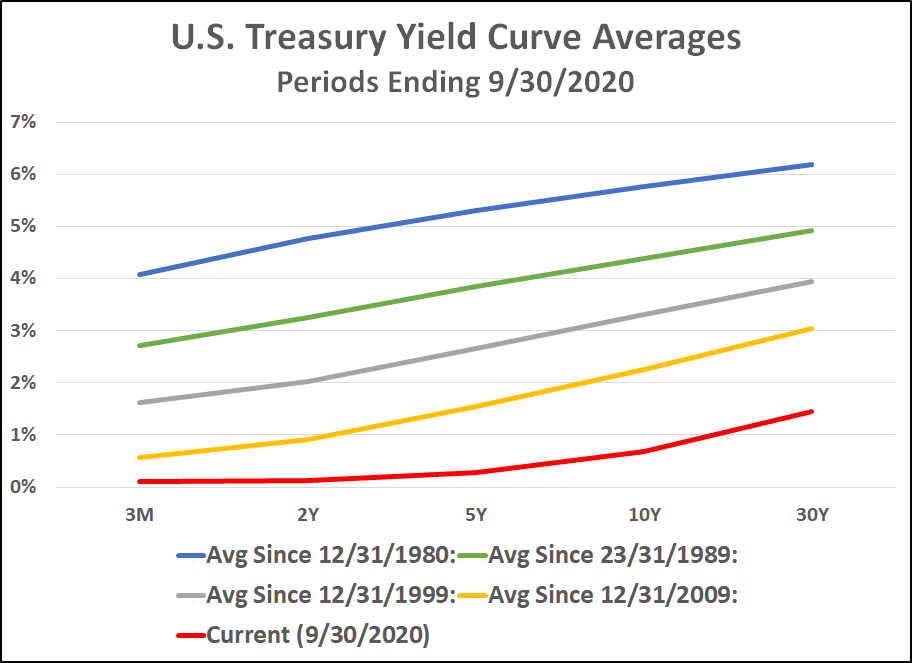 In fact, just to make it clearer, the graph below shows that the incremental yield per year of additional duration (interest rate) risk is lower than it has ever been before. 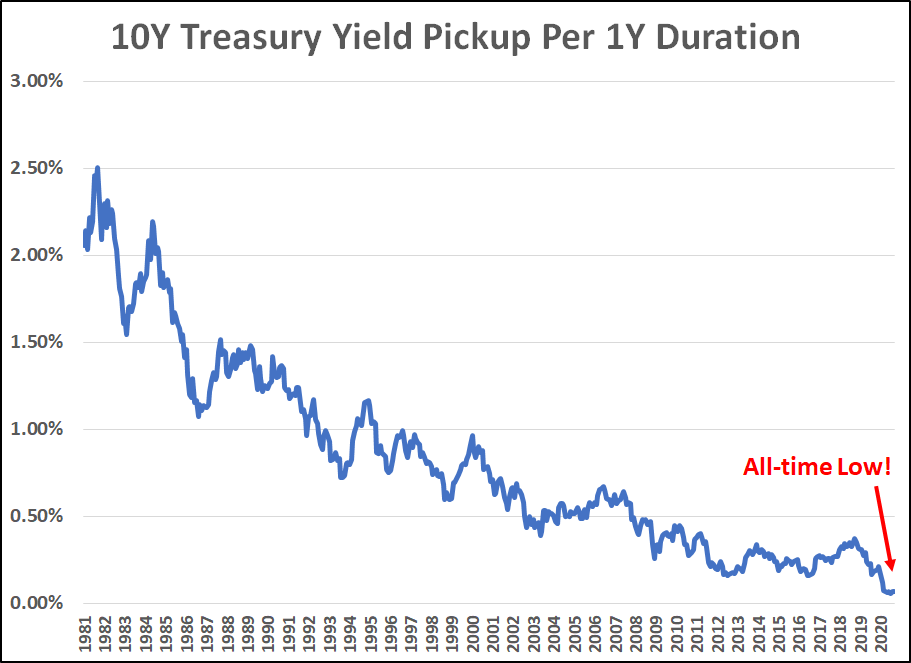 Following the Great Recession, the Federal Reserve began aggressively buying up huge amounts of Treasury and mortgage-backed bonds in an effort to drive down interest rates and thereby hopefully boost the economy. The policy, known as “quantitative easing” (QE), continued for years to help boost the very weak economic recovery afterwards.

The Fed had barely started to unwind this policy when the novel coronavirus hit. Almost immediately, the Fed lowered short-term interest rates to zero once more. The Fed’s next move was to “double down” on quantitative easing by increasing both the amount and the scope of bond purchases. Whereas in the past purchases had been limited to government bonds, now the Fed began to purchase corporate bonds, including some high-yield (“junk”) bonds. The Fed’s balance sheet ballooned from under $1 trillion to about $6.5 trillion (see graph below).  The aggressive purchase of bonds has had the effect of artificially reducing interest rates and boosting bond prices. 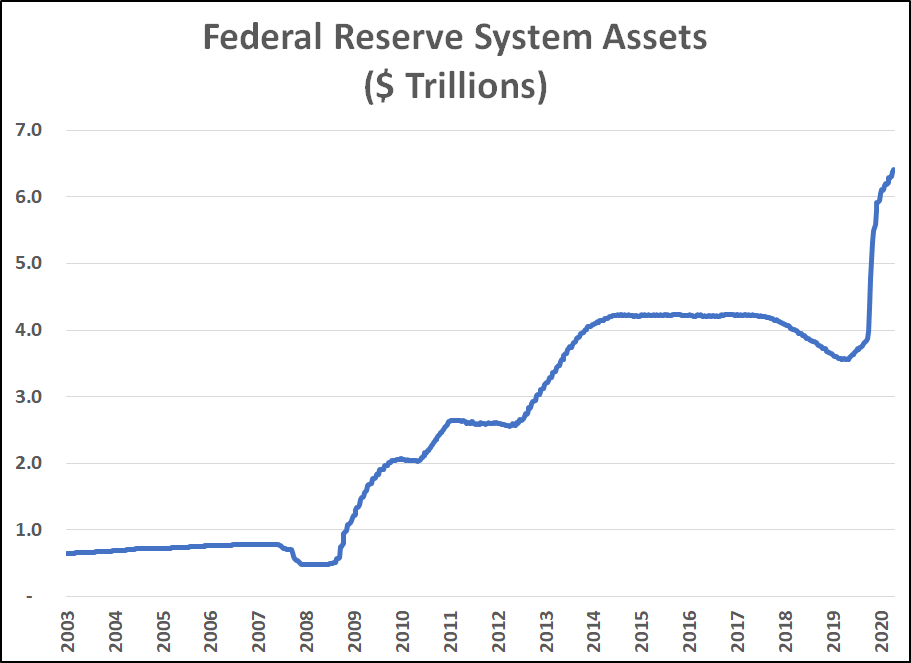 Not only is the absolute level of the Fed’s balance at a new high, but the rate of change (the upward slope of the line shown above) has never been so aggressive. This artificial support to the bond market will weaken to the extent that the Fed even slows down its asset purchases, much less reverses them and returns to a more normal monetary policy regime.

Arguably, interest rates should stay low as long as the Fed keeps them low. And the Fed is likely to keep them low until the economy shows signs of recovery from the Covid-19 recession. One of the pointers that the Fed is looking for is an inflation rate that rises above 2% and stays there for some time. It may be tempting to think that you will see the end of the party coming and be able to get out of long-term bonds before interest rates start to rise and bond prices start to fall. However, markets are discounting mechanisms and the bond market is likely to price in any expected reversal in Fed policy before it happens. The spark that causes it could be an inflationary surprise. Or a sudden weakening of the U.S. dollar. Or a shift in tax or fiscal policy. Or any number of unforeseen events.

The future is always murky. However, the facts in front of us are clear. The expected return for long-term bonds (yield) is abysmally low, the level of interest rate risk has never been higher, and the only reason that bond prices are as high as they are is that the Fed has artificially pumped them up.

1The Yield-to-maturity calculation assumes that bond coupon payments can be re-invested at the YTM rate, which is likely to be somewhat higher than prevailing money market rates.  However, this is a minor and second-order consideration.  Also, for some bonds and bond indexes, if the bond gives the issuer the right to call the bonds—which is common for corporate debt—a better measure is the “yield-to-worst” or YTW.  Schwab has a nice short article explaining different types of bond yields here.