Why Invest with Hedge Funds?

Hedge fund managers are the most highly compensated of all investment professionals. Compared to other institutional portfolio managers (such as managers of mutual funds and pension portfolios), hedge fund managers are widely considered to be the cream of the crop. They are more highly compensated because their fee structures are high. And much of their compensation is in the form of “incentive fees” which are earned only for positive performance. They are highly incentivized to perform.

Hedge fund managers are also able to be more flexible with their investments. Unlike other institutional portfolio managers, their portfolios tend not to hug any particular benchmark index, like the S&P 500. Rather, they invest according to their convictions. A large percentage of most institutional portfolios are “passive” positions purchased to more closely replicate the benchmark index and thereby lower tracking error (the performance difference between the portfolio and the benchmark). Hedge funds, which typically have no benchmark index, do not have these “dead weight” holdings.

The combination of incentive compensation and investment flexibility leads sophisticated investors such as foundations, endowments, large pension plans, and wealthy individuals to invest in hedge funds in search of “alpha,” or risk-adjusted excess return. Although hedge funds typically fall short of the market’s return during time periods when stocks are up, their low risk means that often they are able to provide a positive alpha. Hedge funds that do not provide alpha tend to go out of business.

Why Invest in a 13f Hedge Fund Replication ETF?

Those who have studied hedge fund performance have found that a large portion of the gross alpha of hedge funds is consumed by their relatively high fees.  For example, one well-respected study by Ibbotson, Chen, and Zhu found that during the 1995-2009 time period, hedge funds achieved an average gross return of 11.13% which broke down into 1) fees of 3.43%, 2) net alpha of 3.00%, and 3) risk-related return of 4.70%.

Not only are hedge funds expensive, they are also full of structural problems that limit their appeal to investors.  First, even if their underlying assets are perfectly liquid, many hedge funds have limited liquidity for their investors through provisions such as gates, lockups, and notification requirements,. Second, investors in hedge funds give up control of their money and have to trust in the independence and honesty of the hedge fund’s custodian and/or administrator. As we saw with Bernie Madoff, this doesn’t always turn out to have been a good idea. Third, hedge funds are not very forthcoming or transparent about the risks they are taking in the portfolio, particularly with respect to the amount of leverage used. As we saw with Long-Term Capital Management, sometimes leverage can blow up a fund unexpectedly.

Wouldn’t it be better for investors if they could capture some of the alpha of hedge funds without paying the high fees and having to put up with the unattractive risks and restrictions? That is the basic idea behind the “hedge fund replication” ETFs that have been launched in the past few years. Some of them seek to replicate the “betas” of a hedge fund index. The largest of these is IQ Hedge Multi-Strategy Tracker ETF (QAI). It uses other ETFs to capture the risk exposures that they determine would have most closely duplicated the returns of the benchmark hedge fund index. Other funds that following a similar strategy of quantitatively-derived hedge fund benchmark replication are ProShares Hedge Replication ETF (HDG) and iM DBi Hedge Strategy ETF (DBEH).

Some hedge fund replication ETFs seek to capture some of the alpha of hedge funds by owning some of the same stocks they do. These funds rely upon the fact that the SEC requires all managers with more than $100 million in assets to report their long positions each quarter by filing Form 13f. (They are not required to report their short positions.) Two of the oldest and largest such ETFs are Global X Guru ETF (GURU) and AlphaClone Alternative Alpha ETF (ALFA). Both GURU and ALFA were launched in mid-2012, so they have been around a while. The subject of today’s article, Goldman Sachs Hedge Industry VIP ETF (GVIP), is a relative newcomer to this group, having been launched on November 1, 2016.

Despite its more recent launch, GVIP has been able to gather more AUM (assets under management) than its two older competitors. In addition, its expense ratio is somewhat lower, and its bid-ask spread is considerably lower:

GVIP’s investment methodology is also somewhat different from its competitors. Whereas both GURU and ALFA attempt to identify the best hedge fund managers to replicate, GVIP takes what might be called a “crowdsourcing” approach. It includes the 13f holdings of all hedge fund managers that appear to be fundamentally-driven. They do this by eliminating the funds that hold fewer than 10 positions—presumably because they are “activist” hedge funds—and those that hold more than 200 positions—presumably because they are “quant” hedge funds. Extremely small hedge funds with less than $10 million in AUM are also eliminated. The Goldman Sachs Hedge Fund VIP Index upon which the portfolio is based holds equal-weighted positions in the 50 U.S.-listed stocks (including ADRs) most frequently identified as among the top 10 holdings of the final universe of fundamental hedge fund managers.

These top 50 “Very Important Positions” (VIPs) reflect the consensus judgment of all fundamentally-based U.S. hedge funds. Because of the breadth of the sample, GVIP is much more oriented towards younger funds and smaller hedge fund managers. There is some research to support the idea that younger and smaller hedge funds on average provide higher returns, even after adjusting for downside risk:

(Source: Update to “An Examination of Fund Age and Size and Its Impact on Hedge Fund Performance” by Meredith A Jones, The Journal of Investing, Spring 2009)

Investment managers are required to file 13f reports within 45 days of quarter-end. Therefore, GVIP rebalances on a quarterly basis, usually about 6 days after quarter-end. This frequent rebalancing helps GVIP capture the ever-changing market emphases of the more than 650 hedge fund managers in the final manager universe. (13f filings are done by managers, not funds. Often, managers will have more than one hedge fund.) On the other hand, portfolio turnover is not ridiculously high. GVIP’s 2019 prospectus says that the fund’s turnover was 103% for the 12 months ending August 31, 2019. This also indicates that turnover rate for the hedge fund managers’ holdings is not so high that a 45-day reporting lag is likely to significantly degrade the value of the holdings information.

Risk and Return Analysis of GVIP 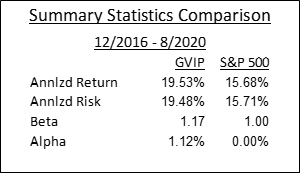 GVIP fell along with the overall market during the coronavirus panic of  February and March, but it has recovered more strongly since then: 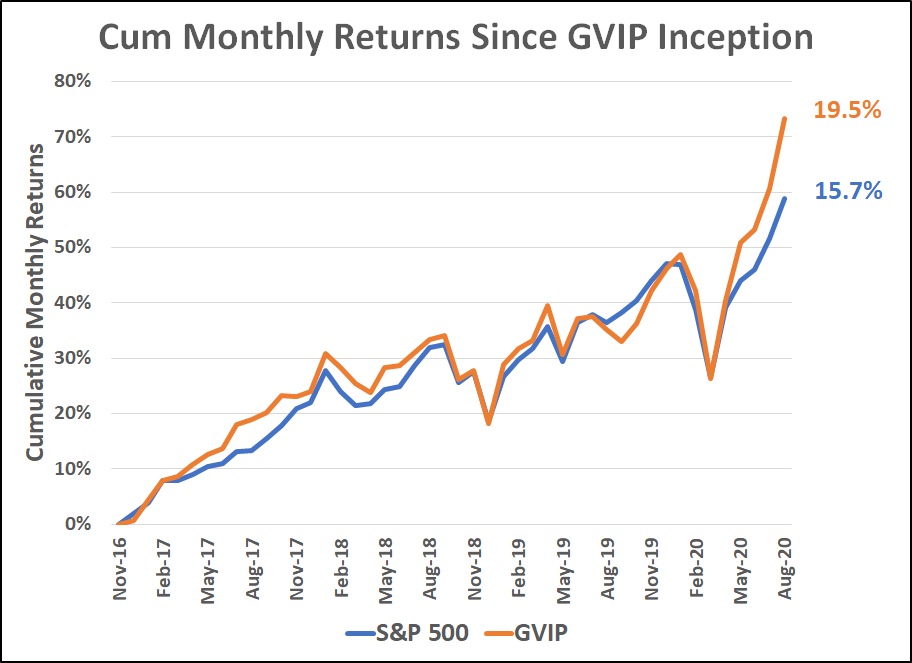 Perhaps unsurprisingly, GVIP currently has a large over-weighted position in technology compared to the S&P 500. No doubt this has contributed significantly to its relative outperformance. Still, sector allocation is arguably as much a part of active management as stock selection. 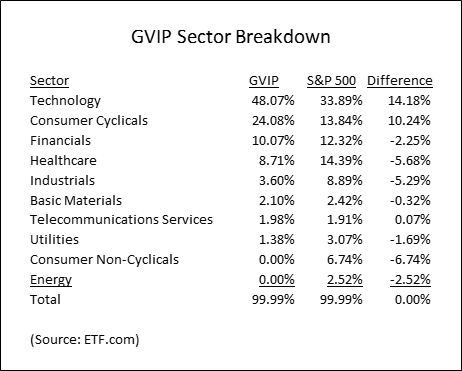 Rather than use in-sample statistics to measure alpha, I prefer a more dynamic and robust approach that controls for four major risk factors simultaneously. To determine whether GVIP has historically generated an alpha, or risk-adjusted return, I start by measuring the sensitivity of GVIP's return to four risk factors that capture much of the risk common to most ETFs:

I use exponentially-weighted 36-month rolling multiple regressions to measure these risk factor sensitivities, or betas. GVIP started trading on November 1, 2016, so the first risk factor beta estimates are for November 30, 2019, 36 months later. 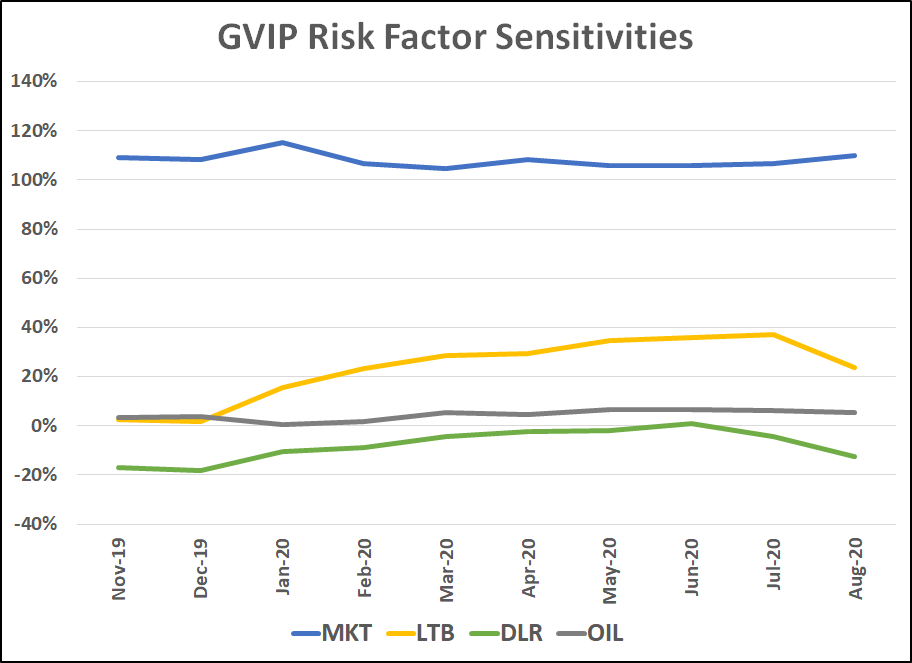 As shown in the graph above, GVIP's MKT beta (blue) is by far its most significant risk factor sensitivity. This is not surprising for a stock fund. The average MKT beta has been 1.08, in keeping with but somewhat below the 1.17 in-sample equity beta. Bond market risk (LTB) has been on a general uptrend and has averaged about .23. Non-dollar holdings result in a negative exposure to the DLR risk factor, which has averaged -.08. OIL risk has been fairly insignificant, in keeping with the fund’s current weighting of zero in the Energy sector (shown above).

Simultaneously estimating and controlling for all four risk factors provides a sharper picture of the fund’s risk exposures than a simple one-factor equity market beta risk model which must lump all risk exposures into one factor. Also, re-estimating risks at each month-end further enhances the accuracy of the risk estimates. Compared to the full in-sample market beta of 1.17, the four-factor model has an average MKT beta of 1.08 since November 2019, with other risk factors capturing some of the risk that the one-factor model (erroneously) assigns to market risk.

Armed with these dynamic risk factor betas, it is a straightforward task to disaggregate the fund’s return in according to its risk factor exposures. The return of the risk factor for a given month is simply multiplied by the estimated beginning-of-month risk factor beta to calculate the return from that risk factor. For example, GVIP’s MKT beta estimate on January 31, 2020 was  115.1. During February, the S&P 500 returned -8.59%. Therefore, GVIP’s MKT return for February 2020 was -9.58% (-8.59% x 1.151). 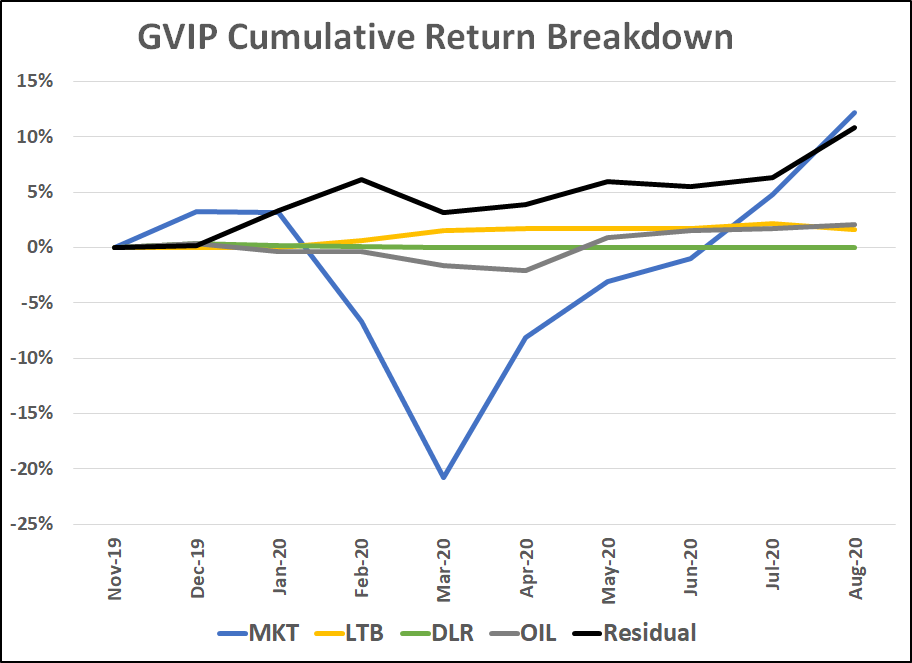 Importantly, residual return, or return not explained by risk factor sensitivity, was 10.8% cumulatively. That is an amazing amount of alpha in just nine months!

Granted, nine months is a very short time period. Furthermore, GVIP’s current holdings appear to be aligned with the tech and large growth/momentum trade. This could reverse if value stocks come back strongly in the economic recovery that will play out in the coming months.

On the other hand, if leadership does rotate to value and away from growth, it seems likely that hedge fund managers will adapt quickly. Indeed, the rationale for GVIP is based upon the assumption that hedge fund managers as a group will seize upon opportunities very quickly, and that following their lead will be rewarded, on average, over time. At least thus far, GVIP’s performance provides evidence in favor of that assumption.