Next to the stocks vs bonds allocation, the U.S. vs international stocks decision is the most important for most portfolios.  Unlike the 60/40 traditional stocks/bonds mix, there is no well-recognized default position for this choice.  I recommend a middle path between two extreme views, with significant flexibility in tactically implementing around the long-term strategic allocation target.

After deciding how much to allocate to stocks vs bonds, the next logical decision is how much to allocate to U.S. stocks vs international stocks.  There are two primary schools of thought with respect to this decision.  Those who believe in the efficiency of the global stock market argue that the optimal portfolio is a representative slice of the overall global equity market, which tends to be around 50% U.S. and 50% international.  Many academics would fall into this category.  Those who believe that the U.S. stock market is superior to other markets would urge an allocation of 100%, or nearly that, to U.S. stocks.  Warren Buffett and Jack Bogle famously hold this point of view.

My position is in between these two extremes.  I believe that a strategic allocation to international stocks should generally constitute roughly 25% to 33% of the overall stock allocation for a U.S. investor.  By strategic allocation I mean the expected long-term average allocation.  However, I would also recommend allowing for quite a wide tactical variability around the strategic target at any point in time.

One reason that I do not support the idea of following the overall global stock market in its U.S. and international weights is that I believe the global stock market is not completely “efficient.”  Let me explain.  Markets are “efficient” to the extent that their prices accurately reflect all known information.  For markets to be efficient, there must be enough trading by well-informed traders to drive prices to their intrinsic fundamental values.  The ability of informed traders to sell short overpriced securities is very helpful in this regard.  So too is the ability of capital to flow easily and freely to the highest return/risk opportunities.

Even if no legal barrier exists, there is a well-documented tendency for investors to exhibit a “home market bias” whereby they dramatically over-weight investments in their domestic stock market compared to its global capitalization weight.  There are many reasons for this, but most have to do with the familiarity of domestic companies, bourses, and regulations.  Most people are just more comfortable investing close to home.

Whether they are regulatory or behavioral, these barriers to the free flow of capital across borders means that capital can get “bottled up” within a country, driving down local returns on capital.  This is especially likely to occur in countries with comparatively high savings rates, which can make capital more plentiful and therefore not as valuable.

Global information flow is also subject to some barriers and limitations.  Obtaining information about U.S. stocks is quick, easy, and cheap compared to many international stocks.  For one thing, not all investor information is available in English.  Also, analyst coverage tends to be thin in many international markets.  Public disclosure of company financials may not be as frequent or complete in many foreign markets compared to the U.S.  These considerations contribute to the costs and risks of international investing.

There are also other risk-related reasons for under-weighting international stock markets.  Compared to the U.S., many other countries treat international investment capital with disrespect.  Local laws and customs may favor domestic interests.  The rule of law may be weak.  Insider trading may be rampant.  Governments may default on debts or change laws to make equity capital worthless. They may suddenly devalue their currency, or it may become devalued over time due to profligate government spending and subsequent inflation.  Investing internationally is fraught with risks.

In addition to the higher costs of obtaining information (if it is even available), there are other added costs that pertain to international investing.  Transaction costs tend to be higher.  Global custody can be expensive.  Taxes and fees are often quite a bit higher.

Finally, there are liability hedging reasons for U.S. investors to prefer U.S. investments.  Most investment is intended to fund future consumption, such as retirement living expenses.  For U.S. residents, most of these future expenses will be in U.S. dollars.   U.S. stocks may be better at hedging U.S. dollar inflation risk than international investments which are in other currencies.

Reasons to Invest Internationally:  Breadth, Growth, and (Above All) Diversification

On the other hand, completely avoiding all international equity investments may miss some very attractive opportunities.  U.S. GDP is only about 24% of global GDP, and U.S. population is only about 4.4% of global population.2  Economic growth rates in other countries are often much higher than in the U.S.  This is often particularly true for emerging and frontier markets, which also tend to have a lower correlation2 with the U.S. stock market, providing an important diversification benefit. 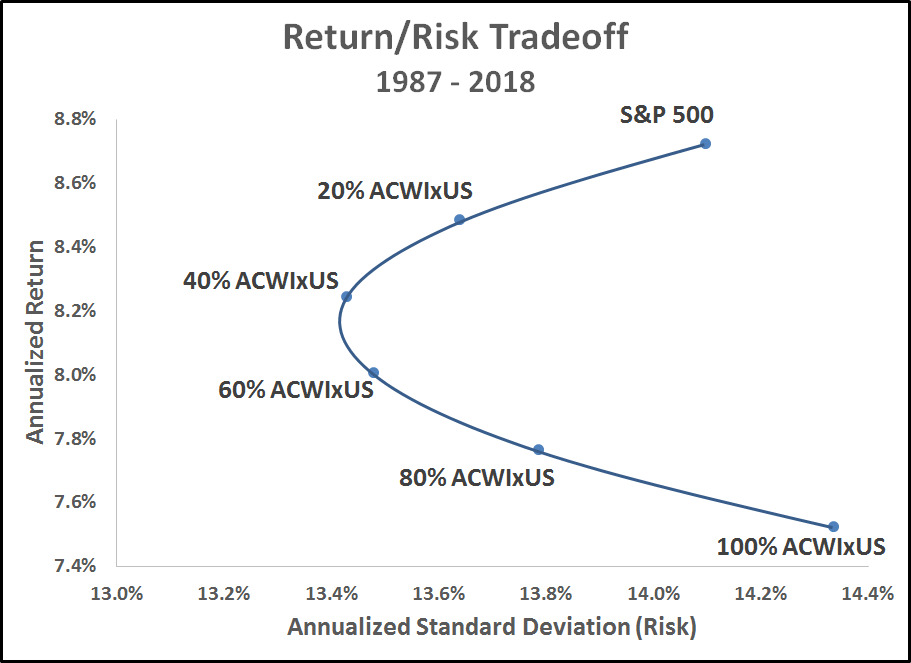 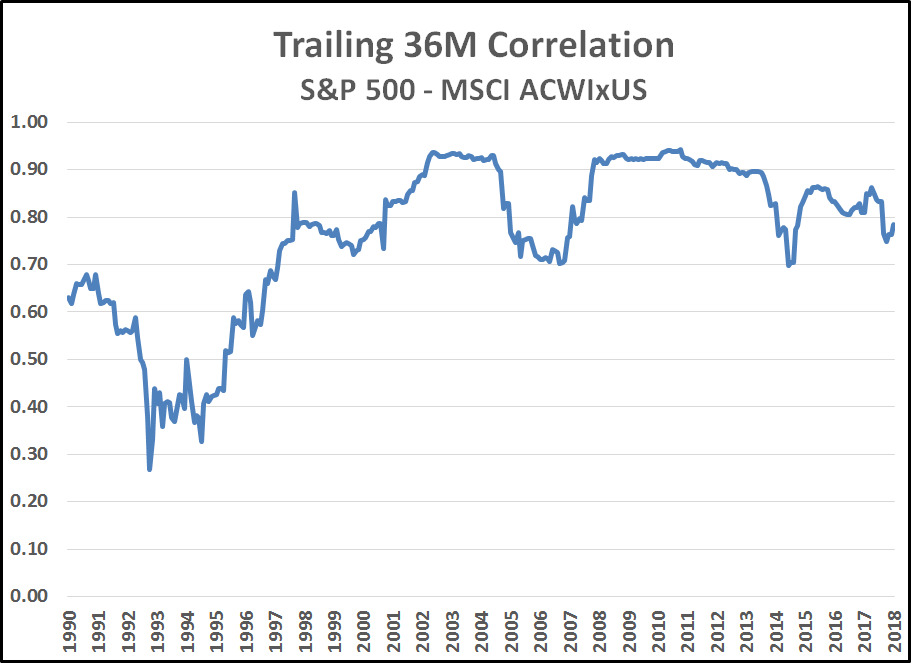 We do not know what the returns for U.S. and international stocks will be in the future, but we can be confident that there will be some diversification benefit from investing internationally.  As long as the correlation between the two asset classes is less than one, that will be the case. The graph above shows that since 1998, the correlation between the two has been between .70 and .95.  The higher correlation since the turn of the 21st century is not surprising because of the two large market downturns suffered during this period:  The bursting of the Internet Bubble and the Great Recession.  During market corrections, “all correlations go to one,” and much of the hoped-for diversification benefit evaporates. 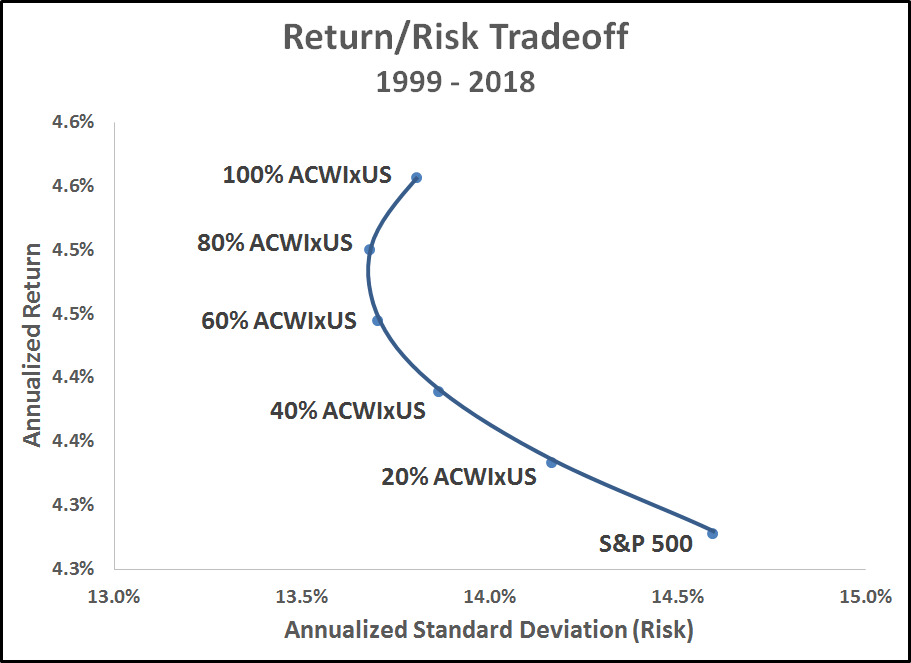 Still, even during this higher-correlation time period there was a meaningful diversification benefit.  Since in this case international stocks outperformed, the optimal mix favored international stocks, as shown above.  This points out how time period-dependent the “ex-post” (after the fact) results are.  Since we cannot know future (“ex-ante”), when setting strategic targets, I believe it is best to be guided by these long-term principles:

1 Countries that currently have capital controls include China, Brazil, Indonesia, Russia, Taiwan, and Argentina.  Many emerging market countries have used them in the past and could reimpose them if they believe conditions warrant.

2 YCharts for GDP data and WorldoMeters for population data.