Similar to, But Different Than, Gold

I recently wrote an article that recommended investing in gold.   Silver is the second most popular precious metal after gold, and many of the reasons for investing in one apply to the other. In fact, their similarities raise the question of whether they are too similar and therefore redundant.

In fact, as shown in the graph below, while their returns are certainly similar, they are different enough to warrant investing in them separately. The graph below depicts the “r-squared” between gold and silver, which is a measure of how much of the return of one is explained by the return of the other. That’s why r-squared is also known as the “coefficient of determination.” On average, gold’s return explains about 62% of silver’s return and vice-versa. Recently, the r-squared has declined to about 57%. So, only a little over half of the return of silver is explained by the return of gold. They are different. 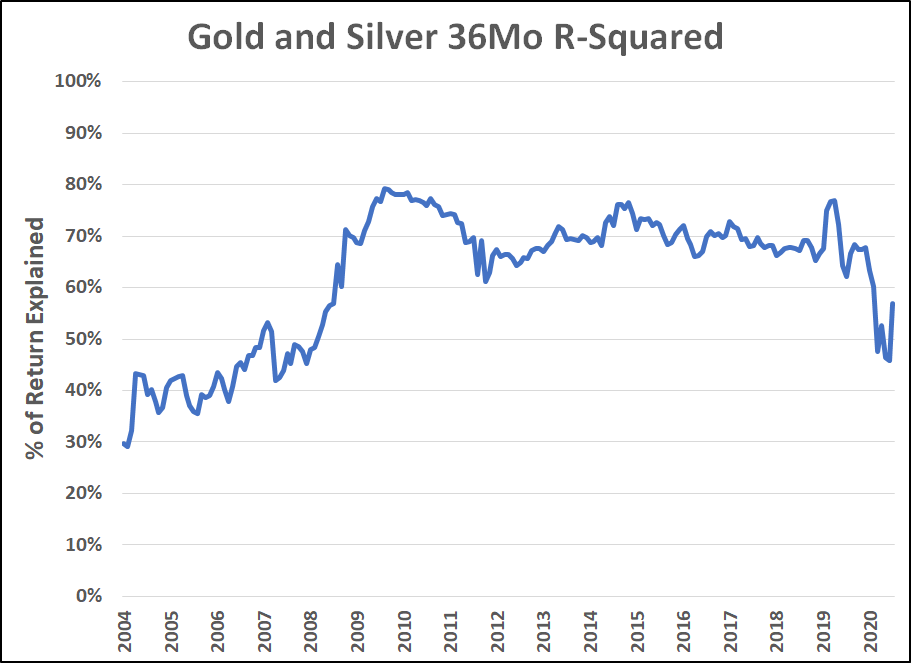 The graph below shows the same r-squared statistic, but this time instead of gold, the relationship is with the S&P 500. Clearly, very little of the market’s return explains the return of silver. This illustrates the fact that silver does a very good job of diversifying market risk, since the two are virtually unrelated. On average, the S&P 500 explains only about 5% of the silver’s return. 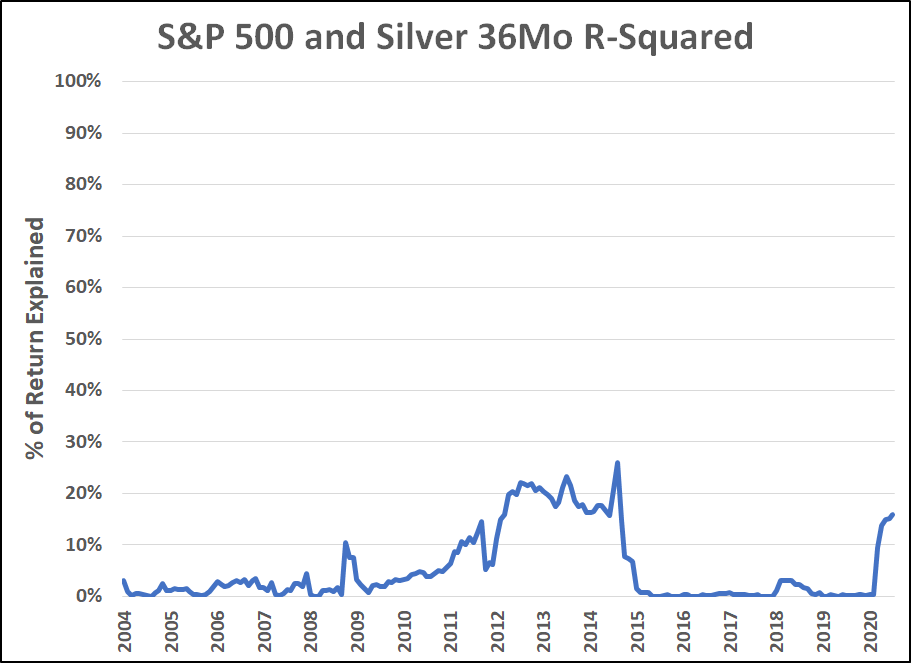 Silver also does an excellent job of diversifying the U.S. dollar. Both precious metals and the dollar are “safe haven” stores of value, and to some extent compete for that role with investors. Like gold, silver can provide protection for those periods when the dollar declines in value, as it has this year. With the blowout fiscal deficits and unprecedented monetary expansion since the Covid-19 pandemic, many analysts expect further weakness in the dollar in the months and years ahead.

The graph below depicts the correlation between the U.S. Dollar Index, a measure of the value of the U.S. dollar relative to a basket of major currencies traded as futures contract on the ICE exchange, and silver. Correlations vary between +1 and -1. Negative correlations, such as shown below, indicate excellent diversification potential. When two assets have a negative correlation, combining them in a portfolio reduces volatility, since when one “zigs” the other tends to “zag.” Most U.S. investors have the vast majority of their investments in U.S. dollar-based assets.   Adding silver would lower their exposure to declines in the value of the dollar. 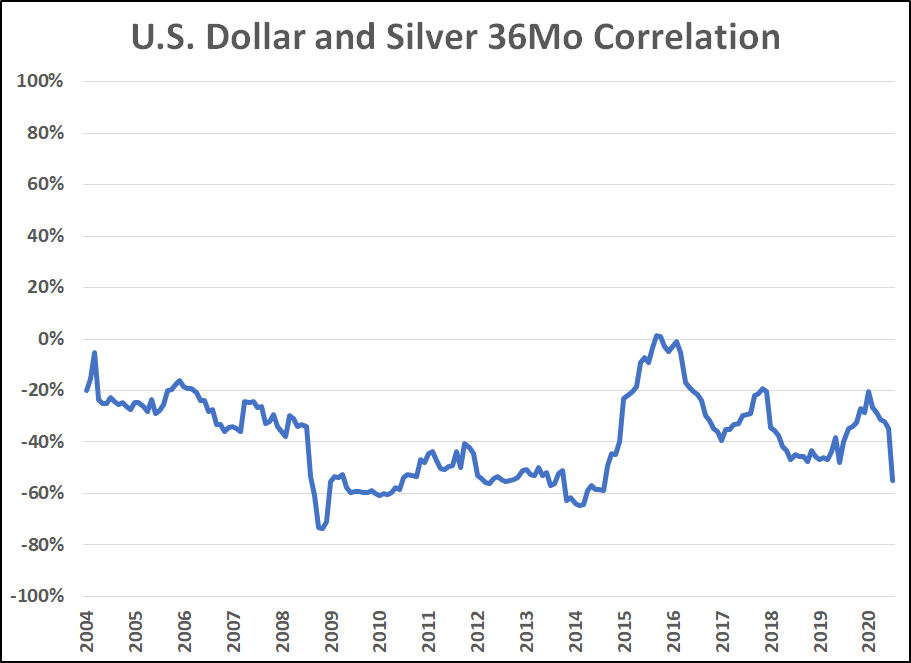 Over the long-term, precious metals like gold and silver have not had a tight relationship to inflation.   Over extremely long time periods, they have been a good store of value, but over monthly or annual intervals, the relationship is indeterminate.  Perhaps some of the uncertainty in the relationship has to do with the varying causes of inflation.  For example, the Arab oil embargo was an inflation shock that did not much affect the price of precious metals.  The inflationary impact of various legal, regulatory and cultural barriers to the free flow of goods, services, and labor have slow but powerful long-term inflationary effects, but their effect on the price of precious metals may vary greatly.   In sum, precious metals are not a very good way to hedge against increases in the CPI.

On the other hand, if inflation is caused by too-rapid expansion of the money supply, then precious metals may be an attractive way to protect against that source of long-term inflation.  And that is exactly the situation we face at present.  In the wake of the Great Recession, the Fed not only lowered short-term interest rates to zero, but began a policy of “quantitative easing,” which was designed to drive down longer-term interest rates. They had not had a chance to normalize their monetary expansion when the novel coronavirus hit.  Their response has been essentially a doubling-down of the monetary expansion.   Inflation in goods and services has been tame because of government shutdown of the economy, but inflation was quick to arise in the prices of financial assets, particularly stocks and bonds.  It is reasonable to assume that this enormous monetary expansion will ultimately affect the prices of goods and services in the years ahead.  Silver may well prove a good hedge against this risk.

Because silver has rallied so strongly in the past few months, it is reasonable to be concerned about whether it has become overvalued. However, as shown in the graph below, silver is still quite a bit below its recent peak in 2011.  Using inflation-adjusted prices, it is also dramatically lower than its all-time high in 1980. 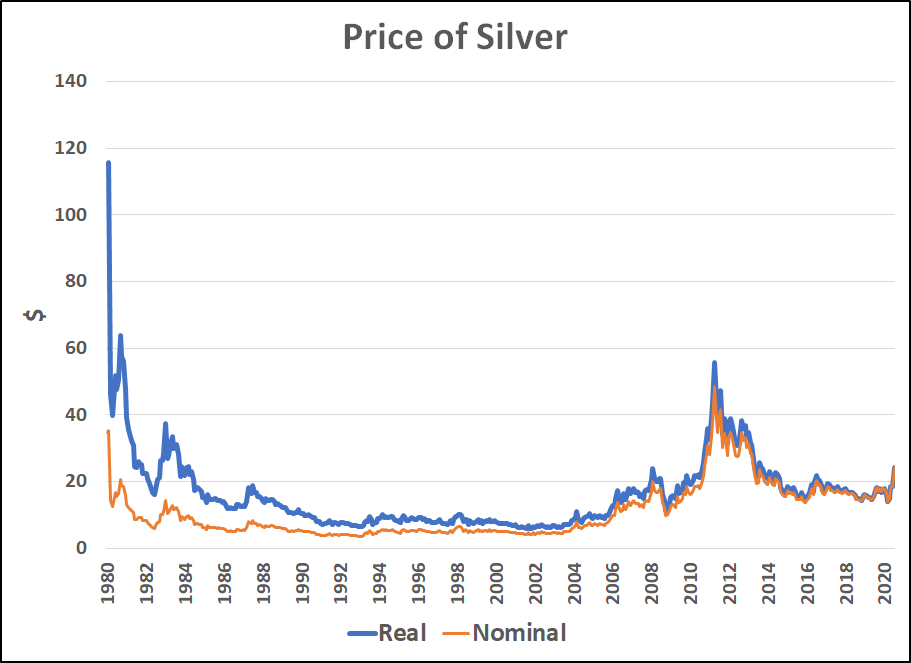 The price of silver is often benchmarked against the price of gold. As shown in the graph below, silver is cheaper than usual relative to gold, another indication that is it not currently overpriced. 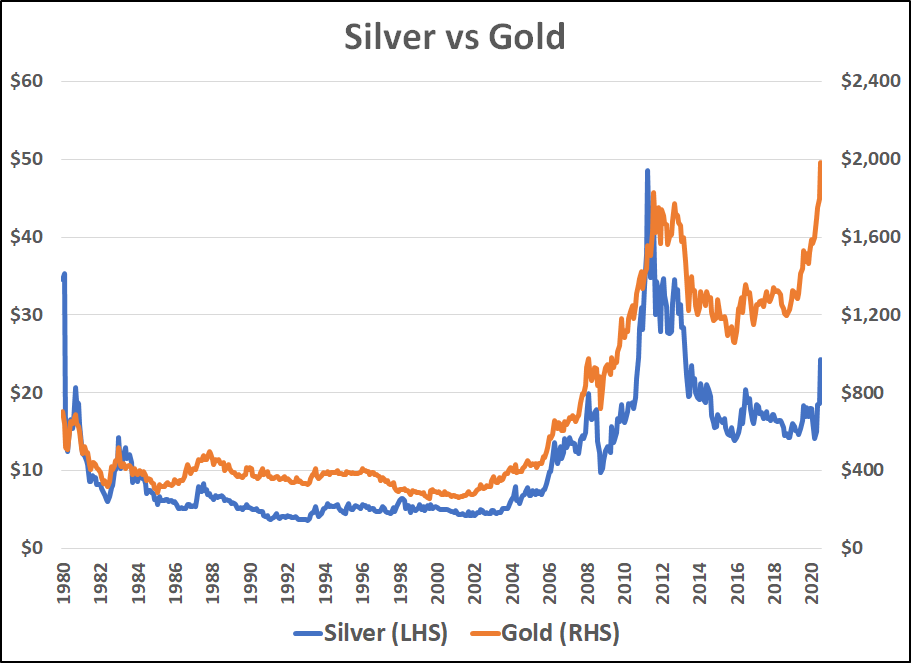 Investors already seem to be attuned to the potential benefits of silver in the current economic and policy environment. Cumulative returns for the four assets we have discussed are shown in the graph below: 1) S&P 500, 2) gold, 3) silver, and 4) the U.S. Dollar. The time period is December 31, 2007 through July 31, 2020. The dips in the S&P 500 and in silver toward the end of the period coincide with the inception of the Covid-19 pandemic. On the other hand, gold and the dollar powered through the Covid-19 meltdown. In the past few months, the dollar has begun to weaken, while both gold and silver have rallied strongly. 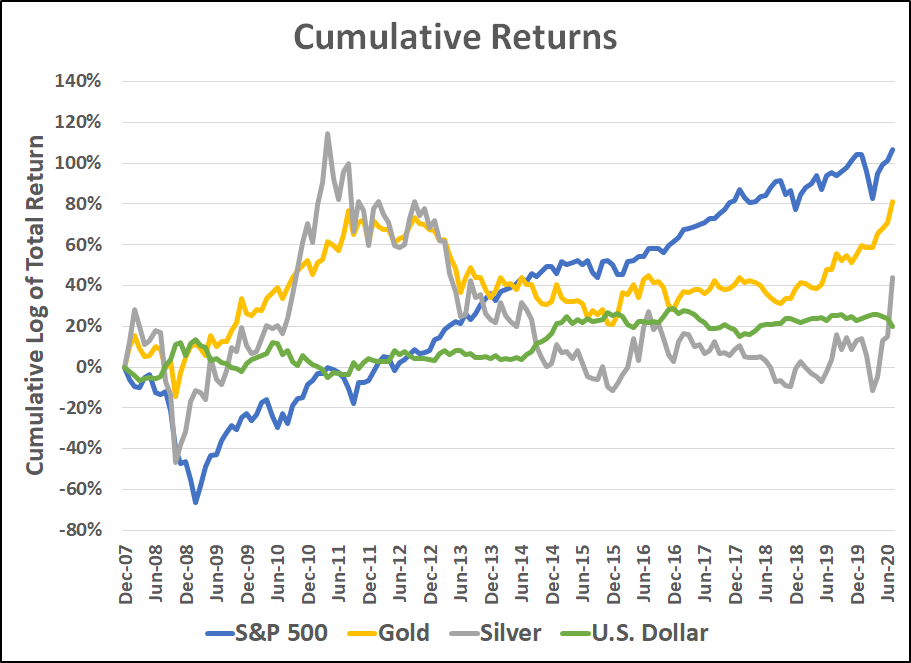 Research has found that all assets—stocks, bonds, currencies, and commodities—in the U.S. and around the world—exhibit return momentum. That is, positive returns lead to more positive returns, and vice-versa. My own research confirms the fact that there is momentum in asset returns, including among commodity ETFs. The graph below is a “factor graph.” It depicts the cumulative return to a one standard deviation positive exposure to commodities with higher 12-month exponentially-weighted returns. Over the time period since 2012, those commodity ETFs with higher trailing returns were able to achieve superior returns in the following month fairly consistently. 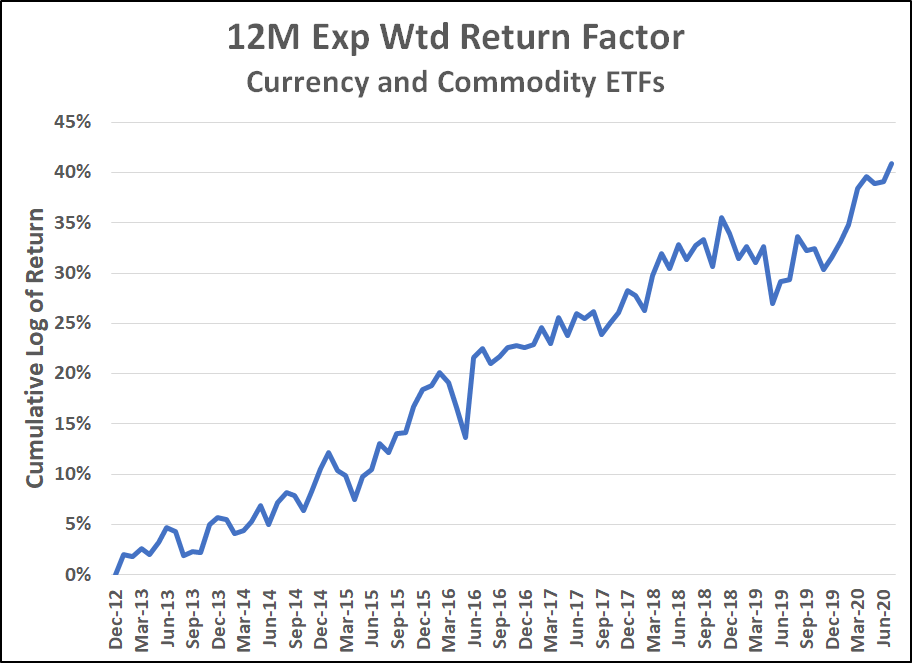 As of July 31, 2020, among the 23 commodities that are the basis for a myriad of single- and multiple-commodity ETFs, silver had the highest exponentially-weighted 12-month trailing return, as shown in the graph below. Based upon how commodities with superior trailing returns have behaved in the past (as shown above), this is a strong indicator that excess return for silver lies ahead in the near-term. 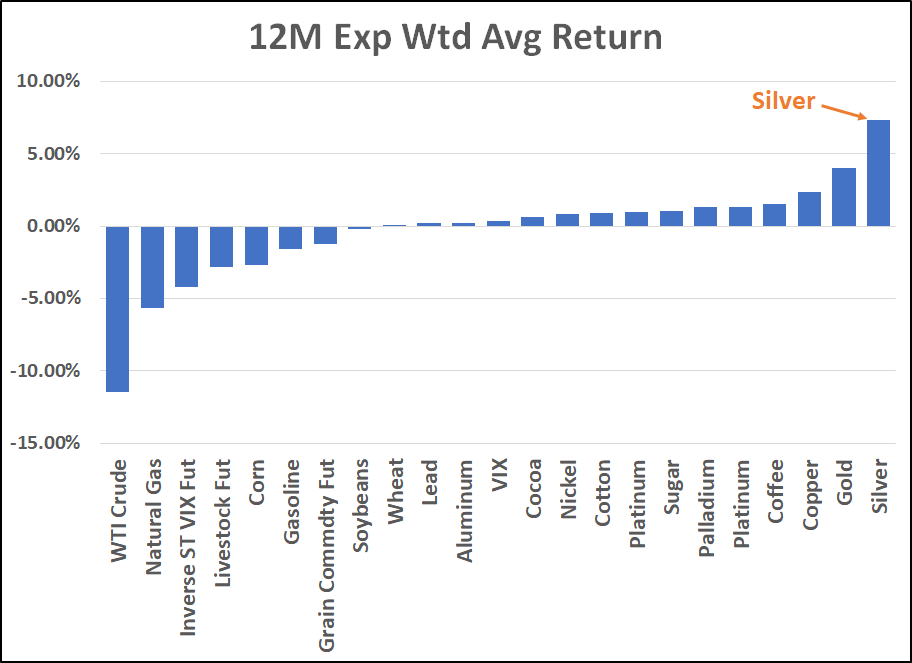 The table below lists the silver funds that interest me. I do not invest in open-end mutual funds or individual stocks. My focus is ETFs, ETNs, and closed-end funds. The two most common ways to invest in silver through funds are 1) physical silver funds and 2) silver mining stock funds.  Physical silver funds (and their close cousin, silver futures funds) are a direct play on the price of silver.  Therefore, the silver R-squared and silver beta for most of these funds is roughly 100%.  The major silver mining stocks fund, Global X Silver Miners ETF (SIL), also has a silver beta close to 100%, but its silver r-squared is only 70%. The junior silver mining fund, ETFMG Prime Junior Silver Miners (SILJ), has a somewhat higher silver beta, and a somewhat lower silver r-squared. Also, its sensitivity to the S&P 500 is somewhat higher. However, all of the silver funds have a fairly low S&P 500 r-squared, indicating that they do a good job of diversifying market risk. (Most broadly diversified U.S. stock funds have an S&P 500 r-squared of over 90%.)

For the sake of completeness, I included in the table a number of funds that I consider too expensive (high expense ratio), too illiquid (high bid-ask % spread), and/or too likely to be closed (tiny AUM) to invest in at present. Consequently, I will only comment on those funds that have a reasonably low expense ratio, a reasonably low bid-ask % spread, and high enough AUM to make them unlikely to be closed.

There are two large and liquid physical silver ETFs:  1) iShares Silver Trust (SLV) and 2) Aberdeen Standard Physical Silver Shares ETF (SIVR). From a risk and return standpoint, there is no difference between them.  The differences are structural, related to the terms of the funds.  SLV is the largest in terms of AUM ($14 Bil).  It has significantly higher trading volume, which results in a tight bid-ask spread of .05%. If you are a frequent trader, SLV is likely to be an attractive choice.  However, its expense ratio is on the high side at .50%. SIVR is also reasonably large ($774 Mil), has a lower expense ratio of .30%, but has a higher bid-ask spread of .17%. Consequently, SIVR may be preferable for longer-term holders.

Both of these physical silver ETFs are legally structured as a grantor trusts. As such, owners of SLV and SIVR are taxed as if they held silver directly, which means that the investment is considered a “collectible” by the IRS.  Even if held for more than a year, any gains are taxed at the lessor of the taxpayer’s ordinary income tax rate or 28%. Thus, these investments are not able to take advantage of the preferential capital gains tax rates normally applied to long-term capital gains, which are typically taxed at a 15% rate for most taxpayers.

The other physical silver funds listed in the table have other structures that provide possible work-arounds from a tax standpoint.  However, I consider them unattractive because of the combination of high expense ratios, high bid-ask % spreads, and tiny AUMs.

One interesting fund that has the potential for more attractive tax treatment is Sprott Physical Silver Trust (PSLV), a very large ($2.3 billion) and liquid closed-end fund that invests in physical silver. It has an expense ratio of .45% and a bid-ask spread of .13%. This Canadian trust trades on the NYSE, making it very convenient for U.S. residents to buy.  It is a “Passive Foreign Investment Company (PFIC),” and as such, has different tax regulations.  In short, it is possible for PSLV to be taxed like a U.S. stock, with the same preferential rate on long-term gain/losses. However, in order to take advantage of this the taxpayer must fill out IRS Form 8621 each year. This is unfamiliar to nearly all taxpayers, as well as most of their accountants. The form reports to the IRS purchase dates and number of shares held at year-end. It must be filed annually to retain the qualification. Since most clients are put off by even a form as common as the K-1, they are likely to revolt at having to file (or pay their accounts to learn about and file) Form 8621 each year. However, the difference in long-term tax rate is the difference between 28% and 15% in most cases. Saving 13% in taxes may be worth some trouble.

The table below also lists three silver mining stock funds:  1) Global X Silver Miners ETF (SIL), 2) ETFMG Prime Junior Silver Miners ETF (SILJ), and 3) iShares MSCI Global Silver Miners ETF (SLVP). The correlations among all three are over 95%, so they are highly similar. That being the case, I see no reason not to focus on the largest, cheapest, and most liquid of the three:  SIL.  I find no compelling reason to even consider the other two.