Many investors are surprised to learn just how much tax they will owe during their retirement years.  Roth conversions can help reduce the tax bills.

Most retirees expect the bulk of their retirement income to come from retirement savings accumulated in various tax-deferred accounts, such as IRAs and 401ks.  Any withdrawals from these accounts (unless they are Roth versions) will be subject to income tax at ordinary income rates, which are currently much higher than rates on long-term capital gains or qualified dividends.  You received a tax break when you put the money into the account because that money was not counted in your income at the time.  In exchange, you will have to pay ordinary income taxes not only on the amount originally contributed, but also on the increase in value from investment returns (and inflation) accumulated over the years. Ouch!

If you are thinking that you can avoid the income taxes by not withdrawing any money, sorry, but the IRS requires you to withdraw a certain percentage of your account, called a required minimum distribution (RMD), each year, starting at age 72.  (The age used to be 70 ½, but the age was pushed back to 72 under the Secure Act for anyone born after July 1, 1949.)

Ideally, what you would like to do is avoid having RMDs that are so large that they put you into a higher tax bracket than you would otherwise be in. Later, we’ll discuss strategies for lowering the tax burden for RMDs, but the first task is to figure out what the tax burden will be.

It’s a fairly straightforward exercise to project your RMDs out into the future.  The IRS publishes the “Uniform Lifetime Table” which tells you the percentage of your annual required minimum distributions (RMDs) based upon your age.   (This table is updated once in a while, but not very often.) Your retirement savings will grow over time, of course, depending upon how it is invested, so you’ll want to factor in a rate of return.  This should be a real (inflation-adjusted) rate of return because income tax brackets are inflation-adjusted, and our objective is to figure out the extent to which your compounding investment returns may push you into a higher tax bracket.

What is a reasonable real rate of return?  On the low end, a portfolio that is 100% invested in bonds such as in the Vanguard Total Bond Market ETF (BND) has an expected return equal to the yield, which is currently only about 1.5%.  For bonds and bond funds, current yield = expected return.  On the high end, a portfolio that is 100% in stocks has historically (since 1926) returned about 10.2% before adjusting for inflation.  After inflation, the return has been about 7.1%.  However, that is not a realistic rate of return to assume going forward, since price/earnings ratios have inflated so much since 1926. A more realistic bottom-up forecast would add the current dividend yield of 1.4% to a long-term dividend growth rate, which since 1990 has been about 6.6%.  (I'm using the median, which is a bit above the average of 6.0%, to account for stock buybacks, which have increasingly substituted for dividends but are merely another way of returning cash to shareholders.)  This would result in a total expected nominal return for stocks of about 8.0%.

A simple 60/40 combination of the 1.5% bond return and the 8.0% stock return would net an expected nominal return of 5.4%.  To get the real (inflation-adjusted) expected return  you would have to subtract expected long-term inflation.  One market-based measure of inflationary expectations is the yield spread between the 10-Year Treasury Bond and the 10-Year TIPS (Treasury Inflation Protected Securities) Bond.  The 10-Year Breakeven Rate (Treasury-TIPS) is currently  2.5%.  Thus, the long-term real return on a 60/40 stocks/bonds portfolio would be about 2.9%. (5.4% - 2.5% = 2.9%.)

RMDs are unlikely to be your only source of income during your retirement years.  The other major source of income for most people will be their Social Security benefits.  If you were a high earner during your working years, it is likely that your monthly benefit will approach the maximum benefit allowed.  If you are reasonably healthy, it is likely to be wise to wait to start claiming benefits until age 70.  In 2021, the maximum Social Security benefit at age 70 is $3,895 per month or $46,740 per year.  (If you are married to someone who was also a high earner, you could possibly double that income to $93,470 per year.)  If your "combined gross income from all sources" (including Social Security, earned income, interest, dividends, and RMDs) is more than $34,000 (or $44,000 for a married couple), 85% of your Social Security income will be included in your taxable income.

The graph below illustrates the projected RMDs for a traditional 60/40 IRA account of $3 million for someone at age 60 and a 2.9% real return.  By age 72, the IRA would have grown to a constant-dollar (inflation-adjusted) value of $4.23 million. The first RMD (at age 72) is about 4% of the portfolio value and it goes up from there. At age 90, the RMD rate is 8.8%. The RMDs, along with Social Security benefits, push the inflation-adjusted value of the taxable income up close about $269,000 per year by age 90. 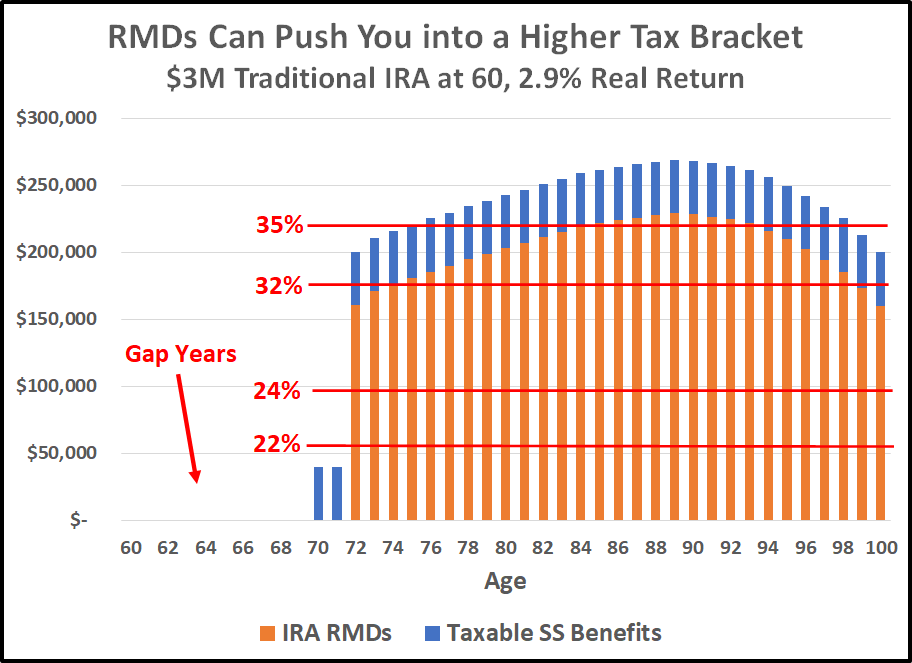 One excellent strategy for reducing the tax burden of RMDs is to smooth out the income from an IRA by converting some of the money from traditional to Roth IRA during the “gap years” between retirement (here assumed at age 60) and the start of RMDs at age 72 or the start of Social Security benefits (ideally at age 70). Any money that is distributed out of a traditional IRA, even if it is then contributed to a Roth IRA, becomes income that is taxed at ordinary rates, just like earned income. However, once money is "converted" from a traditional IRA to a Roth IRA, it is never taxed again. That is a tremendous benefit that is widely underappreciated.

An optimal approach to Roth conversions is often bracketed between two alternative strategies, which we will call the “fill up the tax bracket” approach and the “equal increments” approach.  The fill up the tax brackets strategy seeks to “fill up” the 24% tax bracket (in this case--it could be another tax bracket in another case) with yearly Roth conversions during those years in which taxable income is below the maximum income that is taxed at the 24% rate. For married taxpayers filing jointly, in 2021 that figure would be $329,850 plus the MFJ standard deduction of $25,100, or $354,950. For most retired couples, that would provide plenty of room for large Roth conversions that are taxed at or below the 24% rate.

By the way, if you think you have a good handle on your taxable income for the year, you will want to do your Roth conversion toward the early part of the year, which will give you longer to accumulate investment returns tax-free and also maximize the delay in paying the taxes on the converted amount, which will be April 15 of the following year.

By the way, it's not always optimal to convert 100% of your traditional IRA into Roth.  There are a number of variables to take into account, including your current and expected future marginal tax rates, the size of your IRA, the returns you expect in your IRA, whether you will spend or re-invest IRA distributions, and your life expectancy.  It's a very complicated set of calculations.  Unfortunately, many advisors do not have very good software to help with this (if they have any software at all).  Fortunately, I have the best software available:  Right Capital.  When it comes to proactive tax planning with Roth conversions, "RightCapital has been the only full-scale financial planning program in recent years to offer such in-depth capability" according to Michael Kitces, a well-recognized authority on financial planning.

That said, even if you do not necessarily expect your RMDs to push you into a higher tax bracket, there may still be one good reasons to consider some amount of Roth conversions:  tax rates are likely to increase in the years ahead.

Perhaps the most compelling reason to go ahead and pay taxes early to get money out of a traditional IRA and into a Roth IRA may be the likelihood that tax rates will go up in the future.  The RATE that you pay on your IRA distributions, whether now or in the future, is what really matters.

This may come as a surprise.  Most of us instinctively avoid paying sooner when we could pay later.   However, the ending value of your portfolio will not be affected by when you pay the tax if the rate is the same, assuming that once you pay you are able to avoid paying any more taxes after that. (Such as would be the case with a Roth conversion.)

This mathematical fact is based upon the commutative property of multiplication.  You probably learned about it in elementary school and have long since forgotten.  If “T” stands for the rate of taxation, and A, B and C stand for annual rates of return, then it doesn’t matter where you insert T into the chain of multiplication, the product will be the same.  That is:

So, if your current marginal tax rate is 24% and you are SURE that it will be 24% in the future, then there is no benefit in paying early to convert to a Roth, but neither is there any penalty. However, if you have reason to believe that your marginal tax rate will be higher in the future, either because your income is higher or because tax rates have gone up, you are better off paying NOW at the lower rate to avoid paying the higher rate in the future.

What are the chances that tax rates will go up?  Given the current political environment, especially with the level of federal, state, and local spending, the odds seem to favor higher rates in the future.  Federal tax rates went down with the Tax Cuts and Jobs Act of 2017, but those cuts are already set to expire in 2025. Democrats now control the White House and both branches of Congress. Most Democrats favor repealing the tax cuts sooner than 2025. And many of them favor setting rates higher than they were before. A lot higher. Many of them also favor eliminating preferential rates for long-term capital gains and corporate dividends.

There may never be a better time to convert IRA money from traditional to Roth. The floodgates of government spending have been opened wider than ever. Government intervention in the economy has never been higher. The public mindset seems to have shifted in favor of socialism and against capitalism. Change is in the air.  Anything can happen, but the momentum seems to be building towards a bigger role for government. Higher taxes will be needed to pay for it.