“Inflation is always and everywhere a monetary phenomenon in the sense that it is and can be produced only by a more rapid increase in the quantity of money than in output.”

Why Inflation Caught Us By Surprise

Neo-Keynesian economic philosophy dominates the current economics profession. I believe it is true that all of the members of the Federal Reserve Open Market Committee (those who vote on monetary policy), all of the senior economic advisors within the Biden administration, and all of the senior economic staff in the Democrat-controlled House and Senate are Keynesians. As such, they all believe that government should play a very active roll through both fiscal and monetary policy to ensure full employment, and that absent government intervention, the economy may not have sufficient “demand.” That is, the government sector must spend money freely because the business and consumer sectors of the economy cannot be relied upon to spend freely enough to keep the economy running at capacity.

Economic philosophies not aligned with neo-Keynesians are more fragmented, but they tend to be united by a skepticism of government intervention in the economy. One alternative viewpoint, often dubbed “supply-side economics,” emphasizes the fact that the economy must be able to efficiently produce the goods and services demanded in order for the economy to growth at a healthy clip and avoid inflation. Accordingly, the more frictions applied to the supply side (taxes, regulations, litigation), the lower the inflation-free capacity and the slower the economic growth rate.

Supply-side economics became well-known in the 1980’s and is often associated with Ronald Reagan. However, its earliest roots date back to the 19th century and the Austrian school of economics. Another allied school of thought is sometimes called “Monetarism,” and is usually associated with Milton Friedman.   It is important to note that although he believed that changes in the money supply were powerful tools, his opinion was that central bankers should maintain a steady rate of growth in the money supply and avoid attempts to actively use it to fine-tune policy the way that Keynesians do.

I was reminded of the relationship between CPI and M2 in an article in The Wall Street Journal on July 25 by Donald Luskin, “Why Inflation Is on the Way Down.”  Luskin shows a graph similar to the one below illustrating the fact that, with a 15-month lag (Luskin uses 13 months), the growth in M2 would go a long way to explain the sudden jump in inflation that we have seen over the past year.

Luskin explains that M2 was dramatically boosted by the huge stimulus measures taken by Congress in the wake of Covid: about $6 trillion in “various income-support programs for households and businesses, including three rounds of stimulus payments, extended and enhanced unemployment benefits, refundable child credits through the tax code, and forgivable Paycheck Protection Program loans.”  All of these measures injected money into the U.S. economy. 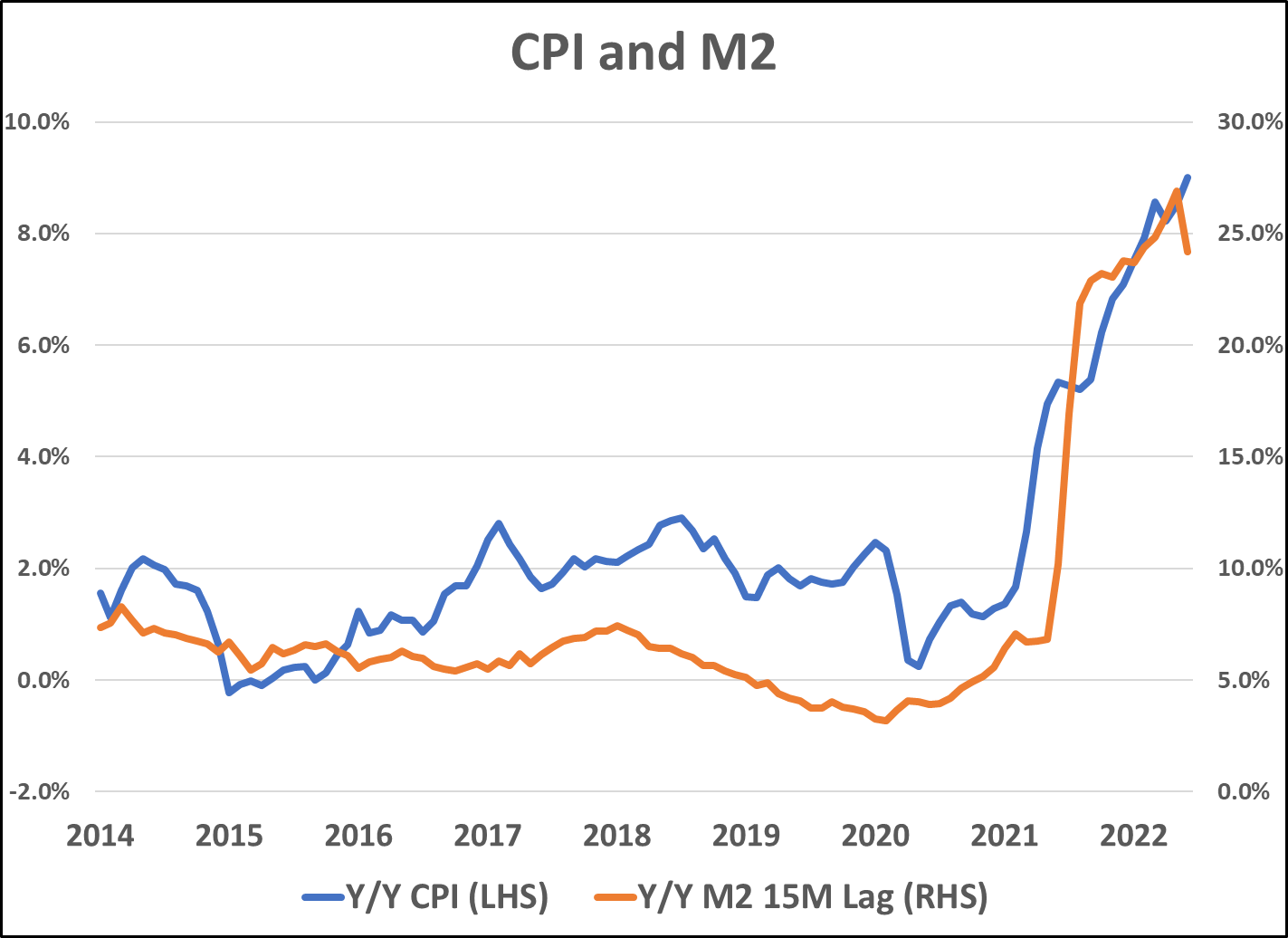 In Luskin’s view, since many of these spending measures are behind us, inflation will naturally fall along with M2 in the months ahead. I am not as optimistic. Once passed, spending measures have a history of hanging around. As Joe Biden famously said when he was running for President, “Milton Friedman isn’t running the show anymore.” Indeed. Of the three Covid stimulus packages passed by Congress, The American Rescue Act of February 2021 signed by Biden was both the largest and the least necessary. Since then, more spending measures have been passed, including a $1 trillion infrastructure law signed in November 2021. Then came a $1.5 trillion omnibus spending bill in March 2022. Most recently, Congress passed a $280 billion bill to subsidize the U.S. semiconductor industry. Just today came news that heretofore deficit stalwart Joe Manchin has agreed with spendthrift Chuck Schumer on a $433 billion bill that is largely about green energy. Covid-related enhanced subsidies for both Medicaid and Obamacare plans are due to expire at the end of 2022, but I expect there will be another “emergency” extension. Growth in Supplemental Nutritional Assistance Programs (SNAP fka food stamps), greatly expanded under Obama, now includes over 41 million Americans. While losses mount on student loans, and repayment is already tied to income and type of employment, Biden may just go ahead and forgive the loans altogether. Politicians from both parties love to spend taxpayer money, which increases the overall money supply.

The problem is twofold.   First, if the rate of government spending is much above the rate of real economic growth, it is inflationary, as Friedman pointed out.  Second, if the spending takes money away from more efficient uses of capital and reallocates it to less efficient uses, the productivity of the economy (its ability to produce wanted goods and services) will decline, which is also inflationary.

There are other reasons to be less than optimistic about how fast and how far inflation will fall in the months ahead. The methodology used to calculate housing costs has the effect of smoothing and delaying the impact of higher home prices on the CPI Index, and home prices have increased dramatically since Covid. This effect is already baked in and will become evident over the next several months. The ongoing invasion of Ukraine by Russia continues to disrupt supplies of food and energy around the world, which is likely to keep contributing to U.S. inflation. China’s zero-tolerance Covid policy means that supply snags out of that country are likely to recur for quite some time. Global trade itself, which has been one of the most important efficiency-boosting and inflation-taming factors over the past few decades, has waned in political popularity. Protectionism, which helped spark the Great Depression, has returned.

Keynesians all, officials at the Fed are focused on reducing demand in the economy by raising interest rates. There is an implicit belief that inflation and unemployment are involved in a tradeoff—the “Phillips Curve.”  Although largely disproven empirically, particularly by the stagflation of the 1970s, as Keynes himself observed, many people are in fact “the slaves of some defunct economist.”

It seems that no one in government is trying to ease the frictions that beset the supply side of the economy—the actual production of goods and services. Taxes, which the dampen the incentive to work, save, and invest, are piled on rather than reduced. Burdensome regulations apply a slow but steady strangulation to the economy, particularly small business. To the extent that they are actually implemented, the costs of following governmental climate change targets would equate to several world wars, with little actual effect on global climate to show for it. Meanwhile, government seems to be doing everything in its power to discourage domestic oil and gas production, despite the obvious inflationary effects of such a policy.

If I am right in my assertion that inflation will be higher and more long-lasting than the current market consensus expects, then it would be prudent to include some inflation-hedging investments in one’s portfolio. I wrote an earlier article on this subject, “Investing to Hedge Inflation Risk.”  I stand by my investment recommendations in that article. The best inflation-hedging investments include TIPS (particularly short-term TIPS), commodities, and commodity-related equities, such as natural resources, basic materials, and energy stocks. I often include an allocation of as much as 30% of client portfolios to such investments.