Many ETFs offer “liquid alternatives” of various kinds, but very few have provided meaningful returns that are uncorrelated with the stock market, which is the whole point of investing in alternatives.  IQ Merger Arbitrage Index ETF (MNA) is an exception.  MNA offers investors a relatively low-cost passively-managed fund that systematically harvests the merger arbitrage risk premium.  The fund has had a low correlation with the S&P 500, low volatility, and an impressive return history. It was just named  “Alternative ETF of the Year” at the 2019 Mutual Fund and ETF Industry Awards.

Why Alternatives Are Worth Considering

The risk of most portfolios is dominated by stock market risk.  Most investors seek to diversify that risk to lower the volatility of their returns and reduce the risk of long-term capital impairment.  Traditionally, bonds have played that role.  However, in recent years, bond yields have been so low that the prospective return from bonds has been unattractive.  Alternative investments may be a substitute for bonds in the role of diversifying stock market risk in a portfolio.

Why Liquid Alternatives Are Worth Considering

Why Merger Arbitrage Is Worth Considering

Liquid alternatives include many different types of investment strategies.  My research indicates that very few provide “alpha” or risk-adjusted return.  I have found only one alternative strategy that has provided consistent alpha:  merger arbitrage.  The reason probably has to do with the fact that the returns for merger arbitrage have less to do with manager skill than say publicly traded private equity, real estate, market neutral, global macro, or distressed debt.  Merger arbitrage gets its returns by harvesting a specific risk premium, “deal risk.”  Although the specific merger deals that a fund participates in may differ, the core risk premium shared by all tends to result in a relatively correlated return among them.  Importantly, the deal risk premium has a very low correlation with stock market return, providing an attractive diversification benefit.

The basic process for pure merger arbitrage is relatively simple.  After a merger is announced, the arbitrageur buys the stock of the target company. If the buyer is paying cash, there is a somewhat greater risk if the stock of the target company falls (along with the industry, sector, or overall stock market), so that risk may be mitigated by shorting the industry, sector, or market.  If the buyer is paying with its own stock, that stock is usually shorted. The price of the target company stock starts out below the announced takeover price and moves up to that price over time if the deal goes through, providing a modest but attractive return since it is generally harvested within a fairly short time period.  However, if the deal falls through, the target company’s stock will usually fall precipitously, wiping out the potential merger arbitrage profit many times over.  The return profile is very negatively skewed.  This type of return profile generally earns a high rate of return because it is so unattractive to most investors.

Why MNA Is Worth Considering

IQ Merger Arbitrage Index ETF (MNA) offers investors a relatively low-cost passively-managed fund that systematically harvests the merger arbitrage risk premium.  With an expense ration of .78%, it is less expensive that other merger arb funds, most of them actively managed.  This ETF tracks a proprietary index called the IQ Merger Arbitrage Index.  It buys global companies for which there has been a public announcement of a takeover by an acquirer.  A proprietary algorithm estimates the probability of a successful deal based upon the target’s stock price right before and right after and deal is announced as well as its recent stock price.  Stocks are weighted based upon 7-day median dollar volume, with a maximum of 10% in any one security.  As of 12/31/2018, the fund had 46 holdings, with 71.50% in the U.S., and 38.22% in technology.  The fund does not short acquirers, but rather employs a “partial hedge” of global stock risks of various U.S. sectors and international countries and regions.

To facilitate performance comparisons, I will focus on the same time period for all three funds.  The most recently launched was MNA, with an inception date of 11/17/2009.  My objective is to measure the risk-adjusted return (“alpha”) for each fund.  To do that requires a risk model.   At Sapient Investments, we measure the sensitivity of a fund’s returns to four risk factors simultaneously (using multiple regression analysis) that capture much of the risk common to most assets:

The graphs below all start on 11/30/2012, about three years after the inception of MNA.  The reason is that our risk model requires three years of performance history to estimate risk factor sensitivities.  As shown below, even though the three funds all primarily invest in stocks, the hedged nature of their investments gives them modest net MKT betas, as shown below, but with significant differences among them: 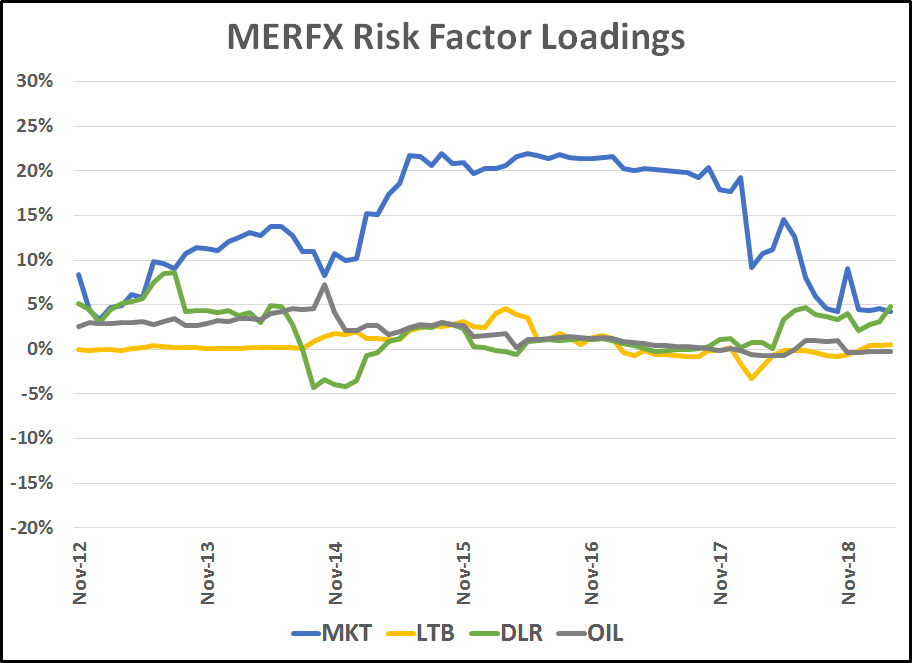 The Merger Fund (MERFX) had a net stock market exposure as high as 22% a few years ago, but more recently it has been only about 5%.   Other risk factor exposures are not very significant. 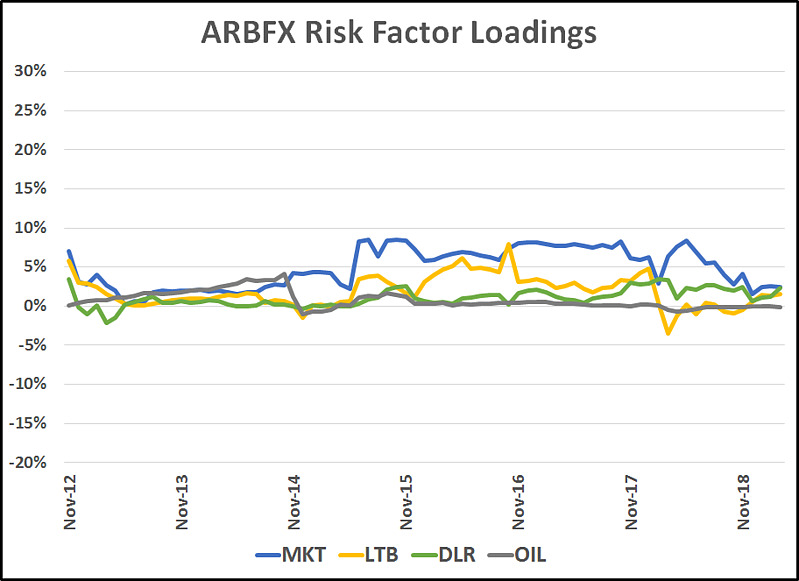 The Arbitrage Fund (ARBFX) is extremely risk-controlled, with a consistently low net MKT beta.  The three other risk factors are even more tightly controlled. 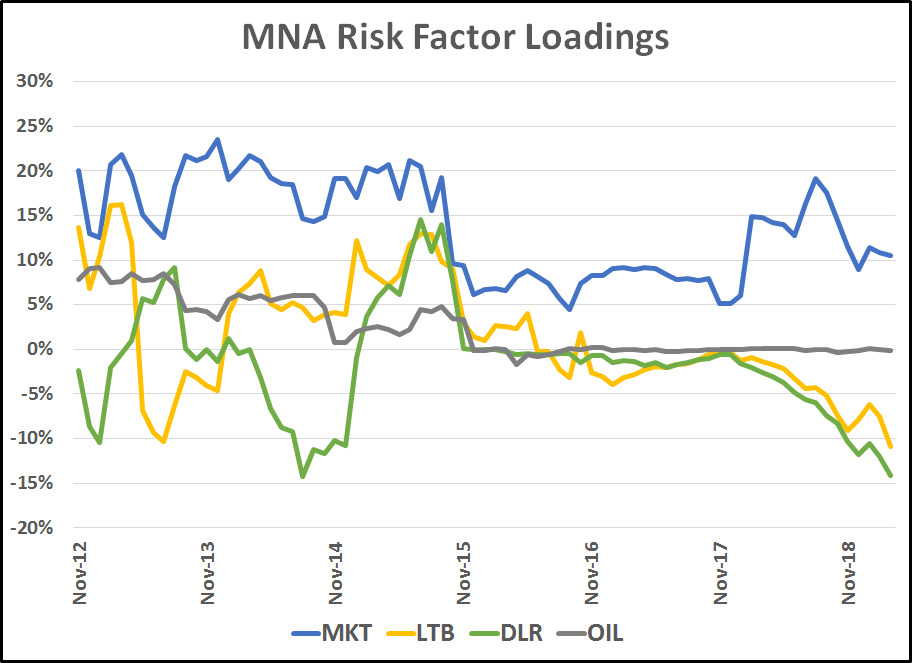 IQ Merger Arbitrage Index ETF (MNA) had higher net MKT betas a few years ago, but now it is about 10%.  The global nature of its portfolio shows through in the negative exposure to the DLR risk factor.  The negative sensitivity to the 10-Year Treasury (LTB) stems from the interest rate risk embedded in the mix of industry exposures and hedges.

Having estimated the risk factor sensitivities of the funds, we can now separate their historical returns into the returns attributable to the four risk factors, with the remaining “residual return” as return due to other factors, presumably dominated by the deal risk premium shared by all three funds.  While I do not show exhibits to prove it here, it is a fact that the vast majority of funds do not exhibit a consistently positive residual return.  The merger arb funds are exceptional. 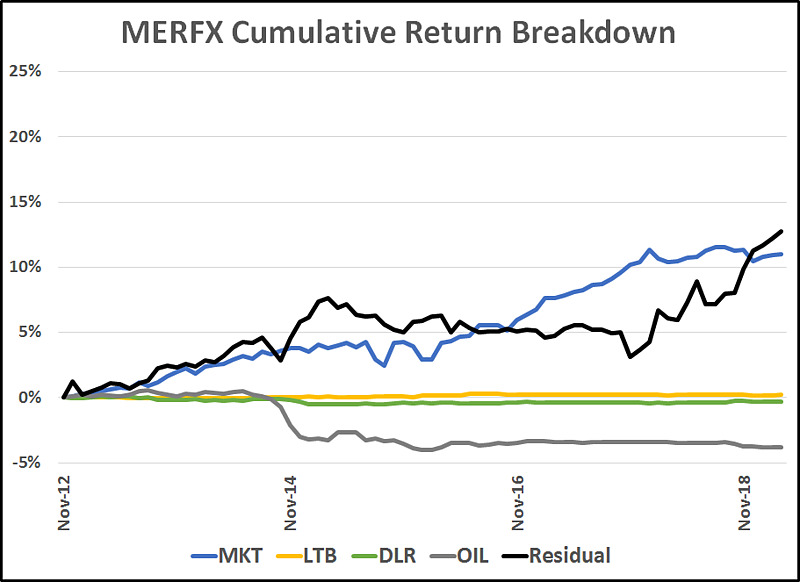 The graph above is a disaggregation of the cumulative return of MERFX since the common start date of 11/30/2012.  Given the positive exposure of MERFX to MKT risk, and the strong stock market return during this period, it is not surprising that much of the return was attributable to MERFX’s MKT beta.  The more important line is the black one:  residual return.  Over the 6 1/3 years studied, the cumulative return was about 13%, which equates to about 2% per year.   While have any alpha at all is noteworthy, 2% may not be enough to get many investors excited. 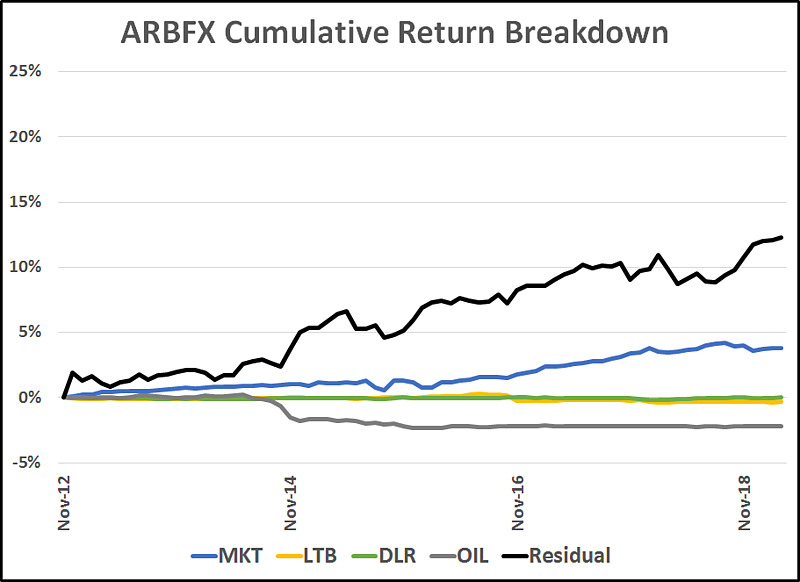 ARBFX is more tightly risk-controlled, with a much lower level of MKT risk.  Consequently, very little of the cumulative return was risk-related.  Also, its residual return was much more consistent.  Still, as was the case with MERFX, the level of residual return—again about 2% per year—may not get the attention of investors, even though perhaps it should.   True alpha is exceedingly rare and valuable in its diversification effects. 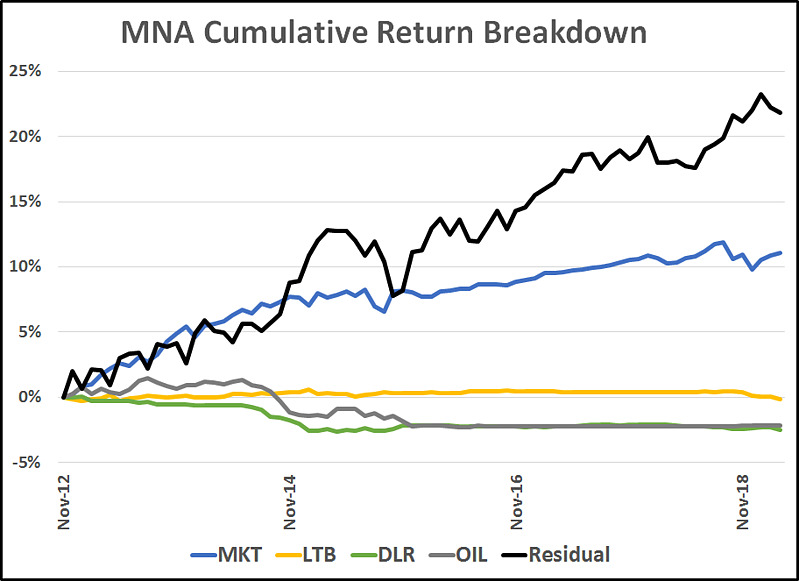 Over the same 6 1/3-year time period, MNA was able to garner a cumulative residual return of about 22%, or 3.5% per year.  And it was quite consistent.  How was MNA able to beat out its two well-established competitors?

Lower expenses is part of the answer.  MNA is passively managed. There is no attempt to pick the most attractive deals beyond what is embedded in the logic underlying the reference index.  Therefore, fewer analysts and portfolio managers are required, lowering the overhead.   This savings is passed along to the investor in a lower management fee of .75%.  After acquired fund fees of .03%—short-term cash is invested in a couple of ETFs—the total expense ratio is only .78%.  MERFX and ARBFX had expense ratios of 1.91% and 1.94% respectively.  That’s a difference of over 1% per year right there.

Some of that difference has to do with a different methodology for hedging.  The mutual funds short the stocks of acquiring companies.  MNA doesn’t.  Instead, it shorts sectors and international countries and regions through total return swaps on ETFs.  Not only are there no dividend payments that must be included in the expense ratio calculation, ETF swaps are also much less expensive than shorting individual stocks.  In fact, on a majority of these swaps, MNA is actually paid by the counterparty, Morgan Stanley.

Arguably, MNA is not doing as exact a job of hedging deal risk by not shorting the stock of the acquirer in a stock (as opposed to a cash) merger.  Obviously, their analysis indicates that hedging aggregate risks through ETFs is enough to mitigate most of the risk.  And it certainly is cheaper.

The remaining difference in residual return of less than .5% could be due to random luck in owning the right deals.  Or perhaps there is some value in the deal selection logic embedded in the index construction rules.  Regardless, the majority of the extra residual return is attributable to MNA’s lower operating and hedging costs, an advantage that is long-term in nature.

One more important distinction for those who might contemplate owning MNA in a taxable account.  Merger arbitrage is an extremely high turnover strategy.  That means it tends to generate quite a lot of short-term capital gains.  These are generally passed along to investors at the end of the year in their 1099s.  However, because it is an ETF, MNA has a structural advantage over mutual funds that helps it to minimize capital gain distributions.  In fact, MNA has not had a distribution since 2016, and even then, it was a distribution of only $.06 against a fund share price of $29.30, or just .21%.

When to Invest in MNA

Own it when Treasury yields are low.  MNA can be viewed as a substitute equity risk diversifier for Treasuries, which tend to have a negative MKT beta and really shine when the stock market falls. If you expect a market decline, nothing beats Treasuries and that should be where you put your money.  Regardless of your market outlook, the yield on Treasuries represents the opportunity cost of using MNA as a substitute hedge.   At present, the 10-Year Treasury yield is 2.6%.  The average MNA residual return of 3.5% is higher, though not as safe.  And because MNA does not have the negative MKT beta of Treasuries, it is not as powerful a diversifier.  Consequently, it must have a reasonable return spread to Treasuries before it can be considered attractive.  A spread of .9% may be enough, perhaps.

Own it when short-term rates increase.  There seems to be a positive relationship between short-term interest rates and the return from merger arbitrage. Using the returns of the HFRI ED Merger Arbitrage Index and Credit Suisse Event-Driven, Risk-Arbitrage Index since 1994 to gauge merger arbitrage returns, Index IQ, the sponsor of MNA, found that merger arbitrage returns had a positive and significant relationship to both the beginning level of the risk-free rate and upward movement in the risk-free rate.  (For details, see Index IQ’s website blog post “Merger Arbitrage:  An Antidote to Rising Rates?”.)  Our own research on the residual return of MNA indicates a significant relationship only with changes in (not with the beginning level of) short-term rates, using fed funds as the risk-free rate. We selected fed funds because there is an active futures market that can be used to measure expectations for changes in that rate.  At present, the fed funds futures market indicates that the rate is expected to decline over the next few months.

Clearly, we are enthusiastic about MNA.  However, we do not own the ETF right now. Our outlook on the stock market is a bit too positive, the expected return spread over Treasuries is a bit too thin, and short-term rates are too likely to decrease rather than increase, in our opinion. However, we are watching closely for an opportunity to jump into MNA, and it won’t take much to push us over the edge.