The presence of many individual country ETFs (exchange-traded funds) and CEFs (closed-end funds) makes country-targeted investing easy.  It can also be profitable.  This article will highlight several characteristics that have provided consistent risk-adjusted excess return, including value-, quality-, and sentiment-related factors.

The Country and Regional ETFs Universe

Before presenting the results of our research, I should define the universe of country and regional ETFs that we at Sapient Investments use for both research and investment.   We include most, but not all, country and regional ETFs within our universe.  We are sensitive to transaction costs, so in those cases where there is more than one ETF within a country or region, we use the most liquid one as measured by the average bid-ask spread.  We also give some consideration to the expense ratio and the total assets if there is a close call. 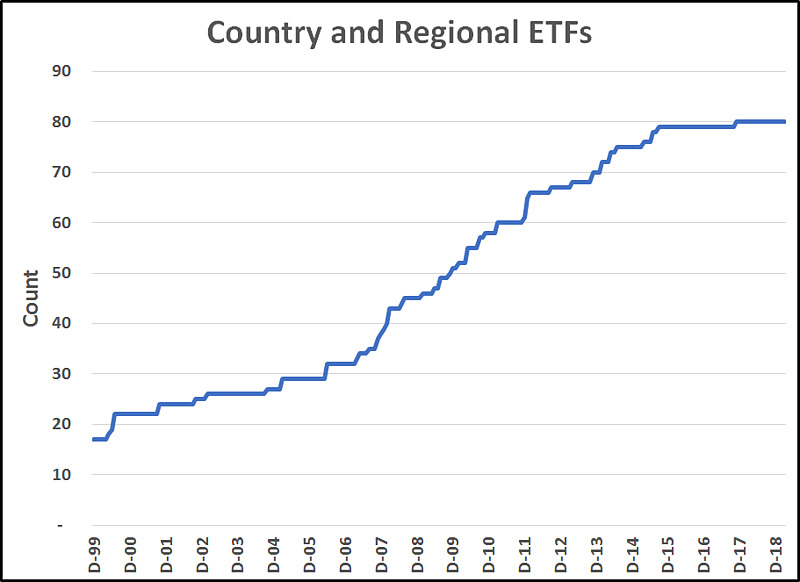 As shown in the graph above, at the end 1999, there were only 17 ETFs in our Country and Regional ETF universe.  The number steadily increased so that by the end of 2008 the count was 45.  Currently, the count is 80, which gives us a very diverse opportunity set.  Of the 80, the vast majority—66—are focused on a single country and only 14 are regional.  Some countries have more than one ETF.  For example, several countries have a large cap ETF and a small cap ETF.  A few offer a U.S. dollar hedged version.  This universe is also very investable, with a median bid-ask spread of only .06% and an average expense ratio of .56%. While this is expense level is higher than that of most broad, capitalization-weighted index funds, international investing is by nature more expensive.

We are able to analyze an ETF similarly to how we analyze a stock using aggregate fundamental data provided by FactSet. Based on the constituents of an ETF, which are publicly available daily, FactSet aggregates the fundamental data for the constituent stocks owned by the ETF at that point in time.  We have found that the same factors (characteristics or attributes) that published academic research has found to be helpful in selecting individual stocks are also helpful in selecting countries.  These factors can be grouped into the following categories:

In this article we will focus on one factor in each category for illustrative purposes.  In our live investment process, we tend to use 2-4 separate factors within each category.

Forward EPS is the consensus analyst EPS estimate for the next 12 months.  Dividing this figure by price makes it a forward earnings yield.  “TSR” stands for “time-series relative.”  We subtract the median forward EPS/Price over the past 36 months from the current observation.  An observation that is high means that the constituents of the ETF are cheaper than usual. 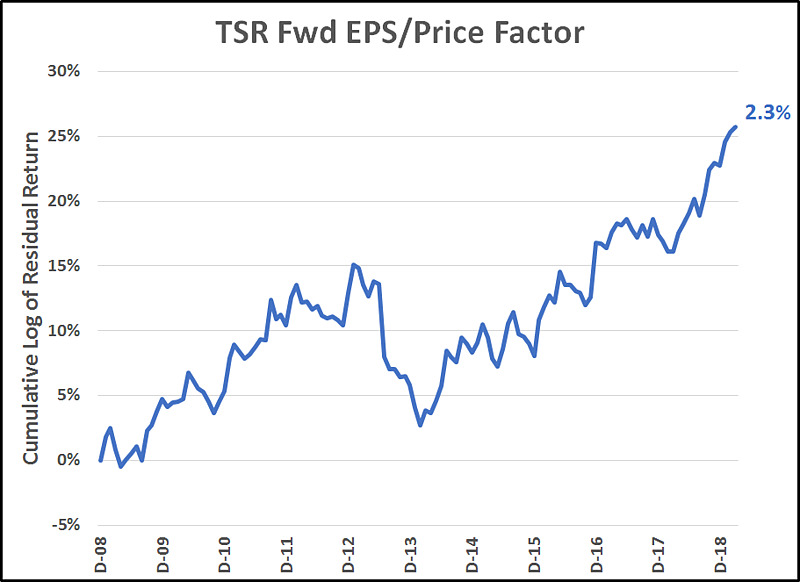 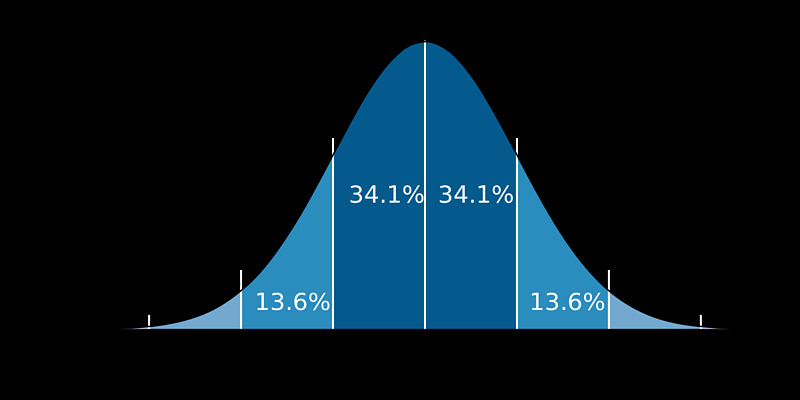 The cumulative return graph above showed a cumulative return of about 27% since 2008, which equates to about 2.3% per year.  2.3% does not appear very impressive on the surface.  However, note that it is not cumulative total return that is being measured but the log of cumulative residual return.  The distinction is vital. The vast majority of return for country and regional ETFs is systematic return, most especially return derived from an ETF’s market beta or sensitivity to the market.  Residual return is the return that is left unexplained by an ETF’s systematic risk factor sensitivities.  Over the long-term, the average residual return for all of the ETFs in the universe is statistically indistinguishable from zero!  That’s right.  There is no alpha. Overall, on average, over the long term, ETFs earn returns only from their systematic risk sensitivities, especially their sensitivity to the market (or market beta).

EBITDA is earnings before interest, taxes, depreciation and amortization.  The EBITDA Margin is that figure divided by total revenues.  It is a measure of profitability.  “TSR” stands for “time-series relative.” We subtract the median forward EPS/Price over the past 36 months from the current observation.  An observation that is high means that the constituents of the ETF are experiencing better than normal profitability. 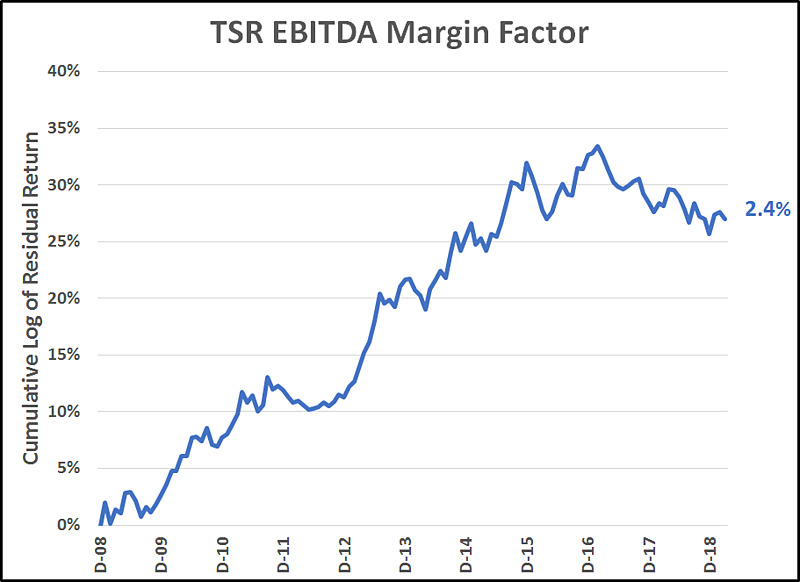 With an annualized average residual return of 2.4%, EBITDA Margin was especially powerful until the end of 2016, but since then it has been perverse.  However, this factor worked particularly well during 2013 when the value factor mentioned above (TSR Fwd EPS/Price) was perverse.  This highlights the benefit of combining different kinds of factors together in one overall selection model.  Together, many factors can diversify each other, providing a much steadier return.

The changes that analysts make in their forecasts of future EPS have been shown to be a powerful predictor of future relative performance for stocks.  “Diffusion” is calculated as (#up - #down) / (#up + #down), which is a way of calculating %up-%down.  “# up” means the number of upward analyst revisions of EPS in the last month.  At Sapient Investments, we use a fairly complex way of incorporating changes in the EPS forecasts that analysts make for the underlying constituents of an ETF, combining data for the next two fiscal years. 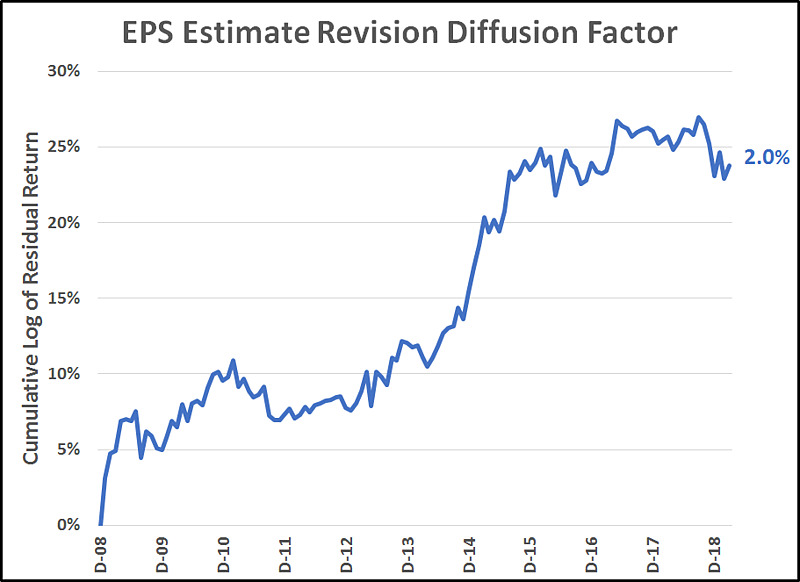 Because it is based on changes in the estimate of future earnings, EPS estimate revision diffusion tends to be the most forward-looking factor, providing an early warning if the outlook for a country or region is changing.  It has had a reasonably attractive annualized average residual return of 2.0%, albeit with a few significant drawdowns.

In addition to ETFs, there are also a number of country, regional, and global closed-end funds (CEFs). Like ETFs, CEFs trade on exchanges, and their prices may not be equal to the net asset value (NAV) of their underlying portfolios.  This is in contrast to mutual funds which are bought and sold directly with the fund sponsor at exactly the daily NAV.  CEFs most often trade at discounts to their NAV, and sometimes the discounts can be quite large, providing an attractive entry point.  Also, unlike ETFs, CEFs are actively managed, which means that their expense ratios are higher, but also that they can add return relative to an index.  In less efficient international markets, this can be a distinct advantage. 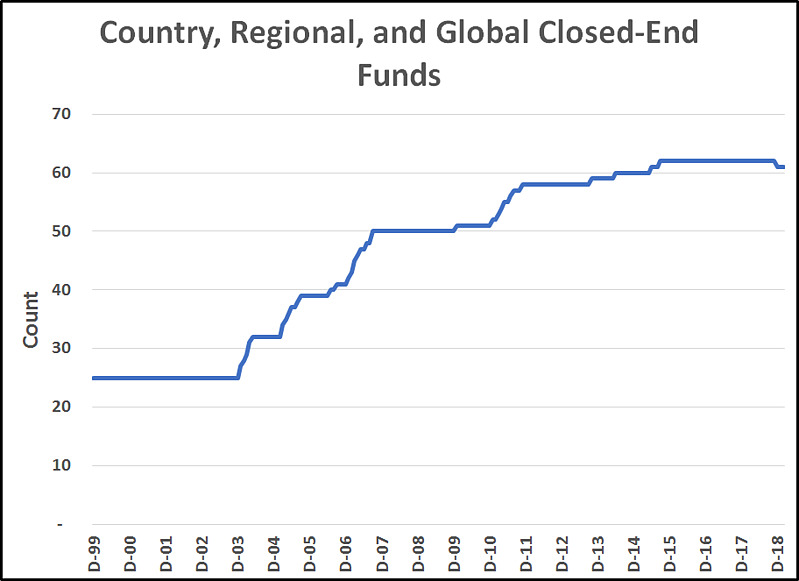 As shown in the graph above, at the end 1999, there were 25 CEFs in our Country, Regional, and Global CEF universe.  Starting in 2003, the number steadily increased so that by the end of 2008 the count was 50.  Currently, the count is 61, which gives us a very diverse opportunity set.  Unlike with ETFs, of the 61, the majority—34—are global, although some focus on a particular industry.  7 have a regional emphasis, and 3 focus on emerging markets.  17 of the 61 invest in a single country market.  CEFs are more expensive to own and to trade than ETFs.  The median bid-ask spread is .25% and the average expense ratio of 1.54%.  However, most closed-end funds utilize some leverage (up to about 33%), and the cost of leverage is included in their expense ratios.

Their higher costs would make CEFs unattractive except for one thing:  their discounts to NAV.  Currently, the average discount to NAV within our Country, Regional, and Global CEF universe is 9.5%.  That means that on average, you can buy $100 worth of assets for $90.50.  This is attractive whether or not the discount ever closes, since the additional assets provide ongoing economic value to the owner in the form of earnings and dividends.

In addition, those CEFs with higher than average NAV discounts do tend to mean-revert to the average for the universe overall.  This tendency is very strong and very consistent, as shown in the graph below. 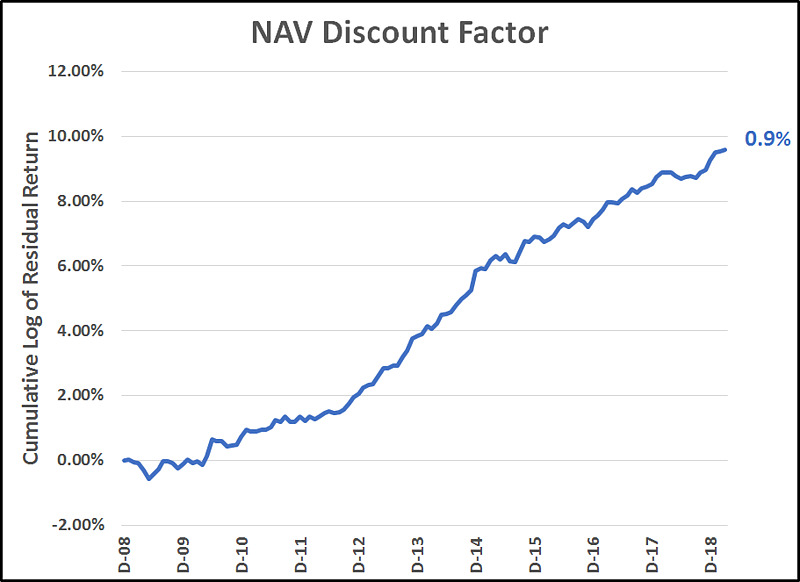 The scale for this factor graph is a bit different than for those above because the unit of measure is not a 1 standard deviation above average factor exposure but rather an NAV discount of 1% above average.  The changes in these discounts relative to each other are very dynamic, and quickly mean-revert.  As shown above, the average annualized monthly residual return for each 1% above-average NAV discount is .9%, with almost ruler-like consistency.  That is, in twelve months’ time, 90% of the deviation from the universe average NAV discount is expected to close, on average.

Although aggregate fundamental data is not available for CEFs, they can still be an attractive way to invest in certain countries when they trade at a substantial discount to NAV.  I have written more elsewhere about CEFs and the possible reasons for their inefficiencies.

It is certainly possible to add noticeable value by investing in individual country ETFs and CEFs.  We examined four different factors that could be used for that purpose:  three fundamental factors applicable to ETFs and the NAV discount factor applicable to CEFs.   Combining exposures to many different kinds of factors with low correlations to each other should help lower the volatility of the residual return.  Even with a generous level of transaction costs (bid-ask spread and commission), the potential returns are economically significant.