The Case for International Small Cap

Higher return/risk.  It is well known that over the long-term, the U.S. stock market has exhibited a “small cap effect.”   Although small cap stocks have had a higher level of volatility, their higher returns have more than compensated for that.  The same is even more true of international small cap stocks—note in the graph below that the return/risk tradeoff between small cap and large cap is much steeper for international than for U.S. stocks. 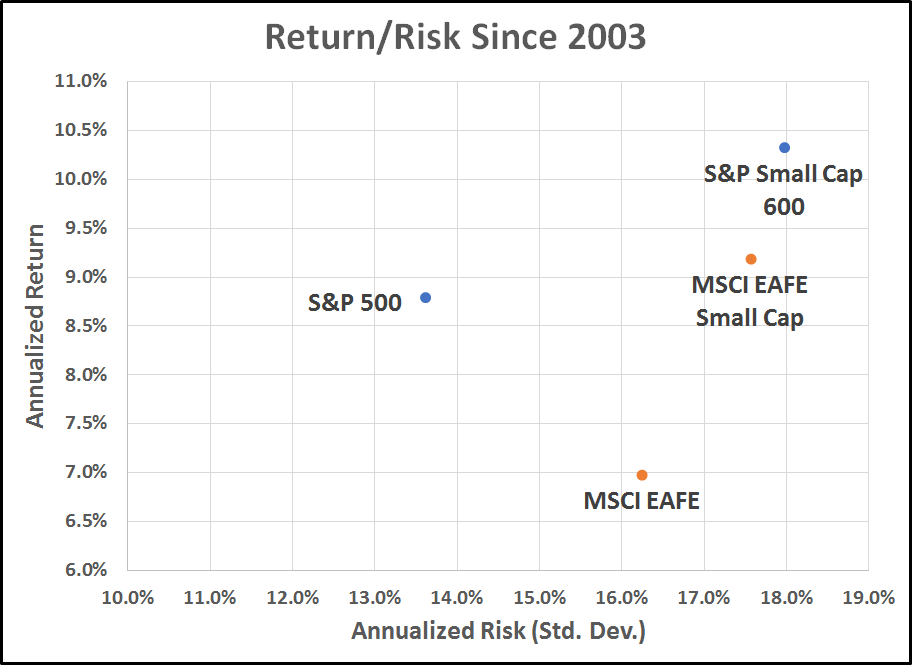 Lower correlation.  International small cap stocks have had a consistently lower correlation with U.S. stocks than have large cap international stocks.  This makes sense in that smaller companies are typically more focused on their local economies and less influenced by global factors. 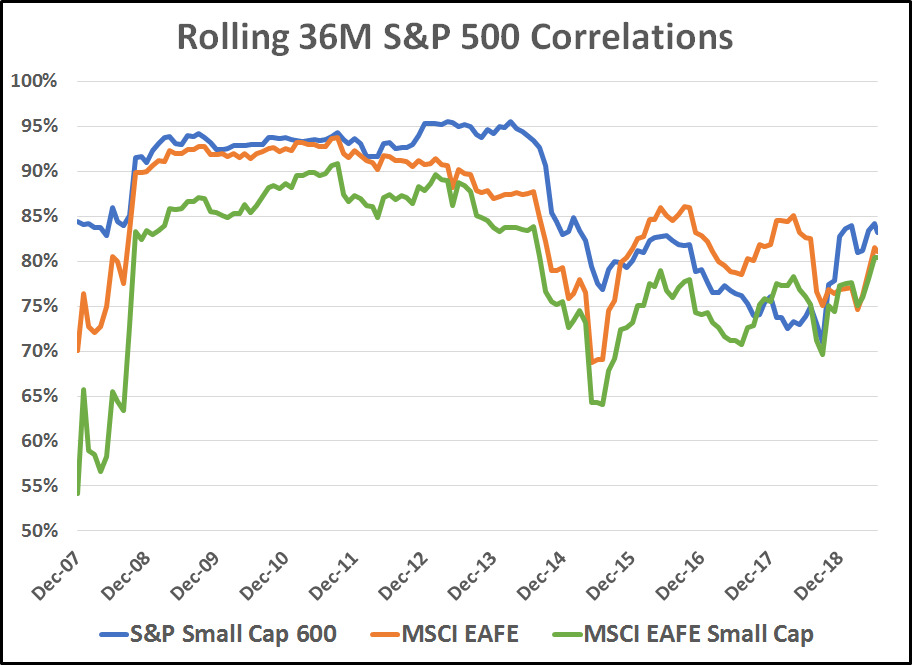 Fewer SEOs.  State-owned enterprises (SEOs) tend to put government political objectives ahead of shareholder interests.   Consequently, their stock performance often lags behind the local stock market average return.  SEOs tend to be among the largest corporations within their local markets.  A fund with an emphasis on smaller companies means fewer SEOs are likely to be in the portfolio.

Lower trade war impact.  Small cap stocks typically do not have as large a percentage in global sales as large cap stocks.  Most of their business is in their local economies.  In an era of rising trade tensions, this may be a significant plus.

Our international ETF universe contains 80 country- and region-specific international ETFs.  Most of these are large-cap oriented, but a few focus on small caps.  Two of the small cap international ETFs have risen to the top of our expected return forecasts:  WisdomTree Europe SmallCap Dividend Fund (DFE) and WisdomTree Japan SmallCap Dividend Fund (DFJ).  Both of these follow a similar weighting methodology.  Dividend-paying stocks are sorted by market cap, and small cap is defined as the bottom 25% of such companies.  After liquidity filters have been applied, the constituents are weighted by aggregate dividends paid over the preceding 12 months.   Thus, stocks are weighted by the value of dividends paid, not by dividend yield.  Consequently, larger and more liquid stocks are given greater weight than would be the case with weighting based on yield.   Still, because aggregate dividends paid is the fundamental metric used for weighting, the result is generally a higher dividend yield than for a cap-weighted index.  Yield is generally recognized as a value indicator.  Thus, these two ETFs provide simultaneous exposure to two factor anomalies:  1) small size and 2) value.

What makes these two ETFs attractive is their unusually attractive value.  They have fallen significantly since their February 2018 peaks, as shown in the graphs below. 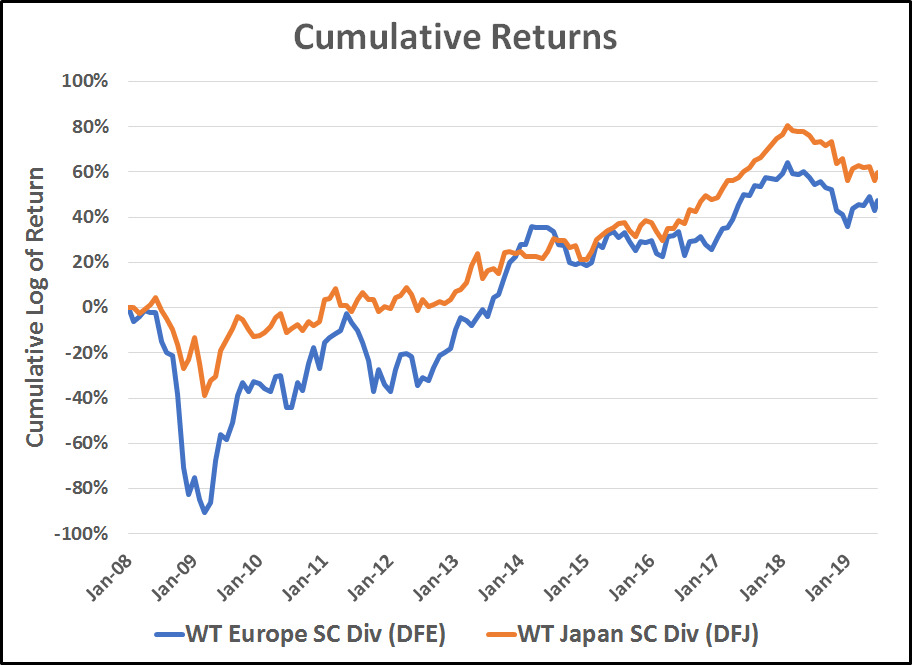 Highly respected academic research has found that certain factors have contributed to substantial risk-adjusted excess return in stocks over many years.  The most powerful and consistent factors tend to be related to certain themes, including value, momentum, quality, and sentiment.  At Sapient, we use a combination of factors related to these concepts to select ETFs (exchange-traded funds) and CEFs (closed-end funds).

We are able to analyze ETFs much like we would analyze stocks because our database (FactSet) aggregates stock-level information on ETF stock holdings up to the ETF level.  For example, the E/P (earnings yield) of an ETF is based upon the E/Ps of the ETF’s stock holdings aggregated up according to their portfolio weights.

Importantly, we believe that certain themes and factors work better at some times than at other times.  We believe that factor payoffs follow a trend-following pattern.  That is, if a factor has been working well recently it is likely to continue to work well.  Specifically, we vary the weights among the factors that we use based upon their payoffs over the preceding 36 and 120 months.

Within our international ETF universe, value has been working very well.  In particular, two value factors which we highlight below.

Time-Series Relative (TSR) Forward Earnings Per Share / Price compares the current forward earnings yield (EPS/price) of an ETF to its 36-month median.  Forward earnings is the average of analyst earnings forecasts for the next 12 months.  A higher earnings yield number means that value for the ETF is better than in the recent past.  A TSR factor can greatly improve the comparability of a factor across ETFs that are not very homogeneous.  International accounting standards can very among countries, for example.  Also, analyst coverage can vary a great deal across the globe.  Comparing the current company’s factor to its own historical median or average helps control for these differences.

Our research indicates that within our international ETF universe the TSR Fwd E/P factor is the single most powerful ETF selection factor in our arsenal.  The graph below illustrates one of our research tests for that factor.  We begin our test at the end of 2007 when the number of ETFs with data for this factor reached a critical mass of 37.  (Currently, of the 80 ETFs in the universe, 73 have data for this factor.)  At the end of each month, we form a “Top 5” portfolio of the 5 ETFs with the highest TSR Fwd E/P.  Each has a 20% weight.  We calculate the residual (risk-adjusted) return of this portfolio during the month and then re-select and rebalance the “Top 5” portfolio at the end of the next month, and so on.  Similarly, at the end of each month we also form a “Bottom 5” portfolio of the 5 ETFs with the smallest, or most negative, TSR Fwd E/P, re-selecting and rebalancing monthly.

In the graph below, the blue line is the cumulative log of residual return of an equal-weighted portfolio of the 5 ETFs with the largest TSR Fwd E/P, rebalanced monthly.  Since 2007, the average log of residual return (net of risk effects such as equity market returns and changes in the U.S. dollar) has been 5.3% per year on average.  The orange line is the same thing but investing in the 5 with the smallest (or most negative) TSR Fwd E/P.  That return has been           -7.1%.   The green line is a long-short implementation of the strategy.  Its return has been 12.3% per year. 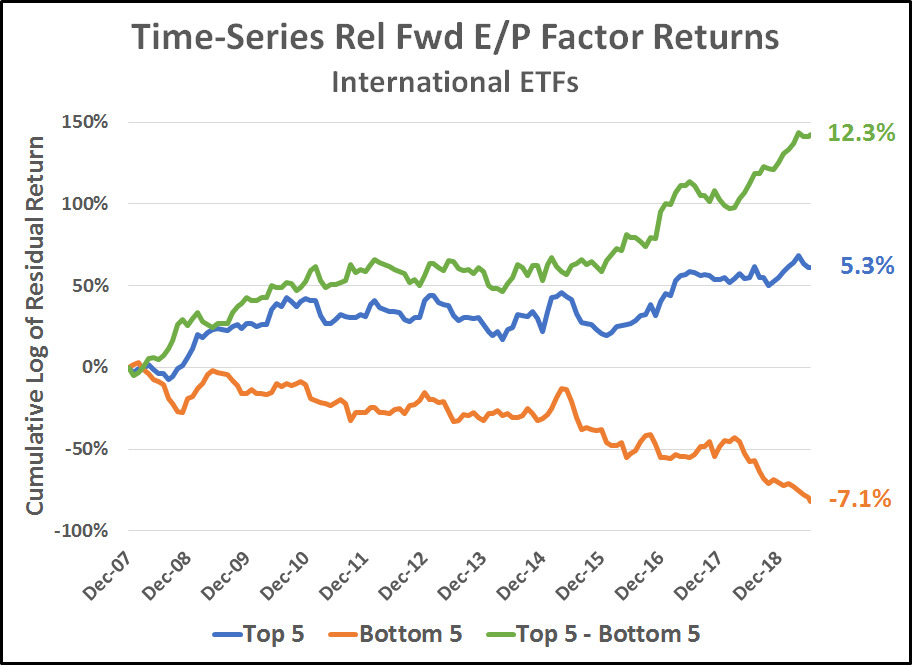 The graph below shows the strong increase in forward earnings yield for both DFE and DFJ over the last couple of years. 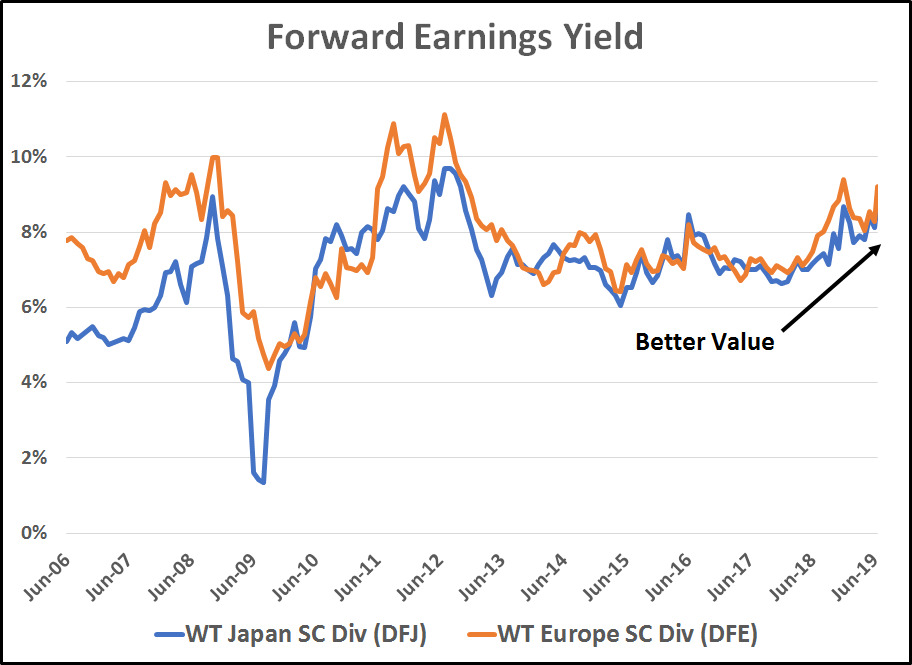 Mean Reversion is the second most powerful predictor of risk-adjusted excess return, just behind TSR Fwd E/P.  These two are head-and-shoulders above all other factors within our international ETF universe.  Although both of them are value-related factors, their correlation to each other is modest.

Similarly to the graph above, in the graph below, the blue line is the cumulative log of residual return of an equal-weighted portfolio of the 5 ETFs with the largest Mean Reversion, rebalanced monthly.  Since 2007, the average log of residual return (net of risk effects such as equity market and interest rate betas) has been 0.4% per year on average.  The orange line is the same thing but investing in the 5 with the smallest (or most negative) Mean Reversion.  That return has been -11.2%.  The green line is a long-short implementation of the strategy. Its return has been 11.5% per year. 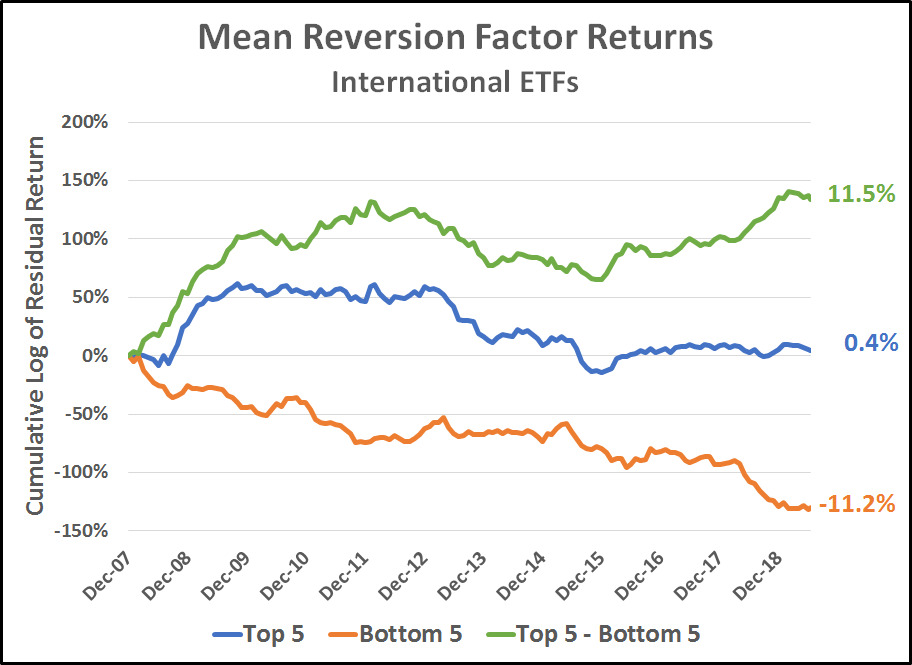 The two factors analyzed above represent a subset of the factors that we currently use in our international ETF selection model at Sapient Investments, but they are the two most important ones.  Importantly, those factors are used to forecast risk-adjusted return, not total return.

In addition to the factors we use to forecast risk-adjusted return, we also forecast risk-related return. For equity ETFs, this forecast is primarily driven by our return expectation for the overall stock market and the ETF’s stock market sensitivity or “beta.”   We use the S&P 500 to represent the stock market, since our clients are U.S. investors whose equity exposures are reflected in that index.  Our proprietary four-factor risk model indicated that DFE and DFJ had stock market betas of .59 and .75, respectively, on June 30, 2019.  At that time, we were forecasting a stock market return of 9.00% per year, or .75% per month, so the one-month stock market return forecasts for DFE and DFJ were .44% (.59 x .75%) and .56 (.75 x .75%), respectively.

Adding the risk-adjusted and risk-related forecasts together resulted in total monthly return forecasts of 1.34%% and 1.52% for DFE and DFJ, respectively, on June 30, 2019. 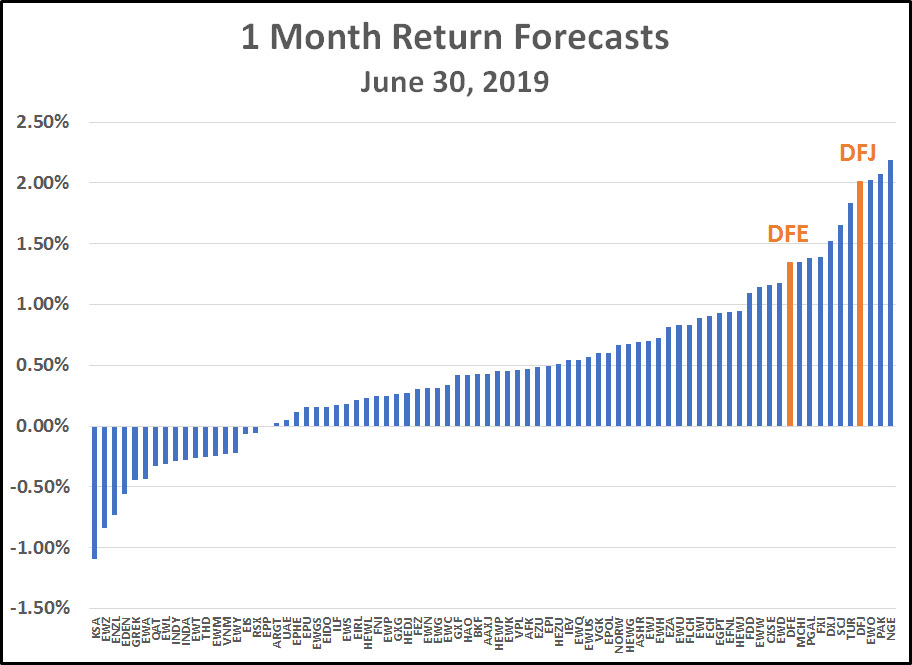 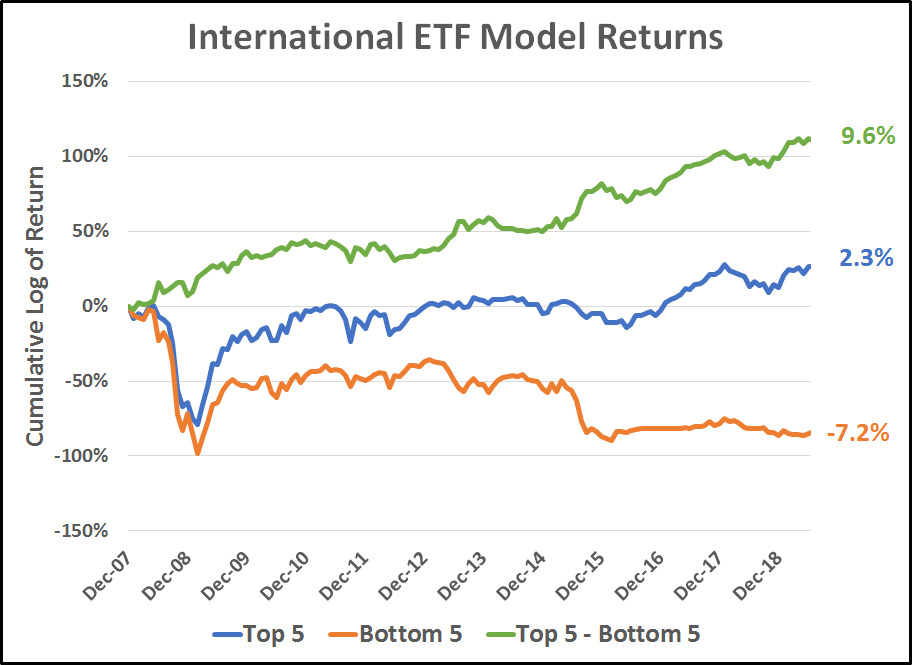 When making the final selection of ETFs for the portfolio, although expected return is the primary driver, it is not the only consideration.  We also consider the costs of trading and owning an ETF, as well as the volatility of its returns.  DFE and DFJ both have relatively modest expense ratios of .58% each and a very low bid-ask spreads of .08% and .10%, respectively.  (Some of the ETFs with higher expected returns in the 1 month return forecast graph above had much higher expense ratios and/or bid ask spreads.)  As small cap ETFs, the level of historical volatility for DFE and DFJ was slightly above average.  All of these inputs combine into an overall attractiveness rating (or “utility”).  DFE and DFJ had June 30, 2019 utility rankings at the top of our international ETF universe.