Fed policy doesn’t always drive the U.S. stock market, but it certainly has over the past few years according to my quantitative research. Since the outbreak of Covid-19 in early 2020, the Fed has been smashing down the accelerator, first by reducing short-term interest rates to zero, and when those bullets had been used up, by introducing an even more aggressive round of quantitative easing, which it had begun in the wake of the Great Recession of 2008. Those actions had a pronounced effect on stocks, pushing up their prices.

Rampant inflation has now forced the Fed to slam on the brakes in a belated attempt to subdue inflation. We have already seen the early effects on stock prices. As the hawkish policy continues and spreads to “Quantitative Tightening” or the reduction in the Fed’s enormous Treasury and mortgage-backed bond holdings, the effects are likely to continue. There is no reason to believe that the strong effects of easing on the way up will not be mirrored with the strong effects of tightening on the way down.

The Fed funds rate is the rate at which banks lend their excess reserves at the Fed to other banks in need of increasing their reserves. As such it directly affects the ability and willingness of U.S. banks to make loans. It is also a key interest rate that has a rippling effect on many other interest rates. The Federal Reserve has traditionally made managing the Fed funds rate its primary tool of monetary policy.

Prior to December 16, 2008, the Federal Open Market Committee voted on a target Fed funds rate, but on that date, the Fed changed to a policy of announcing a target range of zero to .25%. Each change after that has been to establish a new range in increments of .25%.

Monetary policy changed after the Great Recession of 2008, perhaps forever. The Fed funds rate was pushed down to an historic low of 0% to .25% and kept near zero until the end of 2015. Never before had the Fed gone to such extremes to stimulate the U.S. economy, and never for so long, and rarely with so little apparent effect on economic growth. It did boost the stock and bond markets, however.

After a time, the markets began to grow concerned about when the Fed might began to “normalize” interest rates. With the growing anxiety came growing attention to any signals from the Fed about its future policy moves. The Fed funds futures market is the best barometer of the market’s worry about increased interest rates. Arguably, this factor has been one of the primary drivers of the stock market in recent years. Indeed, my own research confirms this. When trying to ascertain what the Fed is likely to do in the months ahead, the Fed funds futures market provides a very handy gauge of consensus market opinion, and as such it can be a helpful asset allocation indicator for stocks.

Fed funds futures contracts are traded with monthly maturities out as much as 36 months into the future. However, liquidity for Fed funds futures contracts (as measured by open interest) tends to be highest for nearby contracts. On the other hand, my objective is to measure expectations with respect to future effective Fed funds rates, with a relatively constant horizon length that will be long enough to encompass at least a couple of Federal Open Market Committee meetings. Open interest is still fairly good out six months, so I selected that horizon. 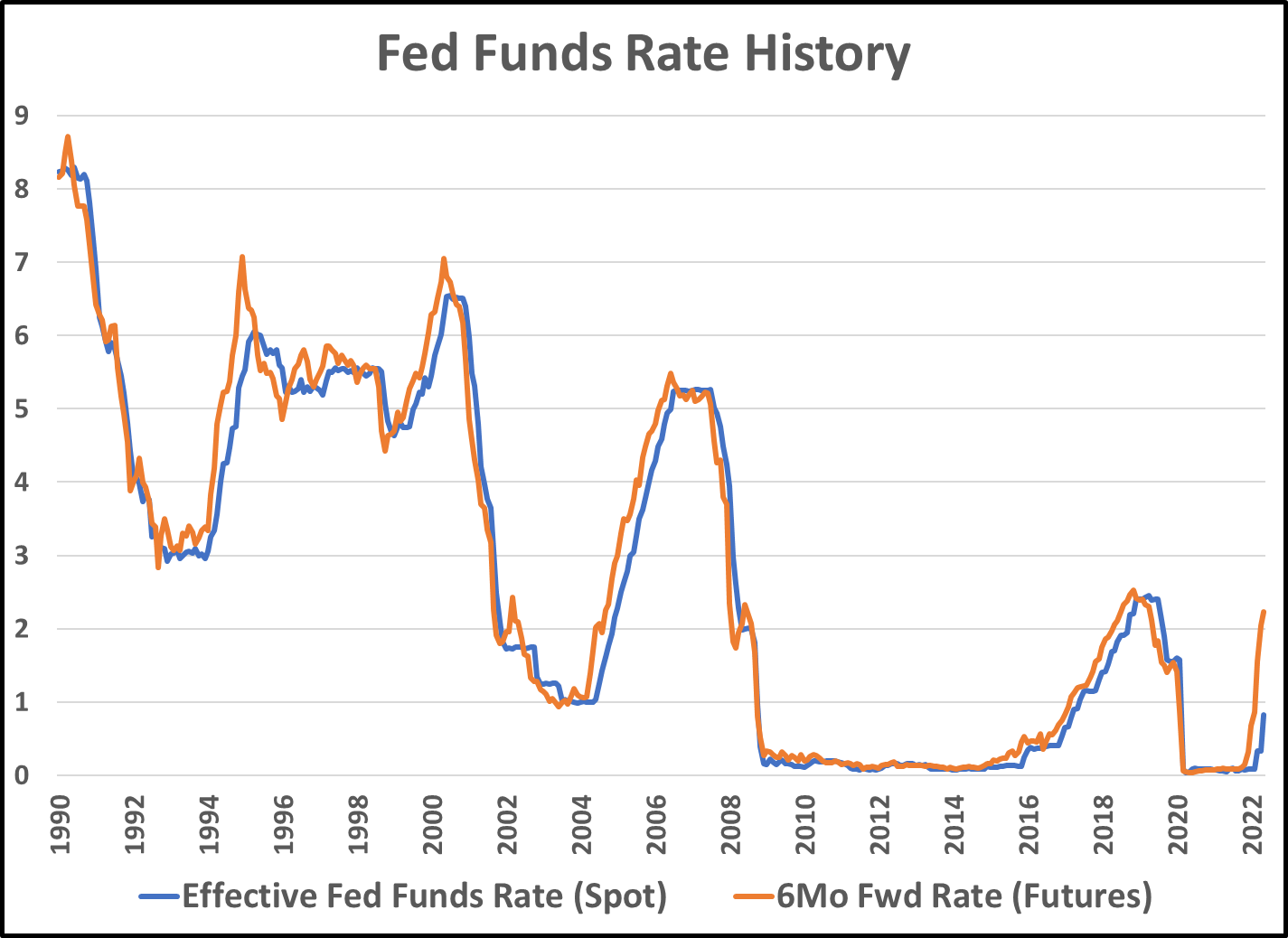 As shown in the graph above, the 6-month forward implied rate is sometimes a bit above the current effective Fed funds rate, and sometimes it is a bit below. Importantly, changes in direction are usually reflected in the futures market before they happen in the spot market. This is why using futures is much more effective as an input to a market forecast. The stock market is driven by expectations, and particularly, changes in expectations. 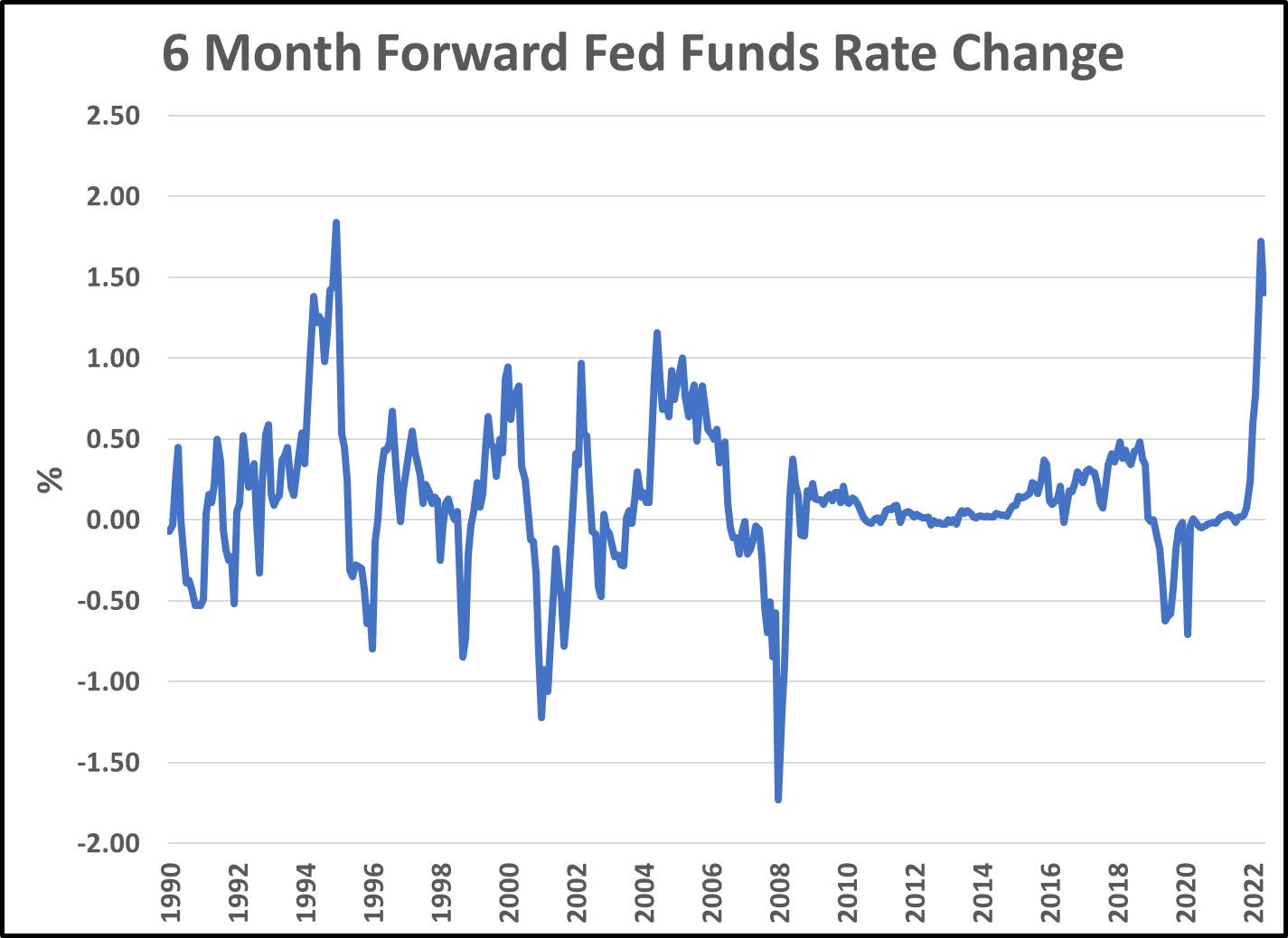 The graph above shows the expected change from the current effective Fed funds rate over the next six months implied by the 6-month forward futures market price. My research shows that an expectation of future monetary tightening, reflected by an expected increase in the Fed funds rate, is negative for stock market returns, and vice-versa. Over the past few weeks, the expectations for Fed tightening have risen to historic proportions.

I use a 9-factor model to forecast stock market returns. The return forecasts are composed of two parts:

Normally, the overall return forecast for the S&P 500 (the index I use for U.S. stocks) is in the high single digits (5%-10%), which is in line with the consensus of most market forecasts. However, recently, my tactical market forecast has turned decidedly negative, mainly because of the tightening of Fed policy. 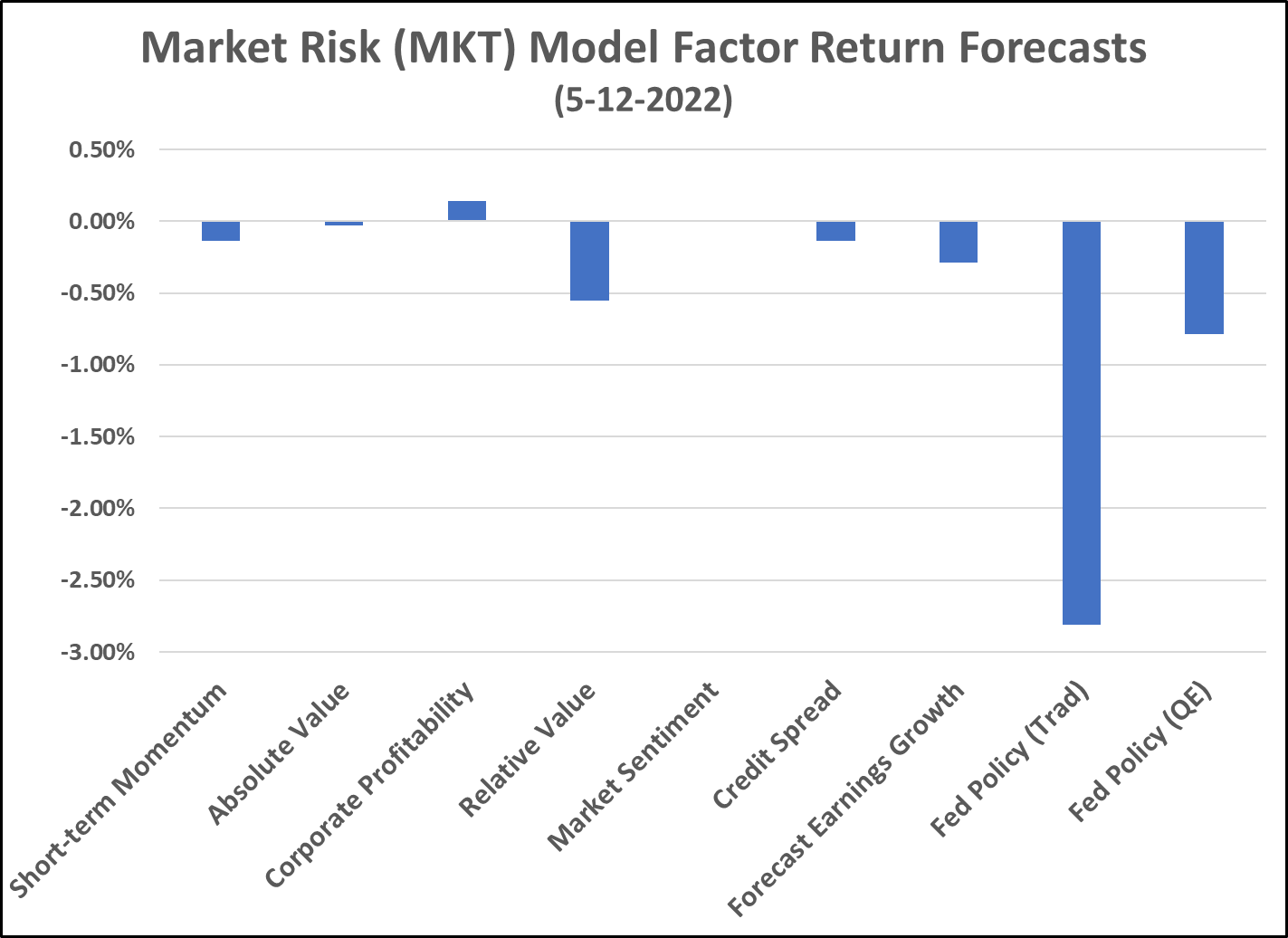 The factor labeled “Fed Policy (Trad)” in the graph above is measured by the expected change in fed funds based on the six-month futures price. My factor forecasts take into account the level of the factor itself as well as its historical payoff in a set of regressions over 36 months to 120 months. The reason that the current forecast is extremely negative is that the futures market indicates an expectation for the fed funds rate to increase by about 1.5% (more than ever before) and these expected changes in fed funds have been extremely powerful in forecast near-term stock market returns.

My main point is to highlight the extent to which Fed policy is driving the stock market. At least for the next several months, look for “Fed watching” to be the market’s obsession.