One of the most important dimensions of equity investing is the “style” aspect. That is, how much to emphasize value stocks compared to growth stocks. Proponents of market efficiency tend to argue that equal (market-weighted) emphasis should be applied to both. The basic idea is that since it is impossible to know which is likely to outperform the other, the most prudent approach is to market-weight them. Vanguard is one well-known organization with this viewpoint.

Some investment organizations put a greater emphasis on one or the other. For example, firms that specialize in managing taxable stock portfolios for the wealthy often prefer growth stocks because they are more tax-efficient, since more of their return is in capital gain rather than dividend income. (Capital gains can be deferred indefinitely whereas dividends are taxed when they are received.) Alternatively, some firms tilt towards value because of academic studies (now rather dated) that found that value stocks produced superior returns, especially on a risk-adjusted basis. Dimensional Fund Advisors (DFA) is one well-known firm with a value tilt.

At Sapient Investments, we give a lot of weight to academic studies, especially more current ones, and we are constantly updating our own research to confirm and quantify inefficiencies in the capital markets that might give us an edge. More recent research, confirmed by our own work, indicates that factors of all kinds (including value and growth) exhibit momentum.   That is, whether a factor is likely to “work” in the near future (next month for example) can be at least partly forecast based upon the extent to which that factor has generated excess return in the recent past.  We apply this principle to all sorts of factors, including those related to value vs. growth.

Russell Investments, a very large institutional investment consulting firm, introduced the first style indexes in 1987, having previous established a series of size-based indexes.  Return data for their indexes begins at the end of 1979. They separate value companies from growth companies using a mix of three factors: 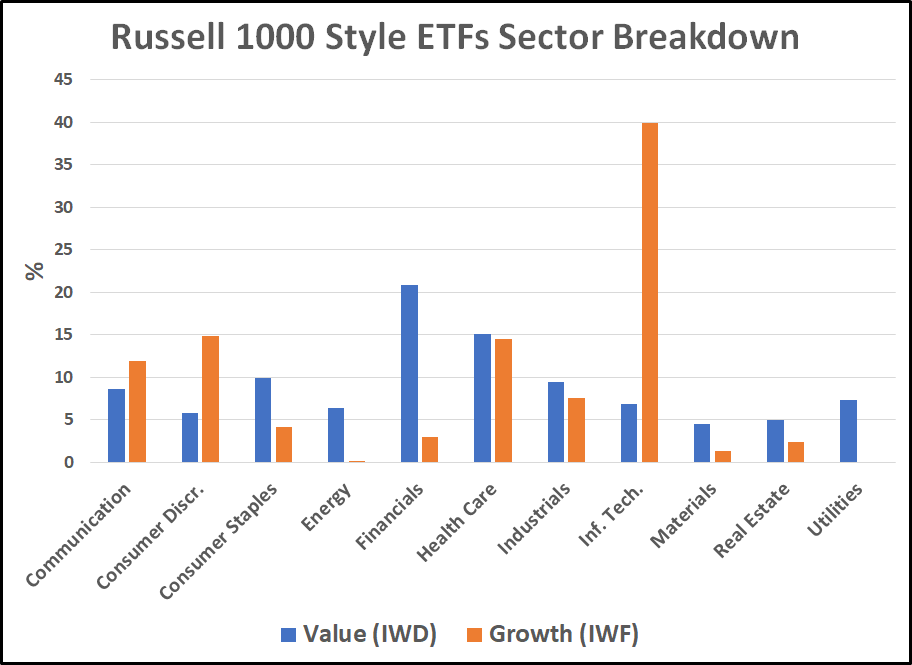 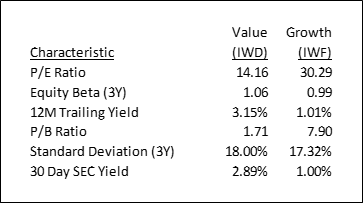 As expected, the value ETF has a much lower P/E and P/B, and a much higher yield.  Somewhat surprisingly, the value ETF has a slightly higher beta and standard deviation (volatility).  Historically, this has not been the case, but this year (2020) has been particularly hard on the value ETF, with it dramatically underperforming the growth ETF, driving up its trailing volatility and market beta.

Despite well-known studies (now rather dated) that found value investing to be a superior strategy compared to growth investing, the current long-term record no longer supports that assertion. Russell return data from inception (12/31/1979) through May 31, 2020 shows that the growth index has achieved a total return of 11.3%, with the value index having nearly same return at 11.2%.   This is essentially a statistical dead heat. Yes, for much of the history depicted in the graph below, the past returns of the value index were indeed higher than for the growth index, sometimes by a wide margin. However, the post-Great Recession era saw the growth index make up all the lost ground and then some. 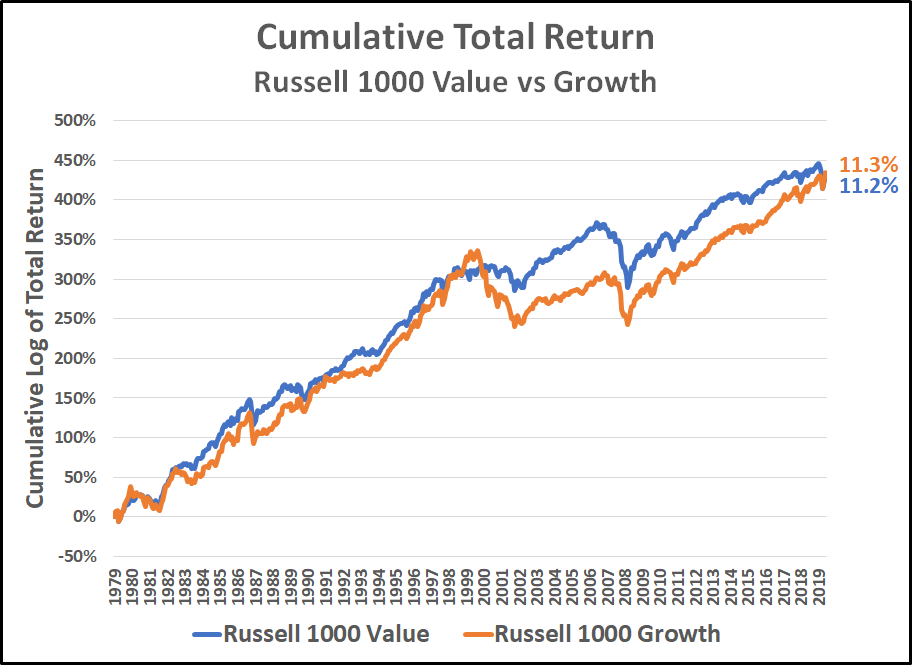 The Cyclicality of Value vs Growth

The “value factor” is given by the return of the value index minus the return of the growth index.  It is often labeled “VMG” for “value minus growth.” The monthly performance of VMG has not been statistically random. Statistically, there are definite periods that favor either value or growth. The monthly serial correlation of VMG has been 16% since 1979. That is not even close to random and indicates trending behavior.

A well-informed rational investor would like to take advantage of the serial correlation. However, it is not a riskless source of return. There is definitely a lot of month-to-month variability. Still, a good starting point for predicting VMG for next month is to assume a continuation of the recent VMG trend. 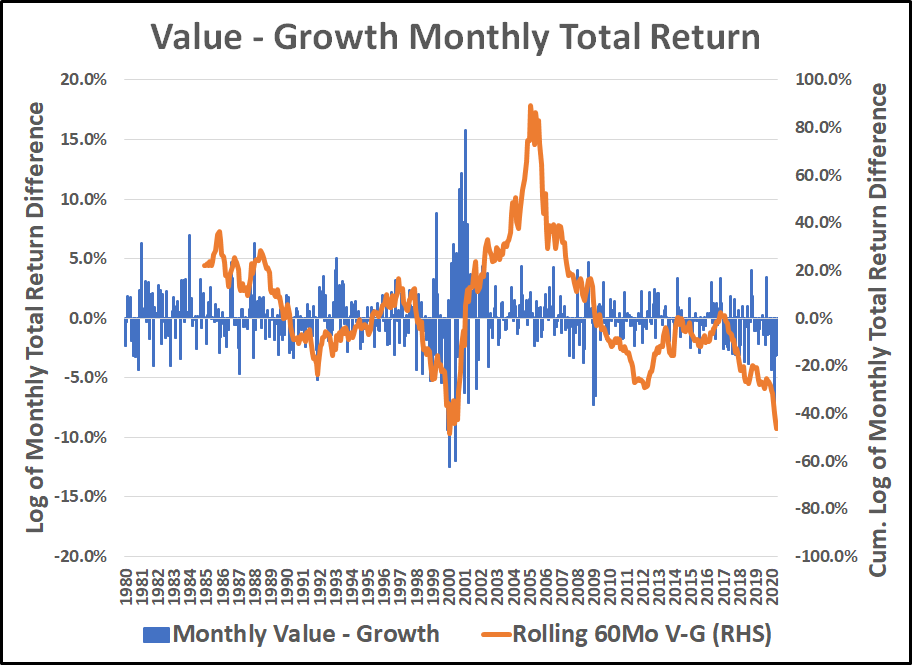 As shown in the graph above, when grouped into 60-month rolling periods, it becomes clear that certain value vs growth cycles have been evident in past returns. However, no trend lasts forever. At times a well-established trend has reversed. Sometimes it appears to be triggered by an extreme cumulative return in one direction, but not always.  There is no strongly predictive way of identifying when these reversals are likely to happen.

At Sapient Investments, we use a proprietary 12-month exponentially-weighted moving average to capture trends. This methodology means that if a reversal occurs, we are likely to pick up on it within a few months. However, if the reversal is strong, those few months can be very painful.

Recently, the cumulative underperformance of value-growth has reached a point similar to that of the height of the internet bubble. After the internet bubble, growth crashed much harder than value. Is the same fate for growth ahead now?

I think not.  Unlike in the internet bubble era, the recent run of growth outperforming value has been fueled by the fundamental superiority of growth stocks, specifically growing differences in profitability.

The Fundamentals of Value vs Growth

The graph below shows the history of one important fundamental variable:  return on invested capital (ROIC).  “Return” is net income. “Invested capital” is a broad measure of capital investment that includes both shareholder’s equity and long-term debt. ROIC is a broad measure of profitability applicable to most businesses. As shown below, starting in 2000 (with the inception of the two ETFs), the profitability of growth companies was roughly comparable to that of value companies.  However, after the bursting of the internet bubble, the profitability of growth companies began to increase dramatically.  The weighted average return on capital for the value index has stayed at around 6%.  The weighted average return on capital for the growth index increased from about 6% to about 15%--2.5x the value index.  This means that a dollar of earnings gets reinvested much more profitably, making each dollar of earnings much more valuable for growth companies than for value companies. 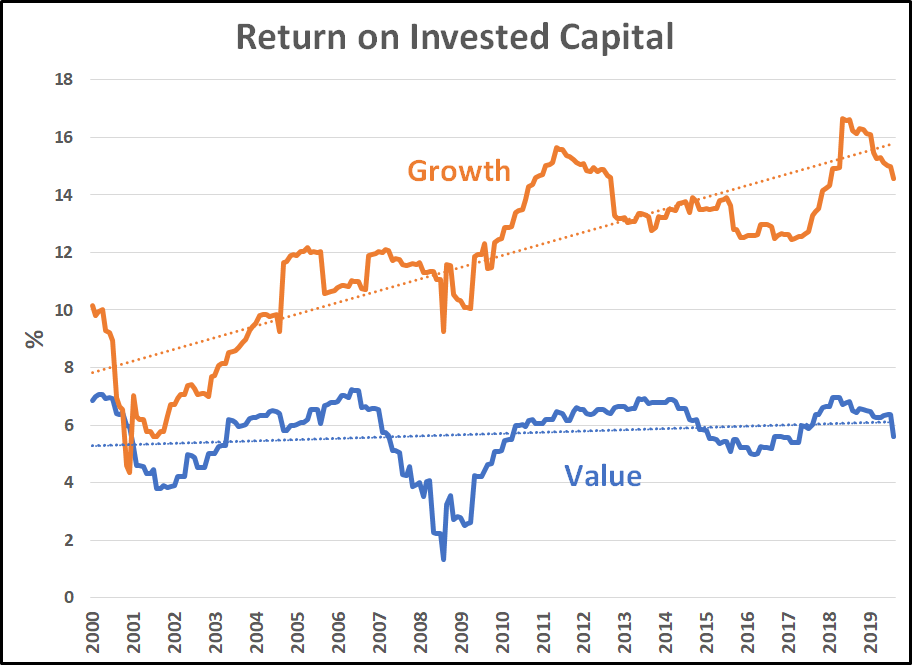 The efficiencies of the “new economy” are very real. Companies that are in a better position to take advantage of it are much more profitable, and consequently, much more valuable.  Arguably, the price/earnings (P/E) level for the growth index should be about 2.5x what it is for the value index, or something in that neighborhood.

There are many ways of measuring a P/E. One statistically robust methodology for calculating P/E is derived by smoothing the variability of earnings using a longer-term average of EPS. Professor Robert Schiller of Yale has made his “CAPE (cyclically-adjusted P/E)” methodology famous.  He averages the inflation-adjusted earnings for the past ten years to “cyclically adjust” the earnings.

In the graph below I use a simplistic variation on the CAPE by dividing price by the rolling 120-month moving average of earnings without adjusting for inflation, since inflation has not been a big issue in the U.S. for quite some time. As expected, the weighted average PE for the growth ETF has always been well above that of the value ETF. The growth/value ratio (shown in green) had been fairly close to 150% for most of the history of the two ETFs until recently, when it shot up to 200%. As mentioned above, the value index has been pounded thus far in 2020 due to the impact of the coronavirus on the U.S. and world economy. Value companies tend to be much more economically sensitive and cyclical. 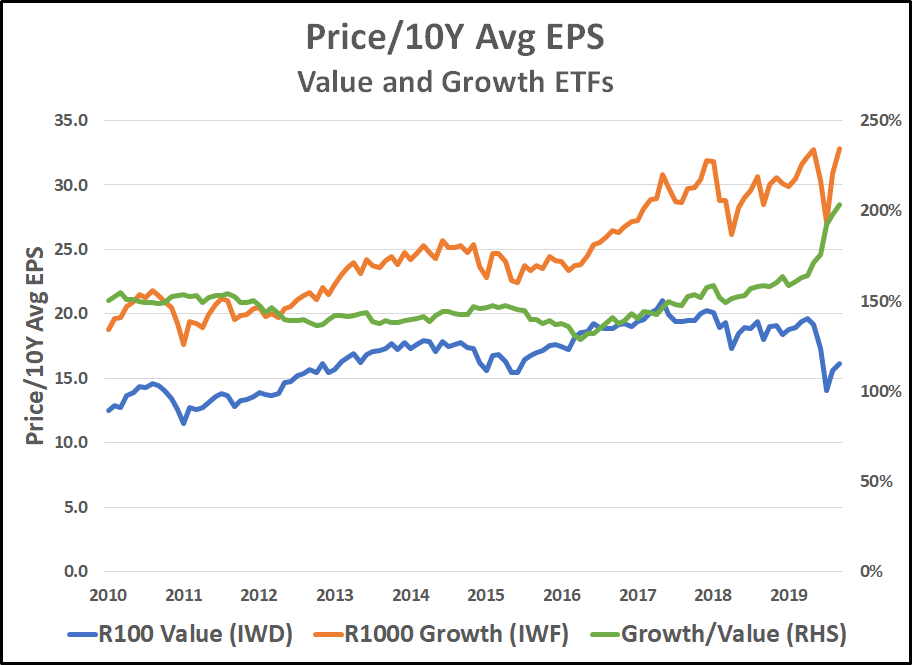 Did the market overcompensate for the impact of COVID-19 on value companies compared to growth companies? Only time will tell. No trend lasts forever, but the superior profitability of growth companies certainly provides strong support for their higher P/Es.