Vanguard’s target date funds include a meaningful allocation to international bonds despite their ridiculously low (or in many cases negative!) yields. Their rationale is based on the premise that global capital markets are efficient and asset prices provide a fair return that reflects their risks. This assumption is so firmly embedded in the Vanguard DNA that they are apparently unable to adjust to the compelling evidence that many international bonds are artificially overpriced and should be avoided.

Whenever I have been asked for investment advice by friends or family, I have always mentioned Vanguard prominently in my recommendations.  I think they do an outstanding job of keeping costs low, providing solid and well-diversified investment choices, and supporting investors with excellent information and customer service. That was all true back in the 1980s when I first started investing professionally and they were a much smaller organization, and it remains true today with Vanguard as investing’s 800-pound gorilla.

One way that Vanguard keeps costs down is by emphasizing index funds, which are very inexpensive to manage.  Their 1975 sponsorship of the first retail S&P 500 index fund under founder Jack Bogle is well-known.  The philosophical foundation for market-capitalization weighted indexation is market efficiency—the idea that asset prices fully and accurately reflect risk and return expectations. The implication of market efficiency is that active management is (on average) futile, and only serves to drive up costs.  There is ample evidence that on average, over the long-term, actively managed mutual funds have consistently underperformed their benchmarks by an amount roughly equal to their fees and transaction costs.

The case for capitalization-weighted indexation within a relatively free, well-researched, and highly regulated market such as the U.S. stock market is a strong one.  But when the assumption of market efficiency is applied to the selection of global asset classes, the case is less compelling. Asserting that U.S. stocks are efficiently priced relative to each other is not the same as asserting that global asset classes are efficiently priced relative to each other.  For one thing, if there are significant barriers to the flow if information and capital, asset classes within the global capital market may not be efficient relative to each other.  Also, efficient markets must operate freely, with participants buying and selling based on their assessments of expected risk and return, and without significant regulatory impediments.

Target date funds are a convenient way for many people to make one easy investment for their retirement.  The idea is that the mutual fund company will assemble a diversified portfolio of funds as components of the target date fund appropriate for those anticipating retirement within a certain timeframe, and they will modify the asset mix to become more conservative over time as the retirement “target date” approaches.  Vanguard is the largest sponsor of target date funds.

Vanguard’s Target Retirement Funds are known for having larger allocations to international (non-U.S.) stocks and bonds than most of their competitors.  In fact, most of their competitors do not include any international bonds in their allocations at all.  The reason that Vanguard does rests on their assumption that the relative size of market capitalizations should influence allocations.  If the global capital market is efficient, then the best starting point for assembling a well-diversified portfolio is the composition of the global capital market.  Of the four major asset classes, U.S. stocks and bonds and international stocks and bonds, the category of international bonds is actually the biggest of the four in terms of market capitalization.  Vanguard Target Retirement Funds allow for some “home market bias” that tilts allocations toward U.S. asset classes, but they can’t bring themselves to completely eschew foreign bonds, given their large weight in the global capital market. 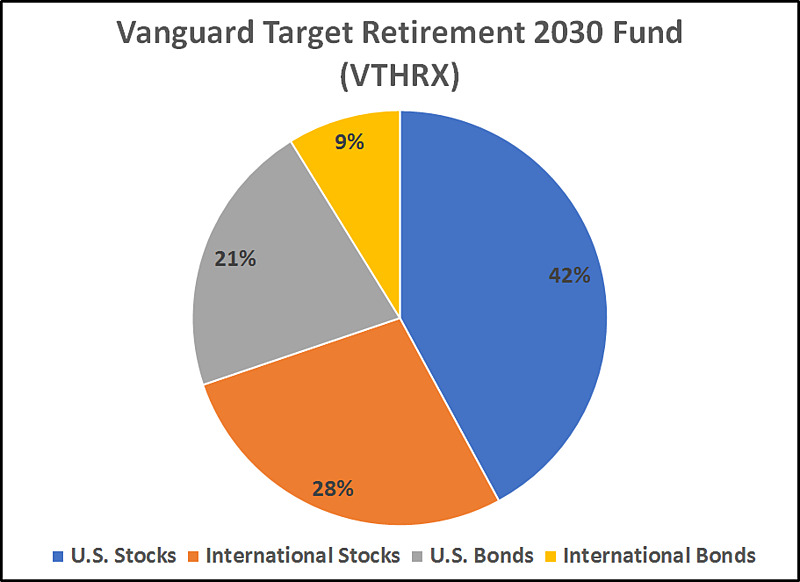 For example, as shown above, the Vanguard Target Retirement 2030 Fund (VTHRX), which has a stock/bond mix of 70/30, has a 9% allocation to international bonds—nearly one-third of the total bond allocation. 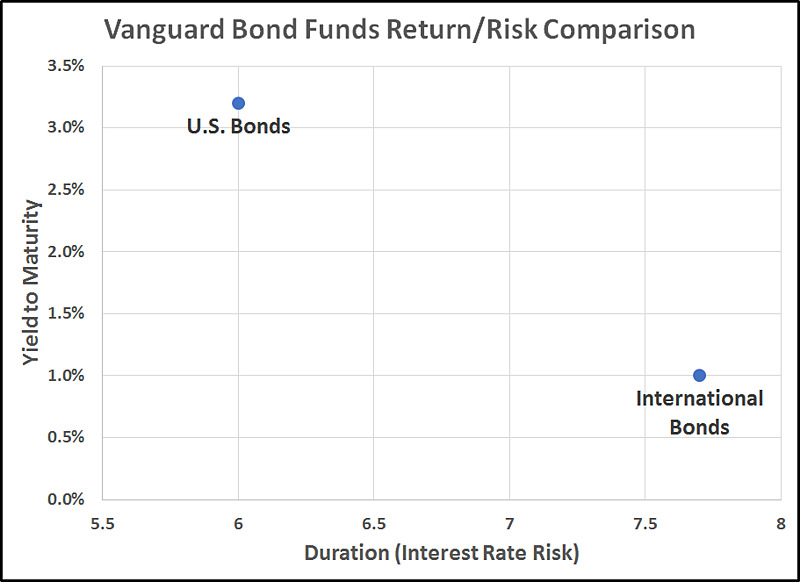 The Problem with International Bonds

The international bond fund has low yields because so many countries have extremely low government bond yields, especially in Europe and Japan. The graph below shows a history of the declines in the 10-year government bond yields of the three countries that are the largest components of the international bond fund (VTBIX).  Japan (20% of the fund) yields -0.04%.  France (12.0% of the fund) and Germany (9.5%) yield 0.46% and 0.08% respectively.  By comparison, the 10-year U.S. Treasury yield is 2.6%.  Recently, about 25% of international government bonds have had a negative yield. 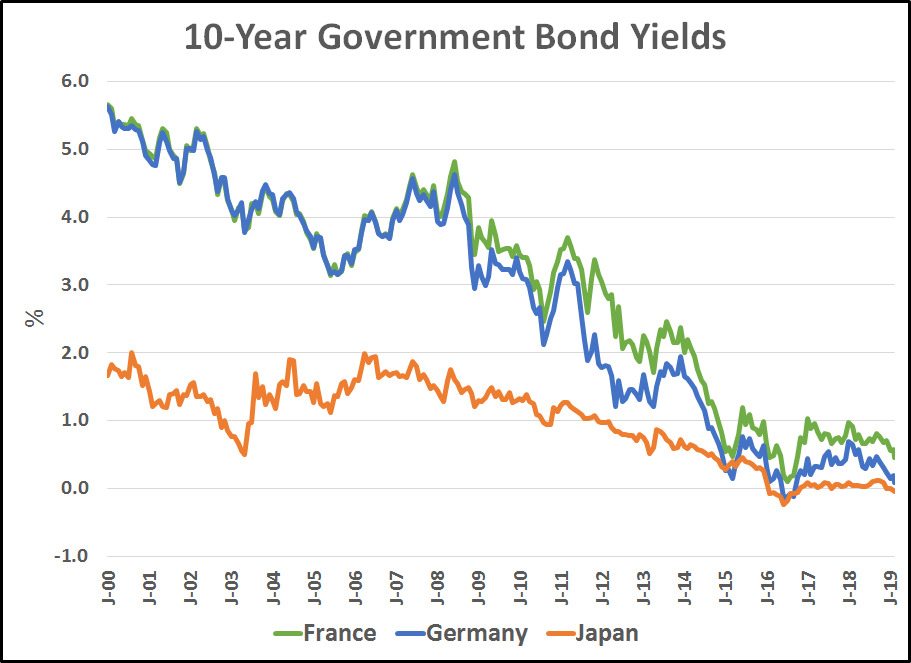 How can bonds have a negative yield?  What causes that?  I have written before on this subject.  To summarize briefly, the explanation lies with government intervention in bond markets.  Central banks have become the most important buyers of government debt, and their policy goals drive them to keep buying no matter what the interest rate may be.  Also, financial institutions, mostly banks and insurance companies, are pushed to buy government debt by their regulators.  The point is that these buyers are not motivated by an arms-length assessment of risk and return. The artificial forces pushing up the prices of these government bonds make them very unattractive to anyone but those motivated by considerations other than economics.

No one else with their eyes open would buy these things. I am sorry to say, it appears that Vanguard’s faith in market efficiency has blinded them to the reality that much of the international bond market is not operating freely.  With over $27 billion invested in Vanguard’s Target Date Funds, a lot of investors are (probably unknowingly) being taken for a ride.