Although they are often excellent diversifiers of equity market risks, government bonds are not likely to be good investments going forward.  Their yields are low (or in some cases, negative!).  The marginal buyers for government bonds are often motivated by considerations other than risk and return.  This keeps their prices structurally above the levels that would make them attractive to most investors.

Today nearly 25% of international government bonds (outside the U.S.) have a negative yield!1  Why would anyone in their right mind buy these things?  Clearly, the buyers are not motivated by return.  What is motivating them?

The most important buyers of government bonds are central banks.  They are motivated by policy and politics. They have enormously deep pockets.  If they decide on a policy of raising or lowering rates, heaven help you if your portfolio is positioned contrariwise.  Their tendency is to be continual net buyers of government bonds, which has the effect of raising prices and lowering yields, making them less attractive to other potential investors.

Many financial institutions are forced to own government bonds because of various regulations.  Because they are viewed as “riskless” investments by regulators, government bonds are heavily favored.  Banks, insurance companies, and certain trusts are more-or-less compelled to own a hefty portion of government bonds in their portfolios.  Similar to central banks, the presence of these institutionally constrained investors in government bonds has the effect of increasing their prices and lowering their yields, making them less attractive to other investors.

Bond index funds own government bonds simply because they are part of the index.  For example, U.S. Treasury and Agency bonds currently comprise 34% and 25% of the Barclays US Aggregate Bond Index, respectively, for a total weight in the index of 59%.  Passive investors are forced by buy a pro-rata share of every bond that the government wants to sell, regardless of the yield offered or the level of interest rate risk.  (Longer maturities have higher risk of loss if interest rates increase.)  The federal government issues bonds at maturities in its own best interest, which is not likely to coincide with the interests of the bond buying public.  Why let the government dictate the percentage of your bond portfolio in Treasuries and Agencies as well as the composition of the maturities you will hold?

Investors who are motivated purely by their own risk and return and unconstrained by other considerations are likely to find systematically under-weighting government bonds to be an optimal strategy much of the time.

Investors today understand the advantages of investing in capitalization-weighted index funds.  These funds, such as the Vanguard 500 Index Investor Fund or the Vanguard Total Stock Market Index Fund, provide investors with a very inexpensive way to own the entire market, as defined by the underlying index.  A stock’s “capitalization” is the number of shares outstanding multiplied by the price per share.  There are strong theoretical reasons why owning a pro-rata share of “the market” is believed to be the best return/risk investment available—that it is “optimal.”2  Also, the empirical evidence strongly suggests that outperforming the market is very difficult, and that attempting to identify fund managers who will outperform in the future is likely to be a futile effort.3

For bond index funds, capitalization is the market value of the outstanding debt.  Thus, companies and countries that issue the most debt have the highest weights in bond index funds. If a company or country doubles its outstanding debt, it will get twice as much weight in the bond index as before.  However, the issuing entity’s creditworthiness has markedly declined because their debt level has doubled.  Capitalization-weighted bond indexes (that weight according to debt outstanding) systematically give the highest weights to the weakest credits.

Some research regarding “fundamentally-weighted” bond indexes has found that using measures of size other than outstanding debt provides superior return/risk outcomes.4  This is an indication that capitalization-weighted bond indexes are not optimal. Also, while active managers of stock mutual funds overwhelmingly fail to add return relative to their index benchmarks, a larger percentage of active bond fund managers is successful in adding alpha over their benchmarks,5 providing further evidence of bond market inefficiency.

At least corporations cannot keep issuing more and more debt without their interest costs escalating.  More debit issuance will likely lead to lower bond ratings.  Issue too much debt and the entire corporation can go bankrupt.  This provides some discipline for corporate boards and officers.

Not so with government issuers.  Yes, government bonds often have ratings, and they can be downgraded in light of excessive debt issuance, but personal risks for the decision makers is largely absent.  They have no “skin in the game.”  Democratically elected politicians are in office for only a few years.  Debt-financed government spending has immediate political rewards.  Its costs and risks will only show up years later.  National governments have the ability to print their own money, so there is no risk of bankruptcy as long as debt is in the local currency.  Some emerging market borrowers are forced to issue debt in “hard currency” such as the U.S. dollar, but even in those cases the political calculus often favors debt issuance while it is available and repudiation afterwards.  Local governments can’t issue their own currency, but the risk of bankruptcy is low and well down the road.

Since the Great Recession, central banks have been pursuing a policy of “quantitative easing,” which has forced down yields on government bonds of all maturities.   After driving short-term rates to zero or less, they noticed that their economies were not improving sufficiently so they started buying up longer-term bonds to drive down those yields and encourage lending and investment.  Their very aim was to discourage the ownership of low-risk government bonds by making their yields unattractive.

While they may not have succeeded in sparking economic growth, central banks have certainly succeeded in forcing down yields on government bonds, making them unattractive to most investors.  As mentioned above, nearly 25% of international government bonds have a negative yield!

At least in the U.S., the Fed has stopped lowering rates and has begun to raise them.  (See graph below.)  The result is a one-two punch to bond investors.  Not only are yields starting out low, which means prospective return is low, but for every increase in rates, bonds prices decline and bond owners suffer a loss. 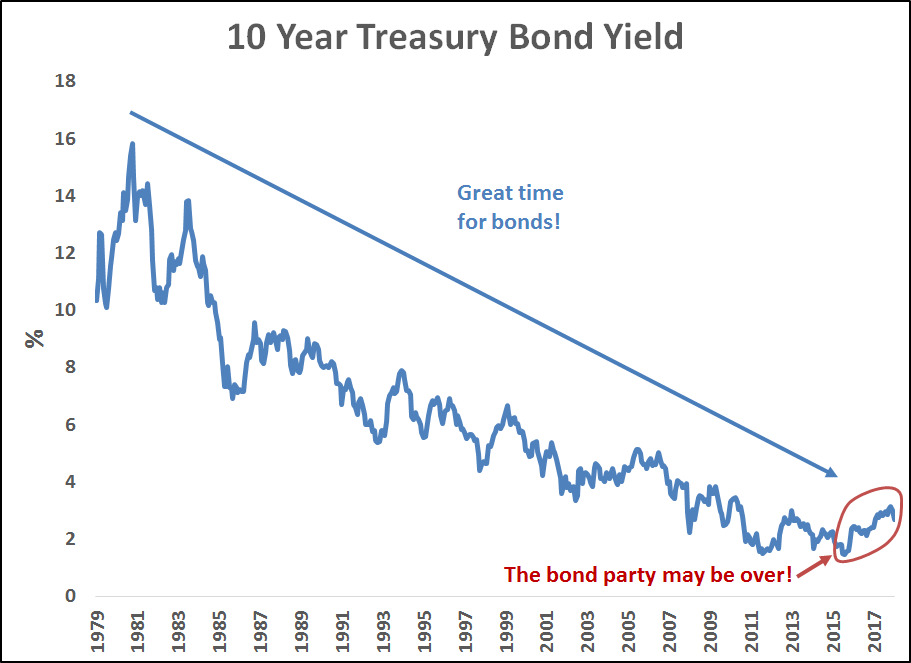 The U.S. government is in the enviable position of issuing bonds in the world’s reserve currency with a credit rating that (despite the downgrade from S&P a few years ago) is widely considered the best in the world. The comments above concerning the lack of capital market discipline are particularly applicable to the U.S. government.  Worldwide interest in U.S. Treasuries helps to keep the cost of debt issuance very low.  So does Treasury bond buying on the part of the Fed.

From this pinnacle of popularity and creditworthiness, there is a risk of erosion.  As my colleagues on the bond desk used to say, “nothing good can happen to a AAA credit.”  As other currencies become more popular for central bank reserves and in facilitating global trading, the U.S. dollar may get taken down a peg or two.  If U.S. inflation heats up, perhaps because of ballooning government deficits and over-accommodation by the Fed, the dollar may lose some ground to other hard currencies.  If the U.S. economy weakens, perhaps because of tax and regulatory policies that strangle growth, currencies of other markets may become more attractive.  Nothing lasts forever.

However, for the time being, the U.S. dollar and U.S. Treasury bonds are special.  Whenever there is a whiff of concern in the market, the resulting “flight to quality” boosts the prices of U.S. Treasury bonds, providing proof of their “safe haven” status.  The provides a special benefit from a portfolio risk control perspective.   Historically, Treasury bond returns have had the lowest correlation with stock returns of any  asset class.  Often the correlation is negative (a rarity among asset classes), particularly during times of market stress, which is just when diversification is most important and low correlation most valuable.  However, like all insurance policies, this protection comes at a cost:  low expected return. 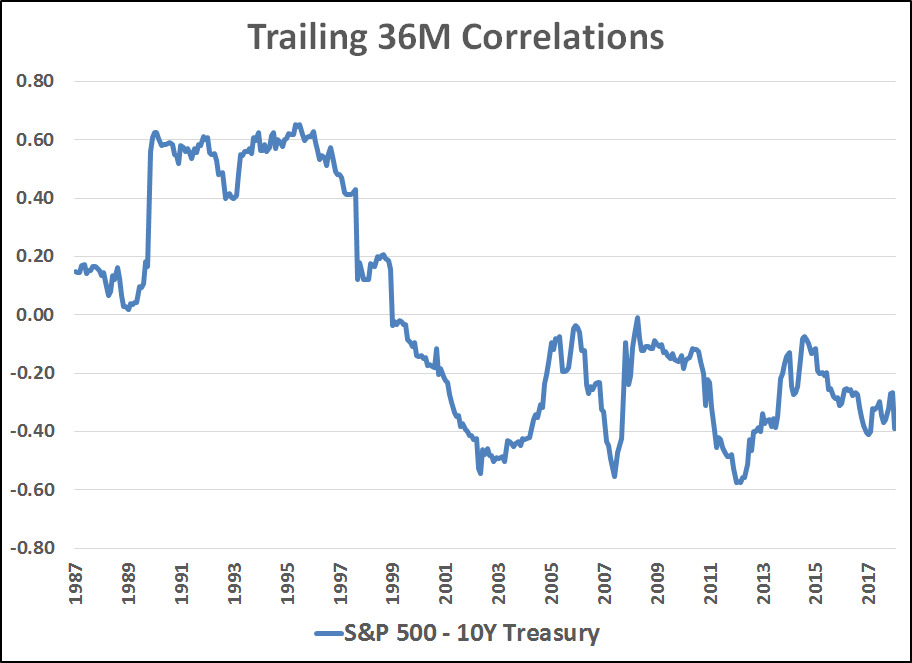 Investors with short time horizons or who are extremely sensitive to short-term volatility may still find U.S. Treasuries attractive because of their low correlation with stocks, but long-term investors should probably under-weight them because of their low expected return and the risk of negative returns as interest rates normalize in the years ahead.

3 The seminal work on performance persistence is Carhart (1997).  S&P publishes frequently updated work in this area including a “Performance Persistence Scorecard.”

4 Research Affiliates is well-known for their work in this area.  It has been independently verified and updated in Smits, Cizek, and de Vries (2016).

5 Gutierrez, Maxwell and Xu (2008) find that “top decile [corporate bond] funds over the past year outperform the bottom decile, net of expenses and trading costs, by ten basis points per month over the next four years for high-quality funds and twenty basis points per month for high-yield funds. This persistent performance seems due to the bond-selection skill of the winning managers.”