Why Have Any International Equity?

There are two primary schools of thought with respect to this decision.  Those who believe in the efficiency of the global stock market argue that the optimal portfolio is a representative slice of the overall global equity market, which tends to be around 50% U.S. and 50% international.  Many academics would fall into this category.  Those who believe that the U.S. stock market is vastly superior to other markets would urge an allocation of 100%, or nearly that, to U.S. stocks.  Warren Buffett famously holds this point of view.

My position is in between these two extremes.  I believe that a strategic allocation to international stocks should generally constitute roughly 25% to 33% of the overall stock allocation for a U.S. investor.  I’ve written more extensively about this before, but in short I believe that a considerable tilt towards the U.S. (called a “home market bias”) is warranted for U.S. investors, because

On the other hand, completely avoiding all international equity investments may miss some very attractive opportunities.  According to Statista, after adjusting for purchasing power parity, U.S. GDP is projected to be less than 15% of global GDP in 2020.  And according to Worldometer, U.S. population is only about 4.25% of global population.  Also, economic growth rates in other countries are often much higher than in the U.S.  Emerging and frontier markets often have particularly high economic growth rates, and they also tend to have a lower correlation with the U.S. stock market, providing an important diversification benefit.

The long-term return/risk data seems to support the idea of a 25%-33% strategic allocation to international equities as a reasonable percentage of the overall equity allocation.  The graph below shows the return/risk results for various combinations of U.S. stocks (benchmarked by the S&P 500) and international stocks (benchmarked by the MSCI ACWIxUS Index). During the sample period since December 31, 1987, international stocks returned 7.4% compared to 8.9% for U.S. stocks. However, there is no compelling reason that the U.S. stock market should be expected to outperform over the long-term. The main point of the graph is to illustrate the fact that, although the volatility of both was about the same, combining the two did provide a diversification benefit and lowered overall portfolio risk. 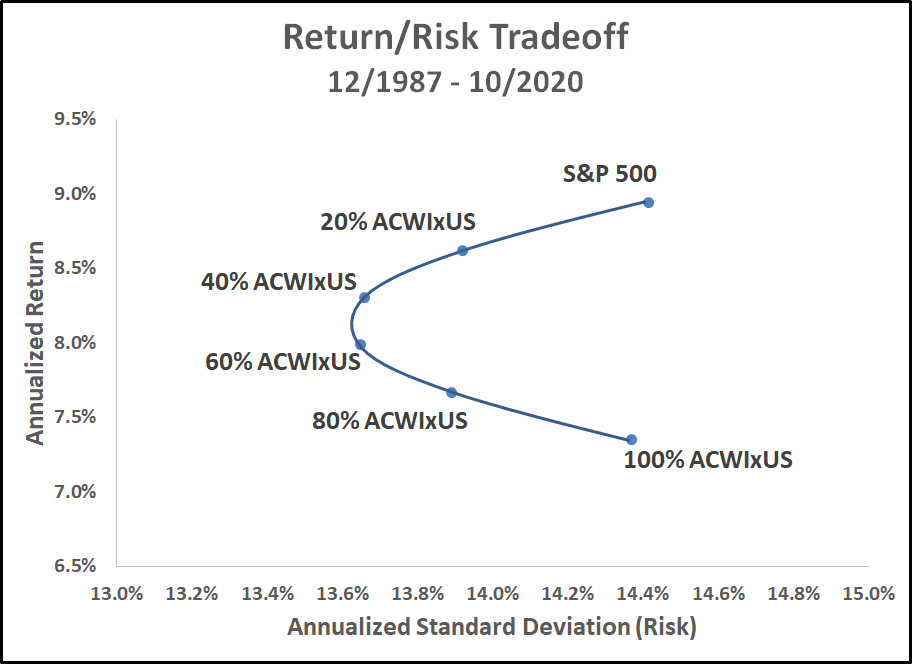 Why Hedge  the Currency Exposure?

Fischer Black was one of the brightest financial minds of the 20th century. He is perhaps most famous for his work with Myron Scholes on the Black-Scholes option pricing model, for which Scholes won the Nobel Prize in economics in 1997. Sadly, Black had died of cancer two years before, and since Nobel prizes are never awarded posthumously, he was not included. Black could just as easily have won a Nobel for his work with Robert Litterman on the Black-Litterman model for asset allocation or for his work with Jack Treynor on the Treynor-Black model for security selection.

Black is also known for his work on “Universal Hedging,” which was published in the Financial Analysts Journal in 1989.  I still have a photocopy of that article with my notation at the top indicating that “Black ought to be in line for a Nobel Prize for this work.” (Yes, I have been at this for a very long time.) Black’s model yields three conclusions:  1) hedge foreign equity, 2) hedge less than 100%, and 3) hedge all countries equally (hence “universal” hedging). Although his work is based on theory not on any particular historical period’s data, in his article he illustrated his conclusions using data from different historical periods, one assuming higher world equity market returns and one assuming lower returns. Then he varied the assumptions regarding equity and currency volatilities. His formula yielded widely varying universal hedge ratios of between 30% and 77%, with higher hedge ratios for higher returns and volatilities and lower hedge ratios for lower returns and volatilities. Some have simplified his conclusions by assuming that hedging about 50% of the foreign currency risk of international equities is probably a reasonable default position.

Taking a more empirical approach, a 2010 article by Campbell, et. al. argues that for investors whose base currency is a “reserve currency” such as the U.S. dollar, the Euro, or the Swiss franc, the optimal risk-reducing hedge is 100%. The basic idea is that during periods of stress, reserve currencies tend to appreciate, while global equity markets decline, creating a negative correlation, a characteristic which is always valuable but particularly so during a crisis.  An international equity investor with exposure to weak currencies will compound his risks by not hedging back to a reserve currency, such as the U.S. dollar. I find this argument intuitively appealing.

The notion of hedging 100% of foreign currency exposure is further bolstered by considering an asset-liability perspective. Since most U.S. investors are expecting to fund future liabilities (such as retirement spending) that will be denominated almost exclusively in U.S. dollars, holding non-dollar assets incurs an asset-liability mismatch, increasing risk.

Whether the optimal hedge ratio for U.S. investors is 50% or 100%, the overwhelming evidence indicates that it is not zero.

Why Use an ETF?

I do not know of any actively managed  international equity mutual funds that have a consistent, well-documented policy for hedging foreign currency exposure. Fortunately, there are a number of ETFs that do. For reasons having to do with cost, style drift, and risk control, I prefer passively managed ETFs in most cases anyway. Here is a list of the 10 largest ones, provided by ETF.com:

The obvious choice for a hedged international equity ETF would be one of the two giant, cheap, highly liquid ETFs at the top of the above list:   Xtrackers MSCI EAFE Hedge Equity ETF (DBEF) or iShares Currency Hedged MSCI EAFE ETF (HEFA). However, instead of those, I recommend an investment in WisdomTree International Hedged Quality Dividend Growth Fund (IHDG) despite its somewhat higher expense ratio and bid-ask spread.  My reasons are the fund’s emphasis on:

The WisdomTree International Hedged Quality Dividend Growth Index is designed to provide exposure to the developed market companies while at the same time neutralizing exposure to fluctuations between the value of foreign currencies and the U.S. dollar. In this sense, the Index "hedges" against fluctuations in the relative value of foreign currencies against the U.S. dollar. The Index is comprised of the top 300 companies from the WisdomTree International Equity Index with the best combined rank of growth and quality factors. The growth factor ranking is based on long-term earnings growth expectations, while the quality factor ranking is based on three-year historical averages for return on equity and return on assets. Companies are weighted in the Index based on annual cash dividends paid.

To be clear, the index constituents are weighted not by dividend yield but by the aggregate value of dividends paid. This means that larger companies get a higher weight, though less so than would result from straight market capitalization weighting.

Many studies on factor anomalies confirm the attraction of tilting towards a combination of profitability, growth, and value. The reward to these characteristics has tended to be even larger in international markets than in the U.S. This is a “smart beta” multi-factor fund.

IHDG’s factor tilts have worked quite well.  Since IHDG’s inception on May 7, 2014, the fund’s average annualized monthly return has doubled the return of international equities generally:  9.0% for IHDG compared to 4.4% for the MSCI All-Cap World ex-USA Index, for an excess return of 4.6% per year.

Part of the excess return has been derived from IHDG’s significant sector tilts. The fund’s emphasis on profitability no doubt has a lot to do with its over-weights in healthcare, technology, and consumer sectors, and its under-weights in energy, utilities and most especially, financials. A reasonable question is whether the out-performance of the former and the under-performance of the latter sectors is likely to continue. Academic studies of various factor anomalies related to firm profitability have found relatively strong and long-lasting effects. Generally, returns to factor anomalies are stronger in international markets than in the U.S., particularly after the anomaly has been publicized.

One of the differences between international and U.S. equity investing is the role that foreign governments tend to play with respect to corporate governance. Particularly in some sectors, such as financials, energy, utilities, and telecommunications, governments often either own significant equity outright or they exercise heavy influence through regulation or both, which tends to depress the profitability of corporations in these sectors. This is a more-or-less permanent state of affairs and is not likely to change significantly. Arguably, the prices for stocks in these sectors should reflect their lower profitability, but the historical evidence indicates that investors tend to under-appreciate the persistence of profitability. 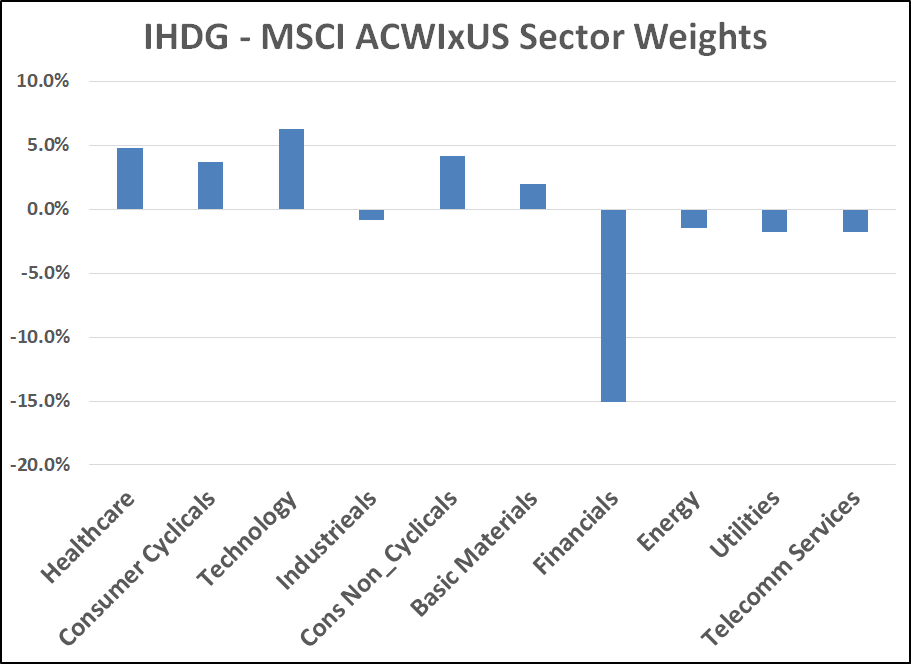 Perhaps surprisingly, other than sector weights, IHDG’s characteristics are not that different than the overall international equity market.   Country weights are similar.  Size (market cap) is only slightly larger. P/E is somewhat lower, as is dividend yield.  Perhaps because the constituent companies are higher quality and less financially distressed, the market beta is only .77. In short, this is a fairly market-like portfolio that is tilted on characteristics that have a history of both boosting returns and lowering risk.

It would be easy to assume that most of IHDG’s excess return stems from its sector weight differences from the benchmark. However, WisdomTree publishes detailed performance attribution for its funds that provides much deeper insight. The table below is their attribution according to sector since the fund’s inception. (Their 4.3% alpha is a bit below my figure of 4.6% above perhaps because I did not include performance for the initial partial-month period.) Note from the table that sector allocation contributed only 1.52% to the total alpha of 4.31%.  The contribution from stock selection of 4.64% was much more significant. (In this context, “stock selection” captures all effects other than sector selection.)

The point is that the origins of IHDG’s excess return go far beyond its sector weights.  Other performance attribution reports indicate the following since-inception alpha contributions:

Why is Now a Good Time to Invest?

International equities have been more-or-less steadily underperforming U.S. equities since the Great Recession. Since that time the cumulative return difference is more than 50%, an historical extreme. 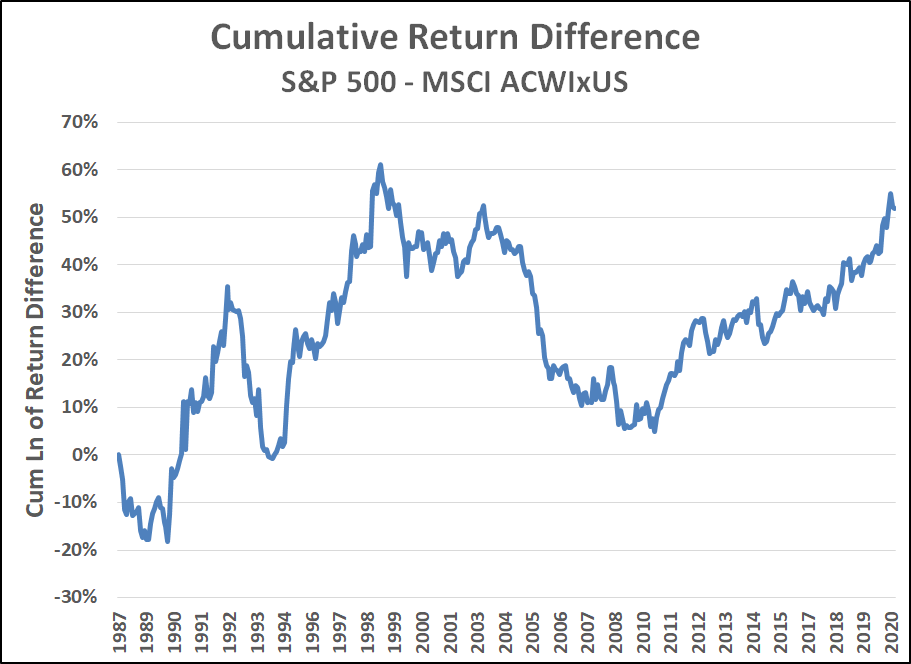 I do not know when that may occur or what may trigger it. It could be the available of a vaccine for Covid-19. It could be a U.S. inflation scare. It could be an increase in income tax rates on U.S. corporate profits. It could be increased regulatory costs imposed on U.S. companies. It could be any number of things. But sooner or later, it is likely that competitive forces will cause some degree of mean reversion.

History indicates that the more extended the divergence, the stronger the mean-reversion. The graph below relates cumulative return difference between the U.S. and international stock markets with the return difference in the following 12 months. It is a strong negative relationship.

The current level of cumulative outperformance of the U.S. over international markets is 51.8%. As shown below, based on past behavior, there is a strong likelihood that some mean-reversion will take place within the next 12 months. 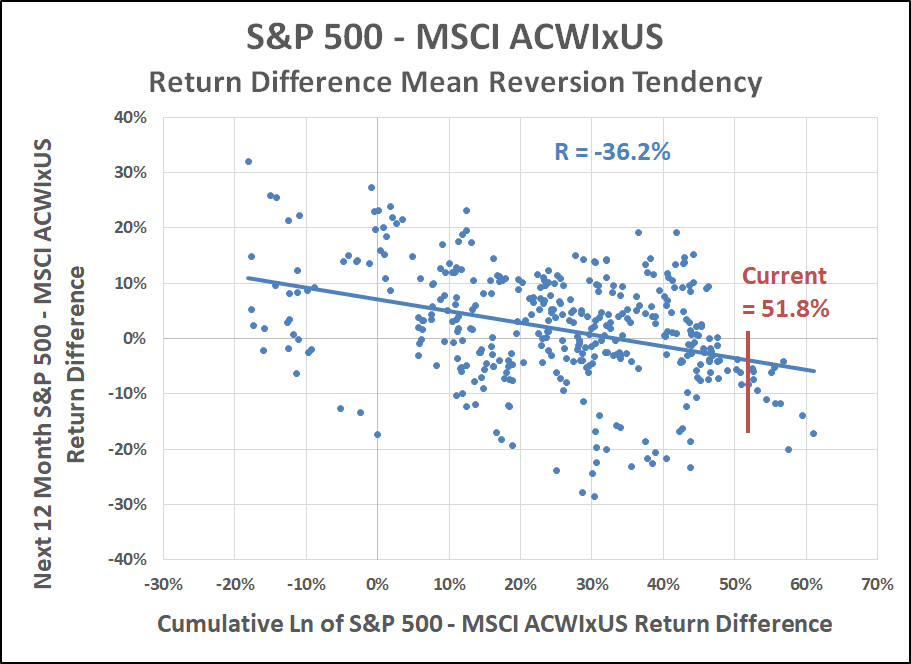